First, the important news. I had a normal run today! Short, but normal. Plus it was actually hot out, probably just over 20 C.

Even though just a few people showed up, we had a wonderful book club meeting, talking about life, the universe, and everything. Afterward I zoomed over to look at the picked over shelves at Yum, and got us a couple of lemon tarts. The little cheesecake thingies we wanted were all gone. But that's the story of going late to Yum, what you want will be gone, because this is a seriously popular bakery, with seriously popular stuff. You know, now that I think of it, I don't know why I'm telling you this. I'm so lazy and slow, and sleep in so much you will be ahead of me in the line, and then I won't get what I want.

Lots of limbering up for the run, with some mobility stretches, and walking briskly about 5 minutes. I was thinking I'd let my legs do what they wanted, for as long as they wanted, and stop before they overdid it. 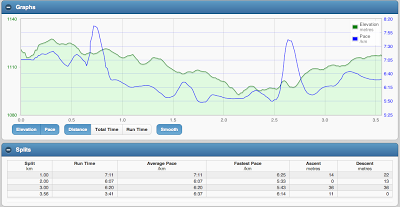 The first rise is a quick stretch at the 37 St intersection to adjust my shoes. From there it came together and I ran easily and naturally down the path to 132 nd Ave. This felt great! I don't think it was the mythical runners high I keep hearing about, but my legs felt strong and stable. About the 2.5 K pace I could feel things start to tighten up a bit and my breathing getting a bit behind the heat, so I walked for just a bit, shaking out my legs, then ran easy a bit more.

Total was 3.5 K in 23:20 with one walk break. My legs felt better after today's run, than they did before  Friday's run. It was about a 10 minute walk back to the house, enjoying the warmth. Good stretch session after.

For the people that know me, and know I've been recovering from cranky leg syndrome, this is good news. I've been thinking about information lately, and how it gets delivered to us.  I use Zite, LinkedIn, Facebook, blogs, and Twitter as my main means of learning about the world because I can control what shows up, at least to some extent. Not control, as in living in an echo chamber. I mean control to weed out stuff that is not news. I used to read paper newspapers, and listen to radio news, and do so very little now. It's a crap shoot if the radio crash reporter will tell me anything that Twitter hasn't already.

The problem is that so much of what is available to us is not news. For me, anything about a celebrity is not news. Their entire lives are a script, not just the latest movie, or TV show, or art project. Everything. Marriage. Divorce. Children. All of it designed to enhance what is called a career. I don't care about any of them. There might be a real person under the image, but I doubt it., and for the ordinary person, how could you tell?

Let me explain. If I go for coffee with a buddy, that's what we do. It's nice. Generally I can tell if buddy is upset, or happy, or worried about something. Maybe they don't talk about it, maybe they do. But in any case, it's a natural state of feeling. With an actor, how could you tell? For all you know, they are practicing a role in their head. Their professional lives are devoted to fooling people. How could you ever trust anything they say? Why would you ever want to hang out with a person like that? Why is the media so interested in feeding such fake stories to us? What could they be trying to distract us from?

Professional sports are not news, unless you know an athlete in that sport personally. No, I mean, personally, that you were buddies before they hit the big leagues, and still are now. How they do is legitimate news to you, but really, what you want to know is how your buddy did. What the score happened to end up being isn't particularly important. It's a distraction, along almost exactly the same lines as the Roman Circus. We already have thugs beating each other up with essentially no rules for the blood lust of the mob. It's only a matter of time till weapons more deadly than fists come into it.

So one buddy gas a son who plays in the NHL. She is passionately interested, and understandably so. I know one professional triathlete well enough for her to recognize me in a restaurant and remember my name. I'm certainly interested in how she does during races. (She was 7th in her division today, so I hope that's a bit of prize money and points toward Kona.)

A blog buddy I've never met, but would like to someday, was at an autograph session that featured Craig (Crowie) Alexander. He is arguably the most famous male triathlete currently active. I'm not an autograph collector, but if I happened to be there, I'd be trying to hang out with my blog buddy, and any of the several other blog buddies that live in that area. His autograph would be meaningless to me, and any conversation with him there would be banal.

What else isn't news? Anything in the real estate sections of the newspaper. Every bit of it is advertising designed to separate you from your money. Anything to do with the fashion industry. See celebrities, and separating you from your money.  The travel section is more not news. As is almost anything about technology (out of date by the time a newspaper notices and convinces an editor to let it print.)

Much of the business section is distraction, but there is important info there if you're willing to dig a bit, and read behind the headlines.

Some disasters are news, like a huge tidal wave affecting millions of people. Knowing what has happened allows you the option of directing money for assistance, or maybe going there yourself if you have relevant skills. Of course if you have friends or family involved, you will be passionately interested, and rightly so.

But, say, a building collapse that kills hundreds of garment workers? I'm sorry, but that isn't news, not particularly. (However it is, if you know someone who works in it, of course) Google the triangle shirtwaist factory fire. It happened more than 100 years ago, and led to changing the laws around industrial safety. All that happens now is essentially the same event in different locations, right down to the locked fire exits. It's the inevitable result of letting big corporations cut costs and escape responsibility for their supply chains. People become an expendable commodity. Not news, just tragic that it happens again and again. There are two drivers. The people demanding more and cheaper goods, That's YOU, Mr and Ms America-I-must-get-it-for-cheaper. Add corporate pressures to cut costs so they can pay senior managers and owners more, deserved or not, and you know the result.

Almost anything on TV and radio news isn't really news, it's what they want to tell you to hide the news from you. They have lots of hours to fill, and they don't want to make the advertisers unhappy.

So what IS news, in my humble opinion? Pithily, anything that any government or corporation doesn't want to you know. So for example, Stephen Harper, the self-vaunted economist and business manager has lost 3.1 BILLION dollars. Yes, with a B. Not lost, as in spent more on a venture than was returned. They would like you to believe lost, as in temporarily unaccounted for. No big deal, move along, move along. Look, a polar bear!  I have darker suspicions.

There are about 20 million tax papers these days. 3.1 billion dollars is $155 per person. I don't know about you, but I would notice a $150 hole in my bank account.

So where did it go? Nobody knows or so they say. To me, this is a major news story. We should be getting hourly reports of the search, audit results, places they are looking, a detailed list of the rocks they are turning over, along with anything else interesting they find. HOURLY!! Day and night. All hands on deck. There are lots of civil servants, how long could it take, if they really wanted the answer?

The reporters should be on Harper like the white on rice. The opposition parties should be all over him like the stink on shit. I have so little trust in Harper, I'm almost willing to believe that he and his buddies stole it and stashed the proceeds. I love me a good conspiracy theory, and with a bit of work I could probably construct one, but Harper is not a stupid man, not by any means. He knows there was a leak of names and nationalities from one of the secret banks, and where it could happen once, it could happen again.

And that's another thing, for a brief digression. The tax people chase ordinary Canadians for trivial amounts of money on taxes, sometimes from an honest error, sometimes from a misinterpretation of the rules. But these wealthy tax cheats? They get a deal. That's news too. Don't get me started on corporate subsidies.

Back to the ever loving 3.1 BILLION dollars. There are 166 Conservative members in Harper's government. Doing the math, that's just over 18 million each. I'm just saying, to save you the trouble of finding a calculator. Minus a bit for accounting fees (what they call money laundering when people who don't contribute to their campaigns do it) and you've got a very nice top up on an already very generous pension. I'm not saying I think they took it. But the longer it takes them to find it, and explain how it happened, and how they'll prevent it from happening again, and to roll the head of the minister(s) responsible, the more plausible an explanation it becomes.

In almost any scandal the rule is "follow the money". If the people in charge don't let the investigators do that, there are only two conclusions. They are incompetent, or the trail leads to them and they know it.

Anything that any level of government does that involves our taxes is news. They are our elected representatives, spending our money on projects that are supposed to benefit all of us, at least in abstract. In fact, building a highway, for example, really only affects the people nearby, though any of us could go there and drive on it. We should all be getting our fair share of highways.

But however it comes, all of us should be getting value for our tax dollar. The web makes it easier to learn what is being done in our name, or is being done to obstruct those efforts. But you still have to go look, and when necessary, help raise hell about it.

Stephen Harper is killing the Canada I grew up in. He is turning it into a Fascist state, and yes, I know exactly what that word means. Before you leave a comment based in ignorance, go look up Fascism. Here, I'll save you the trouble.  They don't all fully apply to Canada, not yet. But they apply a lot more under Harper's government, than any other previous government. And this process is news, with a capital N.

The more you watch not news and let yourself get distracted, the more the people in charge will do whatever will benefit themselves and their friends.