Lots of things today. Here's a photo from one of our vacations in Nova Scotia, taken on Hirtle's beach. I loved it, and you'll see a bunch of photos from there show up on my cover page from time to time. You see a bit of the spray coming of the waves. I watched that for hours one day. There are few things as restful as a beach. 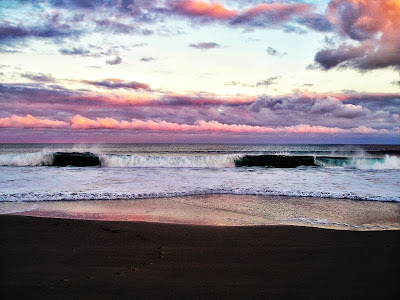 Swam this morning, 30 minutes and water ran another 15 or so. That helped the muscles from yesterday's run. It was an odd swim, though. I was swimming with my arm muscles, which I haven't done for a while, so it was kind of slow and really tiring. I'm not sure why I was doing that.

In response to reader requests, here's the bottle of wine for tonight. The label is a nice copper foil that I thought went well with the lily in the background. It was bottled July 16, 2011. I poured, swirled, and sniffed. And sniffed and sniffed. It smells like wine. I conclude that I don't have a good sniffer. It's a nice clear light ruby red.

Taste. It's a lighter wine that rolls over your tongue with a gentle and slightly sharp fruity taste. No one particular fruit taste beyond grapes and blackberries. It makes my mouth tingle just a bit. Where some wines come in with a full blown assault on your tastebuds and hang around to see what else you're going to eat or drink, this is milder and better behaved. You taste and swallow, then get some echoes that fade away. Then you want more. I find it goes well with almost anything, though it doesn't quite have the fruity or tannic punch to go with really spicy foods. You could easily have this with fish if you wanted, or a nice lamb roast with traditional veggies, but probably not with chili or a pepper steak, or jerk chicken. 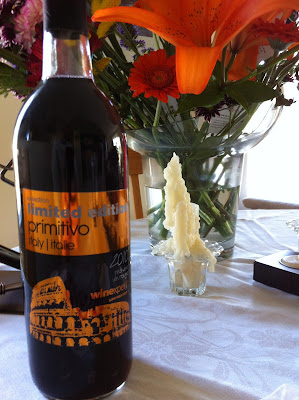 By comparison, here's what the teaser ad for the wine says.

The Region:  Puglia forms a long narrow peninsula, making up the heel of the boot of Italy.  Dry and warm, it basks in the Mediterranean sun, and has a long, rich history of grape growing.  The Appenine mountains give an excellent range of elevations and soil types, and this region produces more wine than any other in Italy, specializing in intensely ripe grapes from its hillsides.
The Wine:  Italian Primitivo is deeply colored, rich and concentrated, exuding aromas of blackberry, plums, tobacco, prunes and red cherries, with the Italian signature of firm tannins and a long, gripping finish with notes of vanilla and toast.  While deep and intense like most Italian reds, it retains acidity to balance fruit character and marry well with food.
The Food:  Primitivo shines in the company of assertively flavored foods like lamb, pork, grilled beef, ribs, roasted red meats, wild game, spicy cheeses, and pizza.  Its firm backbone of acids and tannins makes it work well with rich and spicy foods like Italian sausages or lasagna.
Ageing:  Medium-bodied but with good grip and intensity, this wine will begin to open up after six months, the richer flavors will show at twelve months.


Last word. One of the tests of wine is how it tastes by itself. No cheese or crackers, no mouth cleansing with gelato, no little nibble snacks. Just drinking the wine. And chatting or reading, or whatever. How does it taste after a glass of it? Still tasting good? Some wines you get tired of after a glass because there's just so much stuff happening. This Primitivo isn't so dramatic. It's balanced so that you taste it everywhere in your mouth. Even after two glasses. And a bit of a third, just to try to answer the question of what it tastes like. Which is proving harder to describe than I thought it would.

One of my blog buddies asked about people wearing their race medallions. I don't, but they are hanging near the computer where I can see them. Right now, even. 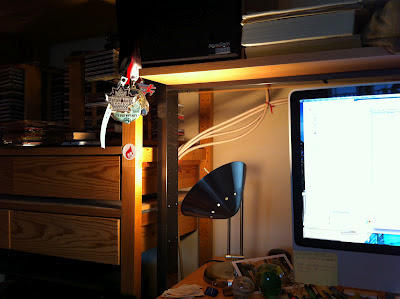 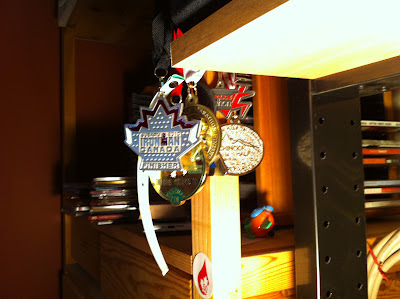