The Calgary Farmer's Market is one of our favourites. Can you say Yum Bakery and High Country Bison? And lots of others. Today, there was food trucks for Sundown Chowdown! I looked forward to this all day. I've been wanting to try Alley Burger.

We got there a bit early, knowing that it would be popular, and the parking a total zoo. Worse than that, a rodeo at the zoo. The trucks were lined up on the service road beside Blackfoot Trail for max visibility. They formed a little laager with about a dozen trucks. Here's what it looked like essentially empty before most of the trucks opened. 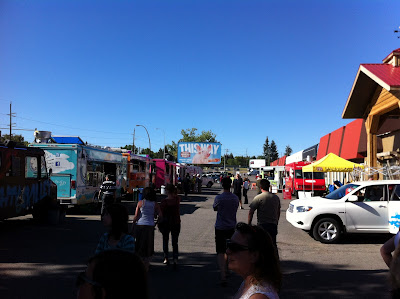 Linda went to the Naaco truck and got this. I don't know what it is. Lots of veggies and quite tasty. 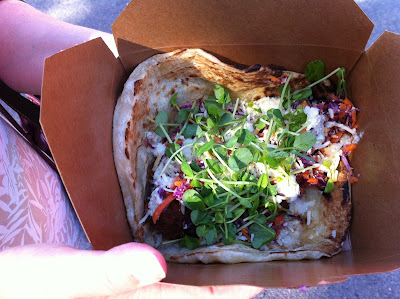 Then the trucks all opened up, and that area essentially became a sea of line ups. There is something fun about the food truck line ups that make it acceptable to chat with the people around you. It must be very gratifying to see people lined up for your stuff. Even though we got there about a half hour ahead of time there were about a dozen people in front of me. This is the Whole Truck, with poutine. It's a good thing I was hungry. That is a monster, very very tasty burger! I can't imagine getting two, or even three patties. The very idea of poutine used to repulse me, but lately I've been kind of craving it. 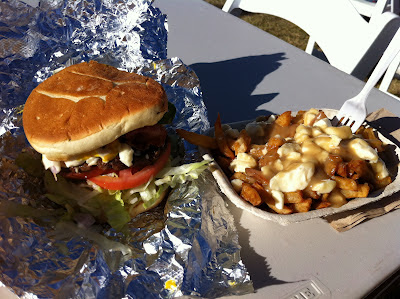 That was a lot of food. We wandered through the market getting some other stuff, and left as the crush was really getting on. Sure enough, trying to get into the lot was a mess. A couple people were directing traffic, and one idiot was holding up the entire show by being a jerk, INSISTING there was parking in the lot. I'm writing this at home, drinking some wine, and can feel the torpor building. If we had stayed at the market I might have fallen asleep in the sun or something.

Here's a shot I took while out for a walk the other day. 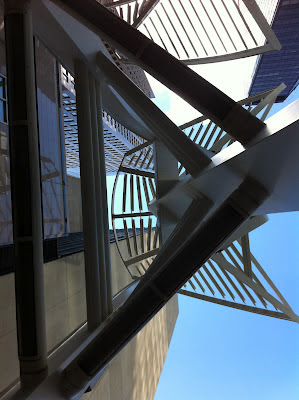 I just updated my Facebook cover page with this photo. It might be the canal beside Penticton, or something else. I can't remember, and I don't even have the context of surrounding photos anymore. There were a whole bunch of photos that I thought would look good dressed up by Snapseed so put a bunch in a folder and will work on them as the mood takes me. 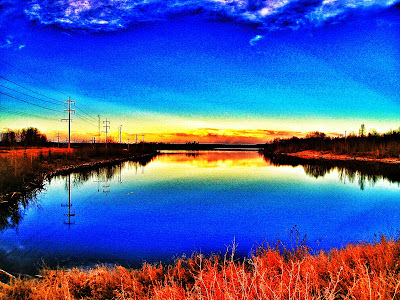 Lastly, one of my faithful readers suggested I write a bit more about my wine. I could have a go at it, but I'm not sure what I'd say, since it's hard to describe how wine tastes without sounding like a pretentious prig. Is that something people would be interested in, to see a photo of a bottle, and me talking about what it tastes like, where it's from and all that? Silence implies me doing whatever the heck I want, but I do try to respond to the people that comment.