Here's the results of the weekend bottling. 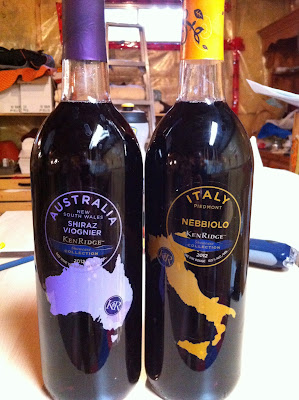 The Nebbiolo is ready to drink right now and very nice if I do say so myself. The Shiraz is a bit sharp and doesn't have much depth yet, but I think it's going to be a winner. I put a note in my book to give it 6 months.

Those labels look really nice, but the Nebbiolo was a pain to put on. These sorts of labels often are a rectangular piece of clear sticky plastic, with the design in colour. They peel off just fine and don't leave a residue. These ones the clear background follows the design fairly closely so I had to be more careful than usual.

I was going to do an inventory, which I like to do every now and then. Just because. Yes, I know I'm a geek. Last time I somehow got the list onto my phone, and I added the numbers onto my computer back upstairs again. But I forget how I did that. I got an xl onto my phone and I could read that ok, but I couldn't add numbers to it. Maybe I did it as a text document, or maybe using Evernote. It's getting late. I'll figure it out Thursday. I know just from the empty spaces on the racks that I've got just over 400 bottles. I don't think that's a Ryan estimate.

The pool was not crowded this morning, much to my surprise. Only 25 m lanes though. 500 m warmup just over 9 minutes. Lots of dolphin kick and pull. Then 6x50 m on 1 minute, all under 50 seconds, though the last one was just barely. My shoulders were starting to feel it so I stopped. They're just starting to feel better so I don't want to bang them all up again.

Water ran with my buddy Katie. Her arm is healing up, though she still isn't allowed to swim, or bend it more than a certain amount. I can sure sympathize with her because I know exactly how much it hurts, and how hard it is to avoid using it, and I didn't have to put my hair up or fasten a bra.

Work is still quiet, or at least my part of the floor is. My office roomie is on vacation so it's going to be a quiet week for me wrestling with some recalcitrant data. Why people would build a database that way is beyond me, and once built, why they would put data in that way is also beyond me.

Coming home was a bit of a fright. Lots more traffic than I'm used to, and having a suicidal cyclist down 5th Ave and Elbow Drive where it's really narrow didn't help. I watched one guy lose it because someone managed to turn in front of him, totally legit, but he couldn't take the thought of it. There was a smoker in the car in front of my. Gawd those things smell bad. I was waiting for him to drop it while we were at a light, and I was totally going to get out of my car, pick it up, and flick it back into his car. The back seat.

Then at coop a bunch of us watched in amazement as this young woman was trying to run things through the automated checkout. There's a bit of a trick to it, and the machine starts snarking to you if you take too long. So this ding dong with her is getting in her way, feeling her up, and kissing her as she's trying to get done. I was wondering if I should have said something, but they were clearly a couple. At least I think so.

Do you ever wonder if you should say or do something in a public situation?