The Bedstead Hill of Death

Run and yoga.
For a while I've been meaning to run, or try to run up the hill at the very west end of Fish Creek park, the trail that leads south of the river, and up. Look way up. Here's the intro sign. 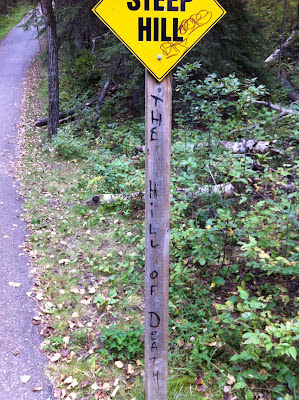 The sign is not kidding. You can see the hill heading up, and it gets steeper. I've no idea what the grade is, but I certainly would not attempt to ride even my hybrid bike up it. Or down it for that matter. The bedsteads are at the top of the hill, in an effort to prevent people from riding down all unknowing. That would be a very scary ride.

I wanted to see what runmeter thought of the hill, and you can see the sawtooth bit in the middle. I'd have thought it would be much higher. Maybe I need to spend a bit longer at the top and give the GPS time to register. I ran from just before the sign up to touch the bedstead, and walked back down. 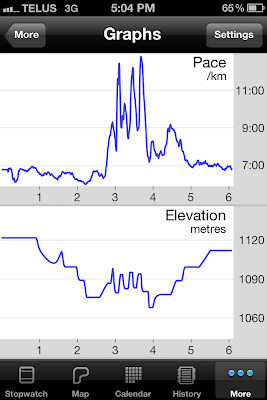 This is really the first time I've ever run hills. By the 4th time my legs were getting all trembly, and my breathing was distinctly an issue. I wasn't into the retaste zone, but I figured that another up would do it. I'll probably try that one again sometime. Here's the actual map. 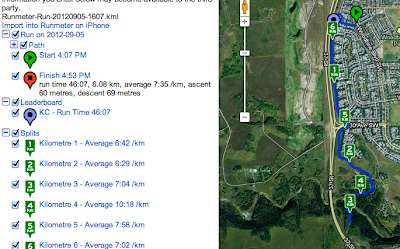 First yoga class of the season. Fiona still has it. She said it was a nice intro session to get us warmed up. Yeah. Sure. If you say so. She has a knack for knowing what I need. Something changed part way through class, though I'm not sure if it was a good change or not. At least it wasn't something internally loud. I should know in the morning.