Last night I really went to town with The Stick, rollering my IT band and quads. That was just a bit tender. This morning I decided to see where I was on bike fitness, and was completely prepared to hide my face in shame.

It wasn't so bad, though it was a very slow start. It took 10 minutes to get to 85 rpm, at a really low wattage. For the next 20 minutes I gradually went up through the gears, then did a bit of easy spin. My legs mostly felt pretty good, though my right quad and IT were feeling a bit grumpy.

Then I tried 175 watts for 10 minutes. Heart rate was mid 120's and breathing easy. Right leg still a bit grumpy but with some knee twinges thrown in for variety. Then easy pedal for 5.

Then between 200 and 205 for 5 minutes. Heart rate was mid 130's. I could feel the effort in my legs and was breathing harder, but could have gone on longer. Easy spin for 10 minutes to cool down a bit and try to get my legs used to moving a bit faster.

Then out for a 3 K run. Haven't run off the bike for a long time and had no idea how it would feel. My feet felt quite heavy at first, though not my legs. It was a pretty nice run on a beautiful day. My legs are happy. I wasn't thinking about pace at all, or breathing or anything. Just enjoying the run. The GPS behaved today. 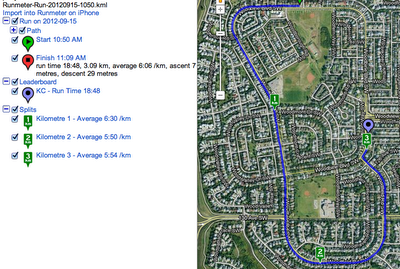 For the last little while I've been thinking about the recent release of the iPhone 5, and some of the media reaction. Much of it ranges from doom and gloom and Apple is failing, to Apple has lost the innovative edge, to I'm bored, to we got what we expected and it's a pretty darned good phone.

I got an iPhone 4 two years ago as a little reward for completing IMC. It was my first smart phone. Then, and now, I am FUCKING AMAZED by it. I remember getting a transistor radio for a present when I was a child, and I now find it difficult to express how small it was then, and how big it is now. It was portable in that a child could carry it from place to place. I'm pretty sure you could plug it in, and it took 4 D cell batteries. I'm just guessing at dimensions but it was probably a foot or more long, 8 inches high and 4 or 5 inches deep. For an AM/FM radio, no shortwave and certainly no CB. I suspect the speaker fidelity was laughable by today's standards. I don't have any idea how much it cost.

The early cell phones were portable in the same sense. They certainly didn't fit in a pocket, and cost an amazing amount of money. But now smartphones are common, and everybody knows much of what they'll do, and that "there's an app for that" for a great many other things.

Here's a short, off the top of my head list of what I use my phone for nearly every day, in no particular order: as a phone to talk to other people (duh), text message, email, link to social media, news reader, a camera and photo display with hundreds of photos, a video camera, a GPS run tracking tool, calculator, metric/imperial converter, appointment book, contacts list, errands and to do list, stores and plays days of music, map, finding a car2go, figuring out differences between 2 dates, Evernote!!!, remote for iTunes on home computer, watch viral videos, and much more on a more irregular basis, all by touching a glass screen. One of those uses is a video call, a la Dick Tracey. In a package that fits in a pocket and is easily held and used in one hand. It would almost fit as a wrist watch. With a battery that powers it for the better part of a day, more or less, depending on a number of things. 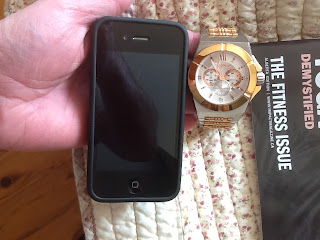 I know some of you are jaded now, but think about that list. You probably do many of those things on your phone and likely many others, depending on your interests and app collection. That list used to take a large number of different devices, some of which were quite expensive, and some of which didn't exist even a few years ago.

Take that phone back to oh, say, 1970, and you would blow the minds of every computer scientist in the world. Even telling them there is a tiny computer chip with transistors on it, doing all that stuff, they would have no idea how it was done. GPS, there is another rant right there. How many of you actually understand how GPS works? One of my buddies is working on his Ph.D in GPS stuff, and he says that maps and run tracking and stuff like that are the trivial uses for the technology.

Let's think about airplanes for a minute, rightly hailed as one of the greatest inventions and advances for humanity. Picture the Wright brothers the day after that 1903 flight, being taken to a top secret hanger, to look at a 747 somehow time traveled from 1970. While the size and materials used would no doubt astonish them, they would understand every salient feature of the aircraft with at most a few minutes thought.

Now back to the iPhone. Apple produces this amazing product. It changes our world. Then they make it better, and better, and now better again. Maybe I missed another better. But think of it, an amazing product that nobody knew they wanted, and they make it better. Each successive iteration they can barely keep them in stock. With all that some people are bored and disappointed.

I submit to you the problem is not the phone. The problem is the lame brain holding the phone. I feel no need to upgrade my phone because, holy crap, IT'S FUCKING AMAZING!!! I'm still learning new things I can make it do. There are new shortcuts I learn to make it work better. I find new ways of using it to make my life better probably every week on average. I'm pretty sure I'm nowhere near taking full advantage of it. My getting the iPhone 5 is a bit like me going and buying a Cervelo P5. (Sorry non-fitness junkies, you'll have to delve into the seamy world of bike porn to understand that.)

What do people expect? When they first released the iPhone the naysayers started by saying it couldn't possibly cost less than $1500 and couldn't possibly be that small, and why would anyone buy them anyways. Now the tech media builds unrealistic expectations, saying the next product "should have" x, y, and z, all of which are technically or commercially impossible right now. Or they complain that this amazing product doesn't do some particular thing they want and therefore it's junk or useless. A few rounds of this nothing that Apple or any other company supplies would make them happy.

You wait. The iPhone 6 or 7 will be 1 mm thick, have a holographic screen of any desired size while also fitting neatly into a pocket, able to take giga-pixel images if desired, and store millions of them, will come with every book every printed, every movie ever filmed, every song ever recorded by any artist, will have a biofeedback loop directly to our brains so we don't need to say "call Bill Smith", we just have to think it, will have more computing power than today's most powerful supercomputer, will never need to be recharged, will seamlessly link to any other computer network to share data 100's of times faster than today, and people will STILL be unhappy.

Why has Apple become the biggest and richest corporation in the history of the world? Simple. They sell products that people want to buy. Not have to buy. Want to buy. There's a difference. Products that are well built, and not only meet the needs of millions of people, but fulfill needs that they didn't even know they had. How cool is that?

Will they continue to do so? I hope so. If they don't, someone else will. Certainly Steve Jobs had a lot to do with where Apple is now, but some of the smartest people in the world are working there. They are sitting one one of the biggest pools of capital in the world. I suspect there are a few more things in the pipeline.

If you haven't seen it, the perfect finish to that rant is Louis C. K. and Everything's Amazing and nobodies happy.

To leave you feeling all warm and fuzzy, here's a cat pic. Taken, yes, on the iPhone, wirelessly transmitted through empty space, without me having to do a single thing, into my main computer, where it sits in a folder waiting for me to put it into this blog for your amusement. Just the technology of the blog is amazing, but that's another story. 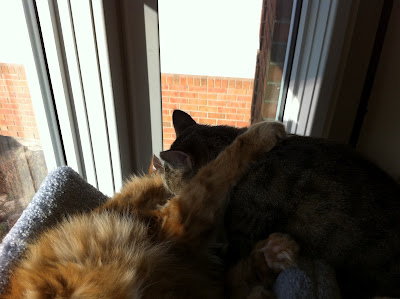