There is a high pressure system parked over Calgary for the last couple weeks, and will be here as far forward as the weather people are willing to predict. Scope this out. 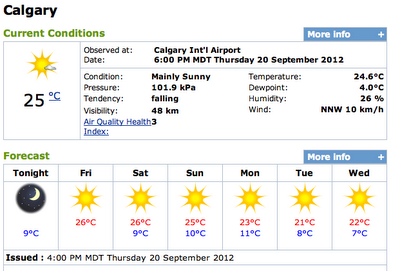 Calgary often has wonderful fall weather, clear sunny days that vary between cool to warm. Over 25 C qualifies as a hot day here, and doubly so in late September. Maybe I should take some vacation, take my bike off the trainer, and get out for some rides. At least I'm out running regularly.

Swam on Wed morning and was not feeling the water love. You sure do a lot of flip turns in the 25 m pool. Felt slow and clunky. Gave it up as a bad job and water ran with Katie instead.

Yoga. Holy smoking cow. I wore shorts and my lightest thinnest T shirt. I had a premonition. The woman that owns the studio teaches the class before us, and she likes it warm. Really warm. Verging on hot yoga warm, though she says she keeps the room so cold people have to put on a sweater during savasana. I think she's hallucinating from the heat. It was hot going into class so Fiona put the fan on, and that didn't help. She checked and it turned out the heat was still on, on a day that topped 25 C. No wonder we were cooking. The class is seriously discussing if we should tell her that we're going to start doing yoga naked if it's going to be that hot. I was sweating pretty good. During yoga. Sweating. Sheesh.

The class itself was excellent, as always. Lots of good stuff. I had something to drink after getting home and was out like a light.

I've wanted to try running home from downtown for a while, as my long slow run of the week. Now is good since it's warm, and Linda is on vacation so she can rescue me if needed. I walked to 2nd St and 17 and started easy. I was thinking of trying to average 7 minute Km pace, though I was a bit worried about the hills. There is a fair bit of up.

The big issue on the path was people taking up space and wandering erratically. One kind of cute Asian girl and her buddy were all over the path. Of course I caught up with them just as someone on a bike was coming in the other direction. There was a whole lot more confusion than there needed to be. Why is it that whenever you are overtaking someone slower, there is a third person suddenly involved? I'm passing a pair of people, running right on the centre line, when someone starts ringing their bike bell behind me.

It all worked out fairly well considering when I started I felt heavy and slow. It took a couple Km to get into the groove. I've done this route on my bike many times, and its even nicer running, as you have time to look at the river and the natural scenery. Much of the run is park, though two sections are on rich quiet rich residential rich streets that have rich renovations done to rich homes on a frequent basis. I chugged along, mentally writing my blog.

The big surprise was seeing Valeska near the Rocky View hospital, we stopped and chatted very briefly. She was just starting her run heading downtown. Downhill downtown. Then through a cloud of smoke where the patients and staff hang out. It never ceases to amaze me that hospital patients are allowed to smoke. To my way of thinking, smokers have no interest in being healthy. So if they have a condition that normally requires hospitalization, they should be forced to quit for the duration. Or the alternative is to put them in palliative care so they can die comfortably and with dignity. Or as much dignity as coughing up black shit out of your lungs allows you. Of course I wouldn't pay the nurses a bounty on "accidental' medication overdoses. Of course not! How could you think such a thing?

Going past Glenmore Landing I realized that I could make it home but it was going to seriously stress my legs. They were already starting to feel stupid and didn't want to pick up enough to get over cracks. I called Linda and met her at South Glenmore park. Turned out to be 11 K run, with a nice cool down walk, and then stretching when I got home. Running all the way home on the path will be about 17 K or so, which is just a little bit much for a long run right now.

I'm really pleased with my splits. The 6 K was up Sandy Beach hill, and that's just as tough running as riding. Just before the end of 8 K is where I ran into Valeska. There is a short steep downhill during 9 K that I walked and snarfed a Gu, and it took a bit of effort to get running again. K 10 I was almost back to pace but I was really feeling it. Plus I was starting to feel the heat. This is about as warm as I can run and control my reaction to the heat. Slowing down slightly and running in the shade I could cool down. Out in the sun I could gradually feel myself reacting to the heat, but it wasn't the outright mugging that I've had in the past, where once the heat attacks I'm done.

All in all a pretty good run that I'll have to try again. 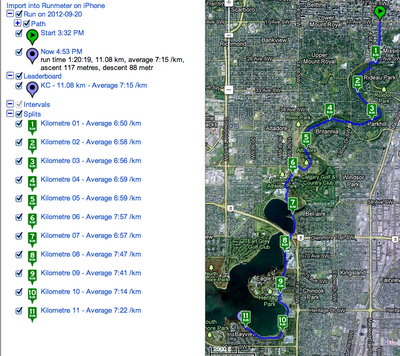 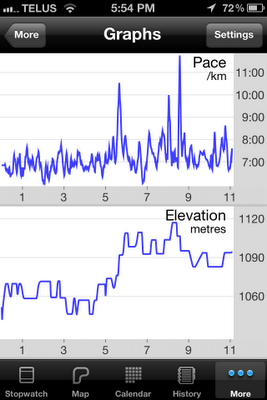