The Price of a Bargain, a rant

Here's my latest read. The price of a bargain, the quest for cheap and the death of globalization by Gordon Laird, a Calgary author. 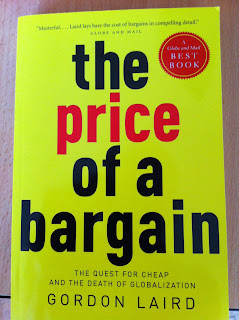 The problem comes when everybody expects everything to come at a bargain price, year after year. After a while people notice that things don't last very long anymore, and even if they could be repaired, it's cheaper to buy a new one. Then they notice companies take whatever actions that lower their prices, so as to maximize their profits. They get their supplies from cheaper places, or cut corners on materials. They go to where labour is the cheapest. They maximize their profit, and wherever possible they socialize their costs. Then people in North America wonder why it's harder to find a job that pays well, why local companies are going bankrupt, why companies walk away from their pension obligations, and walk away from the messes they have left behind.

Laird takes a winding path through this world. Our world. The world where Walmart and their ilk relentlessly drive down costs. Not just their own, but they demand that suppliers do so as well. I remember when Walmart started coming into communities. People protested, quite rightly foreseeing that it would destroy their local shops. Why? Because the people doing the protesting wouldn't support the local shops. They would prefer to go to the (previously protested) Walmart, and buy cheap shit from China because it was a dollar cheaper. Then their neighbour that ran that local store either saw which way the wind was blowing and closed up before they went bankrupt, or they went bankrupt.

Then other big box stores came to the community, or people drove to other communities to buy in them. The dollars started flowing out of their community, never to return. Then the community started dying, as the kids moved away because there was no schools, and never came back because there were no jobs. Oh sure, you could scrabble for minimum wage, if the Walmarts of the world deigned to pay you on time, but they couldn't live on that. So if they were smart they moved away to the big city to become an investment banker, and make the system oscillate even worse.

I'd say thanks Walmart, but if it wasn't them, it would be someone else doing the exact same thing. Laird points out in detail how the supply chain works, and it's an eye opening read. The cheapest possible materials, of unknown provenance, assembled by near-slave labour with little or no quality control, shipped across oceans by ships burning the cheapest crappiest bunker fuel, going through crowded ports, onto rail cars and trucks through an aging infrastructure to distribution centers, all in order for you to get that thing a nickel cheaper.

In all of that, quality is not a word that shows up much. It used to be that capitalism had two arms. One was to produce things cheaper, and the other produced higher quality for those that could or didn't mind paying a bit more. Guess which world we live in? It's a world where lead has become a more common commodity because it's cheap and malleable. Poisonous melamine is put in milk powder. Cadmium is in the paint on toys. Are you still liking that cheap junk?

It's a world that has driven relentless consumption of materials, oil in particular. We live in an oil culture. Most of our stuff is make up from oil products and byproducts. We burn it to transport our stuff around and stay warm in the winters, while we still have winters. We put it back into the ground as fertilizer to grow the crops we need to keep from starving. What's left over is put into tailings ponds that are so toxic they will kill anything, or are disposed of into the sky or water as pollutants that slowly build to toxic levels in the food chain.

Laird does a great job connecting the dots. If you haven't thought about how our world works, he has and has written about it clearly. It ought to horrify you, unless your world begins and ends with cheap shit and shopping as hobby. In some places it's a bit tough sledding, as there are no shortage of numbers involved. There are also real people involved, people who are sick and dying, people who can't find work anymore, people and communities that don't seem to have a place in this world anymore.

Just as most people are aware of the peak oil theories, Laird talks about a peak consumerism theory, that we've reached or surpassed it. Consumerism depended on finding cheaper materials, cheaper people, cheaper ways of transporting those goods, and people buying those goods. Those things don't exist anymore, and what's more, are likely to never exist again. Ever. Once the world changes it doesn't change back.

What's going to happen when costs start to increase? Nobody really knows. So many of our costs are subsidized in so many ways that nobody knows what anything actually costs, and it's almost impossible to tell what the results of changing the inputs are. One way of getting a clue is to look at the prices in the Canadian North for basic products. Very expensive, and transport is a major portion of the costs. Now think about the cost of those fruit and veg from Mexico, or Chile, or even further way, if the price of fuel keeps going up.

Already we know that a consumer economy based on debt isn't stable. More debt is not the solution. Neither is shipping money overseas. Laird doesn't really say this, but one of the reasons I'm confident there will not be a shooting war between China and America, is that for all intents and purposes, China already owns America. You don't burn down a house that you want to repossess.

Cultures that are not on a stable footing will die sooner or later. Jared Diamond and others talk about a number of cultures this has happened to. Western culture is no different. Eventually people will stop lending Americans more money to buy the cheap shit that China is producing, and the whole house of cards will come tumbling down even further and faster than it already has. At that point America, and to a lesser extent Canada, will get our shit together and build a rational economy, or I suspect we will starve or freeze to death.

Perhaps mercifully, Laird doesn't talk about what that world will really look like. He just points to some examples, some nooks and crannies of unglobalization in a globalized world. The last time our world went through a deglobalization phase, the result was the Dirty Thirties, and World War II. Let's hope that doesn't happen again.

The biggest disappointment in the book is that there isn't a chapter on what we can do about it. Though to be fair, that's probably another book itself. It's still a good read, well worth buying. I got it in paperback in Black Diamond of all places, but Indigo has it. Make the time to read it. Our book club is.

Over the past few years I've been doing my own protest about consumerism. I don't buy much stuff anymore, and only what I need because something has worn out or it doesn't work anymore. By modern standards our plasma TV is primitive, given that it's about 10 years old now. But it still works and as long as it does I won't be buying another. I don't care that I can get a bigger, brighter, LCD screen for a few hundred dollars. My wife has possibly the oldest functioning cell phone in Canada. I'm a few generations behind on phone and computer technology myself, and that's just fine.

We shop for our car carefully, take care of it, and drive it till the wheels fall off. One car, not two. Yes I still drive downtown, though I'm fully capable of biking it. But that wouldn't work as well for my wife. As long as both of us are working downtown, and I can claim parking as a business expense, it makes sense to drive. Calgary Transit is a horror show, even though our commute plays to it's "strengths". But if gas costs go up we may have to rethink that.

We are buying more of our food at the local farmer's markets. Yes, it's more expensive, but I can't think of a better place to spend money, to ensure that what we eat is good quality, and supports someone living and working locally. Or at least more locally than overseas.