This the first 4 day weekend for me in a very long time. Penn West has this great idea about giving people the Friday before long weekends during the summer off. As in the office is closed and our card keys don't work. Or so they tell us. We have next Friday off as well, for the Stampede Parade. The office is in fact open, because some people like to watch the parade from an air conditioned space. Not quite the same as being right at the side of the road with the hoi polloi, but still. So if you've been counting on your fingers, that means my next week will be a 3 day work week. I can't remember the last time that happened either. I will probably sleep in that day.

This whole weekend has been a quiet time, except for the fireworks on the reserve that one night. It's been good to relax and take it easy. Sunday I slept in. I sang Happy Birthday to Canada while making coffee. It delighted me when I read a news report about a twitter thread that was trending (I think that means lots of people are reading it) called #DenounceHarper, and even better that it was happening on Canada day. That along with #disruptacon made my day, and in fact, pushed me over the edge into creating a twitter account today.

Sunday was cloudy off and on, and I was feeling the workout from yesterday a bit. The major activity was cleaning wine bottles. Most of them if you rinse as soon as you pour, the bottle is clean. A bit of soaking for the label, sanitize when bottling and I'm good to go. However, the water spots build up, and sometimes there is a film or deposits. Then comes bleach time. About 5 dozen made the cut for cleaning. This is a soothing activity involving bleach, hot water, two 5 gallon pails, some laundry soap and a green scrubby for the outside. I like to put the cleanish ones in a bleach solution to soak. The really bad ones get straight bleach poured in, along with some tiny ball bearings. That gets shaken around and left to soak again. Repeat. There is something very satisfying about seeing crystal clear bottles that used to be filmy. Can't wait to put wine in them.

In between all that stuff I was doing some stretching and core on my mat. My low back and hips have been feeling creaky since the ride, and it was good to stretch things out. I was down in the basement for hours, working on the glass, puttering and tidying and stretching. When I came up there was some amazing cloud stuff happening near sunset. There was a huge cloud bank off to the east with near constant lightning in it. A bit later there was a neat cloud formation, and an interesting texture on the bottom. Here's a pic. 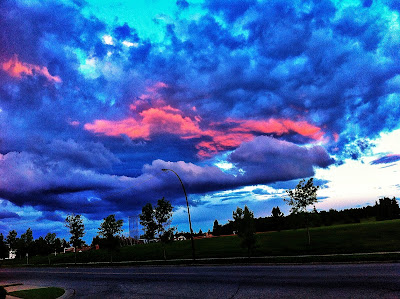 Monday was a lazy start to the day, what with signing up for Twitter, and getting started there. I had sort of thought of doing another brick, but I didn't. Instead I went for a run up to the reservoir and back. This was really nice! My legs were liking it. I kept the pace aerobic and my feet turning over pretty quickly. Coming back from the big steel power pole between South Glenmore and Weaselhead my legs felt a bit heavier, but kept going. Ran 75 minutes and felt great! It was nice to see a ton of people riding bikes on the path and lots of runners, even if that one guy looked like he was going to have a heart attack any moment.

Which leads me to a mini rant. Why oh why, is it legal for a big fat guy to be flopping his man boobs and gut all over the place without a shirt on, and some kill joy will call the cops if any woman tries it? I fully realize that almost every woman will choose to run with a sports bra just for the support, even without bringing "modesty" or personal safety into it. Honestly, that guy should have been wearing some support as well. But there are some women who are small enough up top that support isn't really an issue, yet that isn't a choice that society is mature enough to let them make for themselves.

Some would say it's just another example of the patriarchy exerting control over women. Repress them on the small things and then it's easier for the big things. In triathlon the rule seems to be that everybody has to wear a top. I guess they think that's what makes it fair. But look at the guys, most of them have the top unzipped as much as it will go, to the point where the top only covers their shoulder blades. Maybe someone on the rule committee has a fetish for male shoulder blades? I wonder what would happen of a woman unzipped to that point? I don't have to wonder. She'd probably be disqualified for breaking the nudity rules.

To finish up, because cats are almost as popular as boobs, Curtis and Celina. Curtis's eye infection has healed up wonderfully. He's been a total champ about the drops so far, but is beginning to squirm about it now. 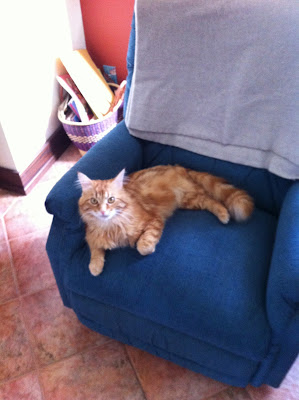 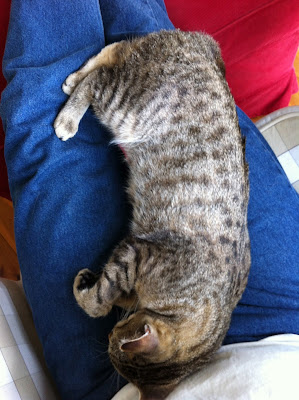