Faithful readers will remember I felt pretty good after my run yesterday. That lasted till I went to bed. It was one of those funny things where I was tired, and just as I was drifting off to sleep I'd get uncomfortable in whatever position I was in, and would have to shift. Which would wake me up again, and repeat the whole thing. Getting up and around in the morning was ok, till I had been in my office chair a few hours. Then for a few seconds my knees were unsure about this whole standing and walking thing, but it got better.

Today I was looking forward to a good stretching and core session. I listened to a couple of podcasts and was hard at it for about 40 minutes or so. Pushups. Plank, even. Mountain climbers. One thing that worked really well was the one where you lie on your back, knees in the air, hands behind head, then touch right elbow to left knee, then left elbow to right knee. This used to be really impossible, then it was hard, and today it was really good. Amazing.

Lots of other stuff, lots of low back stretching. All was good till the thread the needle yoga pose. If you're not familiar with it, you start on hands and knees. You slide one hand and arm along the floor under your other arm as far as it will go. It's a great stretch for your entire back. The right went about as I remembered it. I got part way with my left arm and stopped. Way early. I didn't remember it being painful like that. I gradually settled into it, and stayed there a while. Then did the other side and back to the left side again, feeling better.

I've somehow got away from doing the core stuff lately. For a while I was doing various knee exercises every day, and it was easy to work into some core stuff afterward. Then I sort of stopped, which wasn't the smartest thing in the world. Now I'll try to start again, and get a regular routine going again.

The Twitter thing is interesting, though there is some weirdness that I'm not sure I understand yet. I look at Twitter on the computer, the iPad, and the iPhone, and the experience is somewhat different on all of them. One place you can save a search, and others you can't. The following and followers counts don't always seem to be accurate. I'm still wondering which Twitter clients people use.

One thing about summer is fresh fruit from the farmer's markets. We love Kingsland and Calgary. I've never really been a big fan of apricots, till we had some fresh organic ones a couple weeks ago that were practically melt in your mouth. Then plums. Just now I finished off a huge bowl of strawberries. We got several bags of dates and I'm really loving working through those.

There is an interesting air downtown this morning. Not much traffic on the roads. Not many people on the sidewalk or in the office. Lots of people wandering around with that subtle look like they don't quite fit. A couple standing at the base of the Calgary tower arguing about which way was north. Buddy was on 9th Ave, thinking he was on the south side of the tower, and all they had to do was go along Centre for a few blocks and turn left to get where the Stampede will be. Not. A car started to turn right from 9th Ave onto Macleod Trail NORTH. Which would have been going the wrong way on a busy one way street. Good thing I was paying attention, but it's necessary here. Cowtown drivers barely tolerate cars on the road at the best of times, and have never quite become reconciled to the idea of pedestrians or (gasp) pedal bikes having some space on the roads.

The cats love their cat tree. I've discovered it's difficult to get good shots of them in or on it, with a bright window right behind it. Then I got the bright idea of taking the shot from outside, hoping to get some interesting reflections, and it worked out. Nothing done to this shot at all. 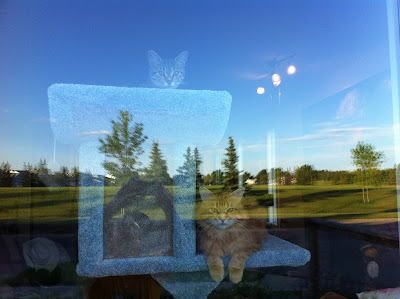 Somebody got the interesting idea of putting a painted piano on Stephen Avenue mall, near 2nd St. People are encouraged to play. I heard one guy when I was out for a walk at lunch last week. What is really neat is that it hasn't been vandalized. That's excellent! Now if only I remembered more of the piano lessons I didn't like as a kid. 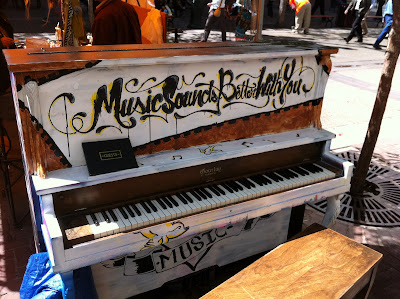