The rest of the weekend


We had a wonderful time Friday night at the Selkirk Grill. It was one of the 5 days a year in Calgary when it's nice to eat outside. Linda had a wild mushroom flatbread that I thought was pretty good, and she loved. I had the halibut stacked up on some veggies that was all very tasty. We split the fritters for dessert, since both the appies were big. And good.

From there we got our chairs and blankets and picked out a spot near the Moyie boat launch. I'm not into Heritage Park much so it was nice to wander around and look at stuff. We hung out and watched the sun go down. It wasn't a flaming colourful sunset, but it was peaceful and soothing, with gentle pastel highlights showing up a bit after this was taken. 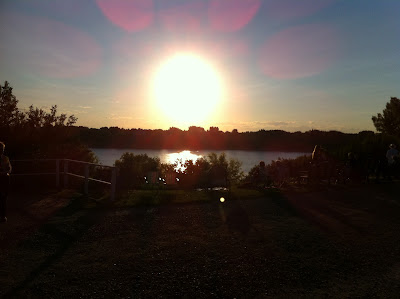 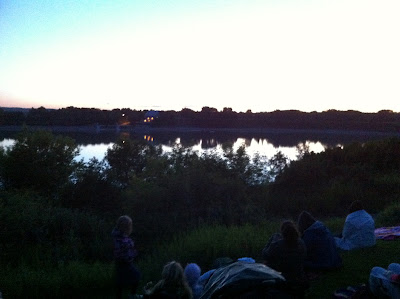 The bugs weren't too bad and the fireworks were really good. I think that the Global Fest fireworks are better, and you're closer, but we were not disappointed. Overall I wasn't terribly thrilled with my photos of the fireworks. The video is nicer but I haven't taken the time to play with it. Maybe later this week, sooner if my faithful readers ask nice. 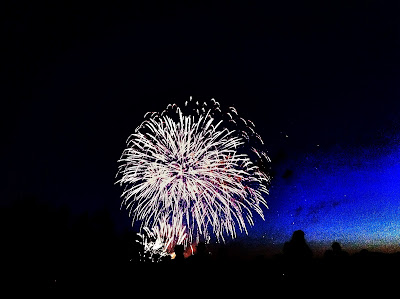 That was a late night for us, especially after the lung ripping, core searing, mad trampling rush back to the car. My low back and legs nearly froze up on me a few times as I was trying to keep up with Linda. But we were ahead of the crowd so getting out was easy, and then we're only a few minutes from home. Lots of people were coming out 90th Ave so I suspect they were watching from South Glenmore park.

Saturday was a sleep in, that's for sure. My back was better, but I knew there was to be no bike ride today. I came up with the closest thing I've done to an internet meme while cleaning up after drinking lots of coffee. Here's the photo: 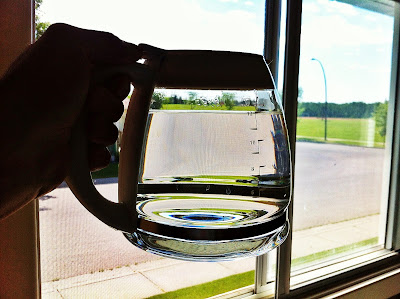 The caption is: The homeopathy crowd would call this a good strong pot of coffee.

It tickled my funny bone. Much of Saturday was taken up finishing the book, and writing my book review rant about bargains, and how they're not.

The most physical thing was sharpening our reel style lawn mower. It works much better now. Racked a wine kit to a carboy, and started the next kit. I love the yeasty winey smell the basement gets at this point. You can bet I was very careful how I was picking things up. Did some very gentle stretches in between reading and surfing this Twitter thing.

Sunday was a little more ambitious. My back was feeling even better, but still not quite right. I sprayed on some sun screen and went out for some weeding and lawn tidying. It felt really nice to be out in the heat, squatting, kneeling, bending over, and generally stretching out my back. It even felt good enough to go for an easy run around the block. Only a couple of mild muscle spasms, so this is progress. Really good stretching session in the basement afterward.

Linda had picked up a huge rack of lamb on Friday. She put on some marinade just after this was taken, and it sat there till Sunday evening. Then it turned into a delicious mouthwatering BBQ dinner. Now I'm full, and having an easy evening. I think I'm having a quiet Stampede this year. I'm only invited to one Stampede breakfast this year, and might go to the one at Talisman pool if I swim that day. No lunches booked so far, and no afternoon beer bashes. Which is probably a good thing. 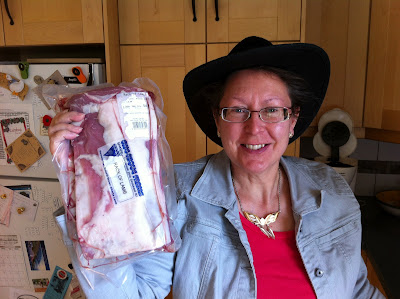 I was amused to discover that I now have many hats, including two cowboy hats. I'm not even sure how many in all. Perhaps I will dig them all out.