As many of you know, I'm pretty much a social recluse. I don't get out much. But there are exceptions. This weekend was one of them. After the struggles with XL on Friday, (a full blown rant, if you missed it) I deserved that glasses of wine when I got home. Later that evening a very strong wind blew a storm through, but we didn't get much rain here. 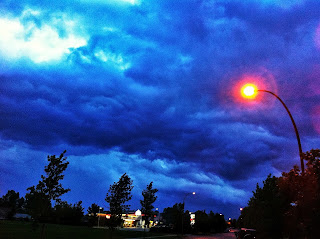 Saturday morning was nice, and we met some friends at OEB to start the day. Their food is so yummy! I'd link to their web page so you could drool at the menu, but then you'd just be in the line in front of us the next time we went. Can't have that. And no, the "Young Miss" as the waitress called her, is not drinking coffee with a straw. 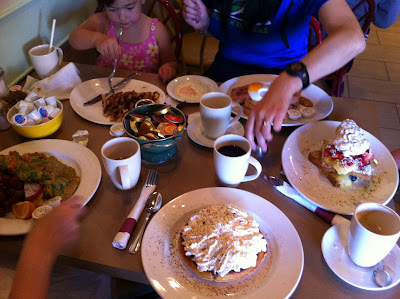 Then we checked out Car2Go. What a neat concept! Pick up a cute little Smart car anywhere in central Calgary. Drive where you want to go for a very reasonable fee, parking, insurance, gas all included. Leave it almost anywhere in that same central Calgary zone. I took a drive in one, and liked it a lot, though I'm not sure what it would be like on the highway. We are all signed up, and I can see times when it's going to be very handy. 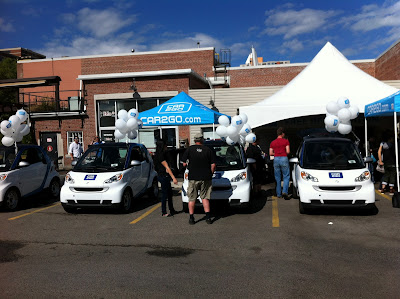 We cruised through MEC afterward, and I bought their last bike stand of a particular model. Now it will be easier to wash and tune my bike. We picked up tickets for the fireworks display next month, and are looking forward to attending that with some buddies. Getting in is tough, and getting out is a word that starts with cluster and rhythms with truck. But the fireworks are amazing, and there is a festival with all sorts of cultural booths from around the world. I ran into a buddy at the Farmer's Market, and we've made tentative plans to go for coffee and get caught up. So far the Farmer's Market has been a good place for running into people I know.

These next two are related. My buddy Sue put on a 100th birthday party at her house. The yard was just finished yesterday, though it looks very lived in. The cake is a very good representation of the front of her house, since that's what turned 100, not Sue. It was fun to visit her again, and meet some of her friends and neighbours. We chatted late into the night. Her friends are a well travelled bunch. 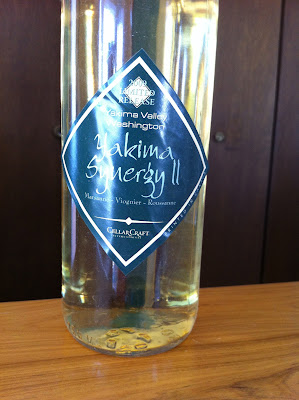 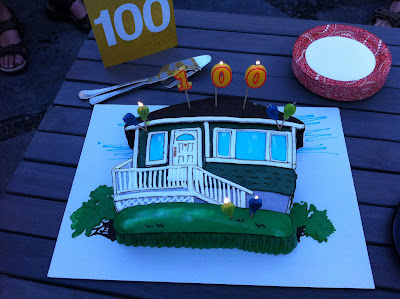 This morning our cats were tussling in the kitchen. There are actually two cats in this photo. Curtis blends in very well with the floor, and I've almost stepped on him once. 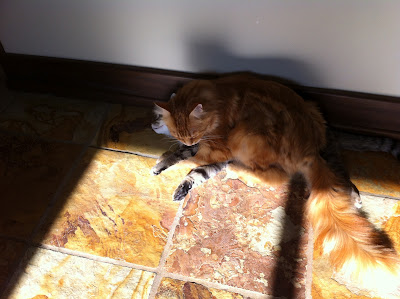 Then it was off to a book club meeting. Normally these are held in a pub, but we sat in the very nice back yard of my buddy L. We drank coffee and then we drank wine. We nibbled, lots. We talked a lot about the book, which is also a rant, and the state of the world. It was very nice.

Now we're home. I rollered and stretched. I think I will have a bruise on my hip from pressing on the ball, and at the moment it hurts to breath deeply, but I think it's another step to recovery. Even if I can barely walk at the moment. I am beginning to think that I may have done something more serious than overworking a muscle or two. Things should have relaxed by now if they were just a bit over worked. Doing the 70.3 is beginning to look more dubious, even if my acupuncturist works a miracle on Tuesday.