This is unexpectedly painful

Thursday I woke up with some low back muscles feeling more than just a bit cranky. I'd hoped the yoga stretching the night before had helped. I wore my cowboy boots to work which might have been a mistake, but maybe not. I walk differently in them, a bit more cautiously, so I was thinking it might be a good change for my back. The jury is out on that one.

It was such a nice day, though the forecast was for possible showers in the afternoon, so I thought I'd take my run gear to work and run at lunchtime. Even with cranky back muscles I still decided to do it. There have been many workouts that I start with some part of my body cranky at me, and then we all get our groove on and have a good workout.

The Bow River path is crowded at lunch, and I tried not to get grumpy about the walkers going down the middle of the very wide path. This is a path with walkers, joggers, runners, mega-runners, skateboards, roller-bladers, and all kinds of bikes from cruisers, mountain, cross, right up to a high end carbon fibre tri bike that was going much too fast. There's lots of consideration needed for the other users, and it's a good idea to check who is behind you before you change lanes, or worse, just stop. (Yeah, you geezer, I'm talking to YOU! Best be happy I had my eye on you.)

The run started, and stayed, clunky. My legs felt pretty good about it, and the pace was aerobic so my lungs were happy on a hot day. But there was zero stability in my core. Each step was a bit of an adventure as I could feel my whole body move if I stepped onto a raised or lowered bit.

However, I'm not so pleased with the rest of the afternoon. I didn't stretch afterward as much as I should, and sitting in an office chair the rest of the afternoon was just a killer. I was up and walking around a lot, trying to stay focussed on a complicated query for some data migration. Which is now ready for me to test next week, if any of you care about work stuff.

Even though I took my phone, I didn't take any photos. Somehow I didn't think of it. Pity. So you'll just have to make do with a Snapseeded photo of the cats below.

Linda rubbed my back with Tiger Balm, and I did some stretching when we got home. That helped. A Robaxisol helped me sleep. I'm still creaky this morning but better. So far the big task has been to sharpen our reel lawn mower. We've had it many years, and it's become increasingly less effective at cutting grass, and more effective at providing an aerobic workout. I finally got one of those sharpening kits and had a go. It's much better now. Some of you might think this means I should cut the rest of the lawn, besides what I did for a test, but you would be mistaken. That lawn wants to grow another day before being trimmed. I know this. 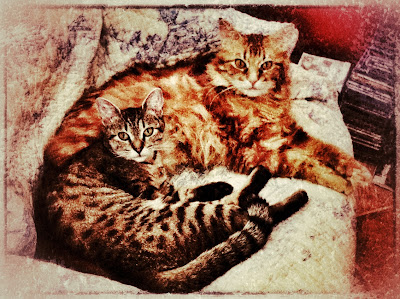 Email ThisBlogThis!Share to TwitterShare to FacebookShare to Pinterest
Labels: Snapseed