I spent the day at the Calgary 70.3 cheering my buddy Deb and anyone else that I knew. But she's not 82, and that wasn't her race number. Sister Madonna Buder turned 82 a little while ago. Today she finished a half ironman. There were a bunch of new course records set as it was a perfect day for racing. Janelle Morrison finished 9th which is pretty amazing considering her doctors thought she'd never do another triathlon after that car crash a couple years ago.

People look at the children setting World and Olympic records and are amazed at the peak of human performance. That's all very well, and I'm happy for them and their parents. But to me the amazing thing is that an 82 year old woman completed a half ironman. That's another kind of peak human performance, and one that is a whole lot more relevant to me. In a few weeks she takes on a full Ironman. Again. All the best to her.

Deb had been a bit nervous about making the cut off times, and in the end, there was no need to have worried at all. She started the run with a huge grin, and was running really well off the bike, then 4 K later, then again with 4 K to go. I guess she hit a tough patch between there and the finish line, but I'll let her talk about it in the blog she is going to write RSN. Huge congratulations to her first half Ironman! Here she is showing off her big shiny finisher medallion/belt buckle. 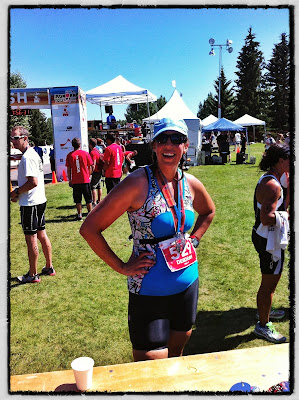 Along the way I chatted with BJ (Deb's husband), Carrie, Rose, Dan, Scott, Brian, Tessa, one of the volunteers that liked my blue cowbells, and I'm sorry if I've overlooked anyone. It was a beautiful day to hang out, wander around, nibble from the Steakout truck (it was really good), and best of all, the sunscreen worked and I didn't get burnt. Bailing out of the race was totally the right decision. Even the 6 or 7 K ride to North Glenmore and back on my hybrid bike had my back complaining a bit.

I was watching people today. Interacting badly with the volunteers and racers. I seriously think that some people didn't know a race was going on. They wandered through with a puzzled look, why are all these people and barricades here? After a while the volunteers just gave up policing the cross path just before T2, even though there was still bikes coming in. And volunteers, I love them dearly, and we can't hold the races without them, but why did one of them practically haul Janelle off her bike? She was coming to a complete halt right near the line. And that geezer on the path, I don't know what he was thinking, if he was thinking, wandering by totally oblivious. Neither BJ or I will ever know why a guy in black long pants, a long sleeved white shirt, with dress shoes, was pushing a bike that had a yellow ironing board lashed to it. I don't know if he was wearing a tie, but wouldn't have been surprised.

In other news, I was tagged the other day by The Blonde. I know her real name of course, but I like the air of mystery, which is augmented with the photos of her wearing sunglasses in exotic foreign locations. And this cool inspirational blogger award. 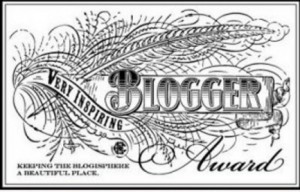 I've gone and read my fellow taggee blogs, and have enjoyed them enough to bookmark them so I can visit again.

So, 7 things about me. Which are not one of the 44 things I mentioned in an earlier tagging thing. Hmmm.


Now comes the hard part, finding 7 other bloggers to tag. Last time I picked the people off the top of my blogroll. There were complaints. So. You. You. You. You. You. You. And You, over there, hiding behind your husband. There, that was easy. What, you want links? Sheesh.

The Mama Runs: I've known her for quite a few years now, and was thrilled when she took up running. We've had a couple runs so far and will be doing more. I'm still working on getting her, and her husband into the pool. I will happily give lessons if we can work out a time. They are already on their bikes. She would be thrilled if you took out your wallet right now and signed the organ donor card. Us tall people have to stick together.

Deb Tris: I Like following blogs of people new to triathlon. It wasn't so long ago I was where Deb is. Then ran with her and SG one day, and had a blast. Us tall people have to stick together.

luckytiff: I think I started reading because she works shift work and mentioned it on in one blog. Which I once did, though I didn't blog about it then. So I commented. Then kept coming back. She just completed her first Half Ironman in Sylvan Lake a week ago. I don't know how tall she is.

Seriously??... Reeeally?... Seriously?: Some of you have clued in that I have an odd sense of humour. So does she. I can't describe it. You'll have to see for yourselves. I don't know how tall she is.

Shut Up and Run: Beth hardly needs the publicity, but I figure this gives her a chance to show the blogger love to a few of her many, MANY readers. Some of whom come to read my blog afterward, which pleases me ever so much. Thank you, feel free to leave comments guys. Beth is not a tall person.

Does this make my blog look fat?: Leauxra is another odd sense of humour, and you'll have to see for yourself. I don't know how tall she is.

Climbing those hills...: Another new triathlete. Even though I know a great many engineer jokes (I've worked with lots of them over the years) I would never tell one here. Right now. Unless you ask real nice. It's fun to watch people progress through old barriers. I don't think she is tall, but photos can be deceiving.

Just for fun, here's the view from the Southland LRT station Friday evening, looking south, and east. These are not dressed up in Snapseed. It really was pretty dramatic. 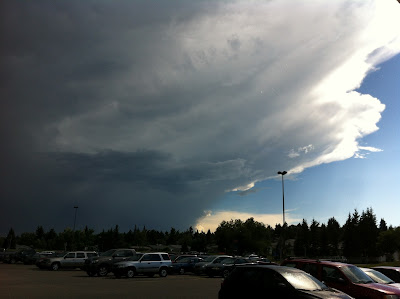 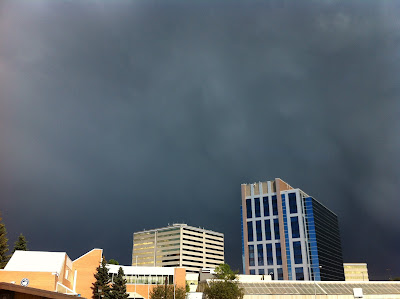