Wed was the first yoga class of the year. Our regular instructor is still recovering. I survived.

I don't even want to think about Thursday. Friday was better for several reasons. My family doctor looked at the non-icky medical imaging, and agreed that I didn't have a stress fracture. He seemed to be under the impression he had ordered the tests, and was a bit puzzled he couldn't find the notes. In any case, he also cleared me to run, carefully.

It was also good in part because of this. New computer toys are always good. So much better than the two small monitors. Now I can see all the Sharepoint admin pages, and get a reasonable amount of working real estate. 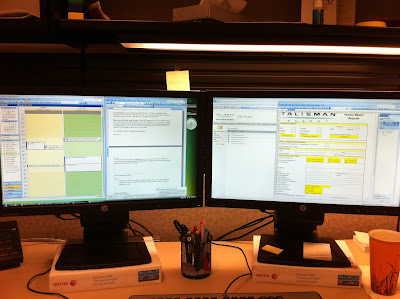 I didn't spin in the evening like I had planned. This was waiting for me when I got home. Plus wine. Can you blame me? (I don't know why the pic unrotated itself.) 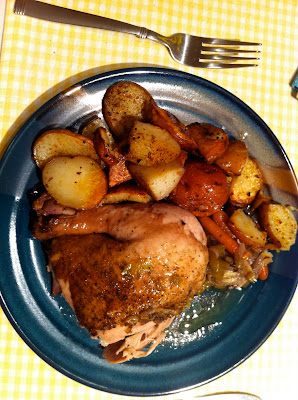 We ended up watching a movie made in 1949. Yes, more than 70 years ago. No, I wasn't around to watch it when it first came out, smartasses. One of the things I LOVE about the old movies is the short credits. I should have timed them more exactly, but the front credits can't be any longer than a minute, and the end credits are about 30 seconds. I don't care how big a movie buff you are, nobody cares who the caterer was.

The movie? Oh yes, Adam's Rib. It's showing its age, of course, but who can't enjoy watching Tracey and Hepburn do what they do best? Plus, all the hidden assumptions buried in the film. They had a servant. Their apartment is huge. The roads (in New York City) are essentially empty with the occasional huge car. People taking dictation. People dressing formally for a dinner party. And of course, the central driver of the movie, the roles of women in society. Men too, though they didn't realize that when they were making it.

Today was a busy day. Here's a quick summary. You'll to read from the bottom up. So sue me. Googles, tri shorts, Nuun, Parmesan Reggano cheese, pasta, salty chocolate tarts, buns, bread, rack of lamb, chick peas, kidney beans. You guess what came from where. 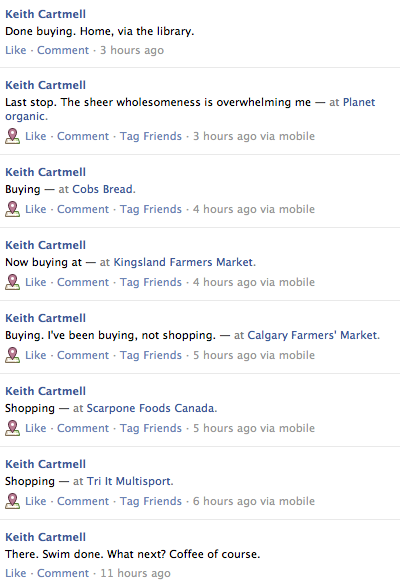 I was awake, so I headed off to Talisman and was in the water very shortly after 6. I was alone in the pool. Nice. Swam reasonably well for 750 m and then it fell apart. Kick, pull, drill, backstroke rounded out the swim part. Stretched really well doing water core and yoga. Hot tub, though it's not as nice as Renfrew. I'm going to have to ask why there is that blast of cold air blowing in from just above the door to the training pool.

Lots of the guys have tattoos, and I remembered last week I saw a guy with a huge parking meter tattooed onto his chest. I'm just not sure what that means. Surprisingly few M dots, though maybe I'm just swimming at the wrong times.

Zoomed around in a big circle, taking a slightly scenic route picking up various goodies. Waved to Kris and Sophia as I passed their house. I could swear I saw a sign for Illuminati Staffing at one point. I was amused watching someone try to deal with their car at the Kingsland Market. I didn't think he was going to get out of the parking lot. Back, forth, back, forth, frantically wrenching the steering wheel each time. Here's the route, done calmly and efficiently, except for the guy behind Tri It. (my fave triathlon store) who signaled left, and mostly turned left, before changing his mind and turning right to nearly hit me. Blue dots are where the stores are. 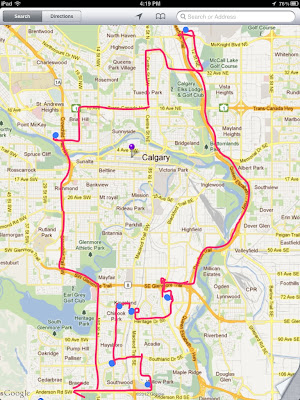 I was amused by a number of things today. Yum bakery at the Calgary Farmer's market is simply astonishing, but the line up is a bit of a gong show most of the time. Today, for instance. One girl had been peering in at the cabinet with her buddy. Believe me, the cabinet is well worth peering into! She picked out something for her buddy to get and said she'd wait in the aisle, and then stood up and turned around. We ended up nearly nose to nose. I hadn't realized she was that tall (wearing flat boots), and I don't think she was expecting anyone to be standing there, let alone anyone she couldn't loom over. We did that little side to side dance, then she was gone.

One guy at the pool was doing 25 m in 14 strokes and about 20 seconds. Could have watched him swim for a while.

As a guy, I'm liking the recent fashion of a shirt or sweater over leggings or yoga pants. It's a very good look for some women. But let's just say that a sweater short enough to show off leggings that are stretched enough to make it clear the undies are white and full cut, is not a good look. That's what mirrors or friends are for.

The south entrance to Kingsland is a bit of a hallway, with a left turn a few steps in. I've talked about this before, but what IS IT about doorways? Several people walked through the doorway in an acceptably purposeful fashion, then stopped without signaling their intent. I ended up wading through them.

Most people hold the door. Gender doesn't matter much. One pauses and holds the door for the next person, if they're only a few steps away. It makes me Grrrrrr when person one holds the door for person two, who slithers through quicker than a kid after a cookie or a boy's first time, letting the door close behind them. It's like they think the door has cooties. There I am number three, clutching at a door closing in my face. It's people like them what cause social unrest.

The roads and stores were actually much quieter than I expected. Maybe people are all shopped out.