The new pool is a bit more crowded these days, but still not bad compared to the old one. I'm still working to get used to the cold blast of air across the lane I like to swim in. Which lane is that? The one where I can see the time clock after pushing off the wall. That helps me keep on time.

This morning I wanted to play a game. Every lap had to be faster than a minute, preferably about 58 seconds. I'd keep going without looking at my watch until my lap times started going up. That turned out to be 1K in 19:15. Then some kick, some pull, some sprints. Then some relaxing stroke, trying to feel the water way out in front of me, working on the very first parts of the catch, trying to slice into the water as perfectly as possible, and pulling as smoothly as possible. This was totally NOT a strength thing, it's all feel, communing with the water, feeling my balance, working with my breath.

Which as a good precursor to yoga. Normally I pant in yoga, breathing from the top of my chest for most poses. Tonight I managed to relax in the Warrior 1 and 2 poses, and breath slowly and deeply. It makes the pose much better, more relaxing. I think I'm beginning to get the hang of this yoga stuff. About time.

One of the things about getting old is that the money keeps changing. You get used to something, and it changes. The other day I was digging some change out of my pocket and this really bright coin with lots of weird stuff on it showed up. Everything was sharp and clear on it so I think it was quite new. I'd never seen one like it before. It almost looks Egyptian. I actually took a picture of it. Back when they introduced the dollar coin, I thought they were nuts to put a loon on the front. Why would you do that when you could legitimately put a polar bear on it? If people would just take my advice life would be ever so much better. 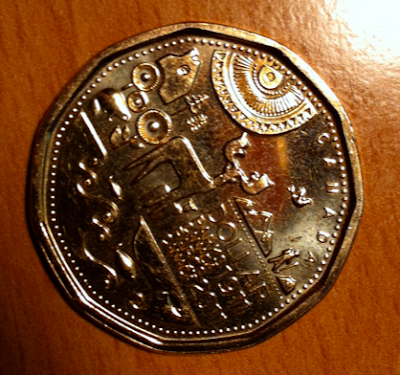 Turns out it's to "celebrate Parks Canada’s 100th anniversary. Features stylized land, air and aquatic fauna, varieties of flora, as well as a symbolic park building and the silhouette of a hiker framed by a snow-capped mountain range."