No workout stuff segued into a rant

The cold snap is almost over. I've been sleeping like a rock, barely able to get myself out of bed in the mornings.

Our friend Gail lent us a ton of books when we visited over Christmas, and Linda has been chewing through them. I've been chugging through this one. 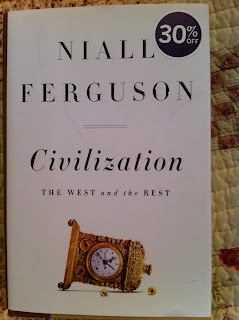 Overall I liked it, but he did go on and on at some points. I was getting a bit tired of it by the end. His idea is there are 6 reasons why the West dominated the rest of the world over the last 500 years:


One thing that he overlooks is climate. When all the days are the same, and you can always go pull fruit off a tree, or find something to eat by looking around, there isn't much incentive to save up for a rainy day. But when you live in a climate that has winter, you know that you have to make plans for that. Food, shelter, fuel for heat and cooking, a water supply, and warm clothing are just the start, and the consequences of a planning failure could be freezing or starving to death. When you don't know exactly when winter will come, there is incentive to get stuff done now. Today.

There is incentive to have a store of wealth to trade with other people if necessary. On a small community level makes sense to store like goods against theft, spoilage, or other loss, in a few central places, rather than in many little depots. Having a temporary excess also means methods of tracking who owns what, or is entitled to how much, which is the foundation of the banking system.

One thing that is interesting is how fast empires can fall. Depending on exactly what you measure, the Roman Empire collapsed in the west within a human lifetime. The British Empire went down the tubes in less than two decades after WWII. The Soviet Empire was only a few years from the pullout of Afghanistan to the collapse.

How quickly will the American Empire fall? Fairly quickly, I suspect. They are deeply in debt, their military is overstretched, their government has become venal and corrupt, to say nothing of incompetent and moribund. They've only lasted this long on the market's force of habit in treating them as a safe refuge. Eventually the world will figure out they are not just financially bankrupt, but morally bankrupt as well, and act accordingly. The President used to be called "Leader of the Free World" (yes with capital letters) but now he can't even lead his own country.

In fact, that word free is interesting. The USA can no longer be described as a free country. People have to show their ID papers to travel. Citizens are encouraged to spy on one another and report odd behaviour. The President can order anyone at all to be killed or tortured, for any reason or none. Anyone can be "disappeared"; held in prison indefinitely without trial, without having to state a reason, without access to a lawyer. The various agencies routinely spy on citizens and violate what little remains of their civil rights. Their property can be seized without effective recourse. The laws have become so complex that nobody knows what they mean, and people are coerced into pleading guilty because the alternative is to go bankrupt paying court and legal costs. The wealthy can buy all the justice and medical care they can afford. Everybody else goes to jail or goes bankrupt. You can't even escape medical debt through bankruptcy. The "justice" system is barbaric enough to execute people for imaginary crimes, especially the poor, the black, the mentally ill.

What civilized country in it's right mind would:

Eventually the USA will get what every other empire in the history of the world had coming to it. I'm torn on this issue, because I know many Americans and they are wonderful people. Many of the ones I don't know are wonderful people. It's a pity their country has been stolen from them and has become a vile place that is unworthy of respect in the modern world. I fear as their empire crumbles more and more, faster and faster, that Canada will be dragged down with them. I'm just not sure what we can do about it.

On a lighter note, more distraction arrived today. We think we watched all the episodes, and we think in the right order, but aren't sure. But we didn't watch the extras, no time. This ought to be good. I desperately want to know how much James Callis offered to reduce his salary when he found out it involved having Tricia Helfer draped all over him. 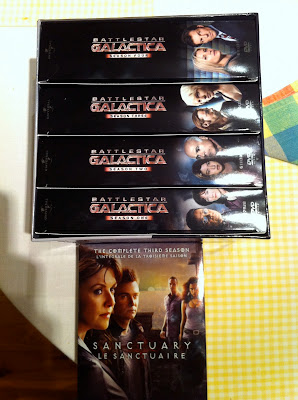