instead of going out for anniversary dinner

After such a busy day yesterday, I slept in till almost dawn today. The sunrise was nice so I had the phone capturing time lapse images, but it didn't turn out well, so I won't bore you with it.

Shortly after I ran easy 40 minutes, with a break every 10 minutes to walk briefly. My hip flexors were killing me. My feet were fine. It was windy enough to push me around, and make crossing some of the melting ice something to be done very cautiously. I did a good stretch before and after.

Part of the day was spent cleaning out and organizing my clothes drawers. There are still a few things around from my fat days, and somethings from before then. Here's a beautiful buffalo wool jacket I bought in Jasper in the very late 80's. I wore it a bunch of years and then I got too big for it. It's been in a storage box in the basement since the mid 90's I'd guess. It fits perfectly now. This pic is after coffee and before wine, so it's not me out of focus. Somehow, Linda's shots of me are often out of focus. No idea why. 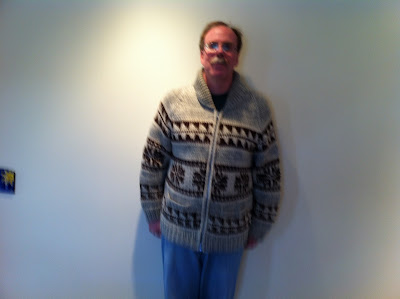 One of the consequences of losing weight is buying new clothes. Another consequence of wearing clothes is that they wear out. There are some T shirts I really really like that are no longer fit to be worn in public, unless it's to mow the lawn or other work. Mostly the neck has frayed away, though many of them have holes. Sigh.

There are two bright yellow (well, not so bright anymore) that I bought in Grande Prairie during a work trip mid-90's, and they're still in great shape even though I've worn them lots. The only problem is that they were a bit big then, and they are huge on me now. I created a pile of clothes to go to the Sally Ann.

One of the things we used to do to celebrate birthdays (not that I've had one for a while) and anniversaries was to go out to dinner at a nice place. When I wasn't working that was an obvious place to economize. Well, we've lost the habit. Linda can cook at least as well as the chefs in the fancy restaurants, and it's way cheaper for us to buy the nice cuts and organic veggies for ourselves, than to buy them cooked and subject to the vagaries of ill-paid wait staff. To say nothing about the effing exorbitant prices that restaurants charge for wine! Holy crap, it's supposed to be wine with dinner, not the other way around, but you'd never know from their prices.

Probably my favourite thing to barbecue is rack of lamb. I picked this up during my errands yesterday. It's huge. In that photo below, that's a regular dinner plate that the marinade container is sitting on. Not sure how much it weighed, but it cost $57. Free range, grass fed, no antibiotics, organic certified. We will get 4 meals out of it, so it's not that expensive really. (Oh, L and S, if you're reading this, 3 guesses what I'm bringing for lunch tomorrow.)

Linda tosses a bunch of goodies together for the marinade and we let it soak for a while. This is what it looked like just before going to the barbecue. 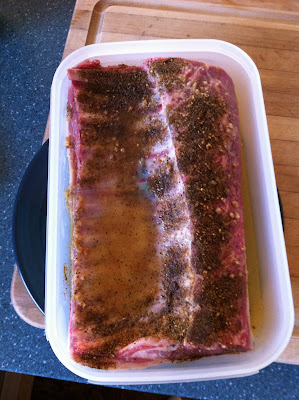 Some people have seen this already on Facebook. It smelled heavenly! It was nice drinking some wine outside while tending the barbecue, since the wind had died down and it was almost warm. We had it with rice and corn, fresh buns from Yum to mop up the juices with, and a salty caramel tart for desert. Wonderful. Better than what we'd get from anyplace in town. 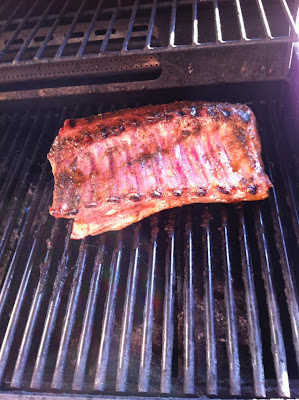 About the only other thing of note was taking down the Christmas tree and getting our living room back again. I think I'm getting soft in my old age. I used to be a capital B H, Bah Humbug kind of guy, but this year I enjoyed Christmas. One of the fun things was the evolving Christmas drawing on the whiteboard in the next office. If it's still there tomorrow I'll try to remember to take a photo of it, and that will be it for Christmas.