Where to begin? I was up early, no idea why, since I was up fairly late last night watching IM Kona. What a race! Seeing Raelert slowly gaining on McCormack, then the two of them run even for a while, then McCormack crushed him and pulled away in the last mile. Having Chrissie call in sick opened the field up for the women, and I can only imagine the fire it lit under the butts of the top female pros. Carfrae heard the bell and kicked ass, setting a new female run record for Kona, and finishing within a few minutes of the record that Chrissie set last year. Talk about a dream race to see them go head to head.

I watched the race last year, calling Julie regularly with the news since she was on the road. Now that I've done the distance, I have a whole new respect for what these people are doing. During the day it was more than 40 C out there. I soften just thinking about it, and am pretty sure I'd melt quick if I tried to run at that temperature.

It was nice to hear my last name near the beginning of the race. Fraser Cartmell was 5th out of the water and had a great day, ending up 29th overall. Any relationship is going to be distant, several times removed cousins at best.

Shortly after waking up I wandered outside to watch the sunrise. The different textures and shades of gray were fascinating. Unfortunately, the camera doesn't see them the same way human eyes do. This shot is the nicest of the bunch, though the photo doesn't show how much it looked like a log in a bed of coals. 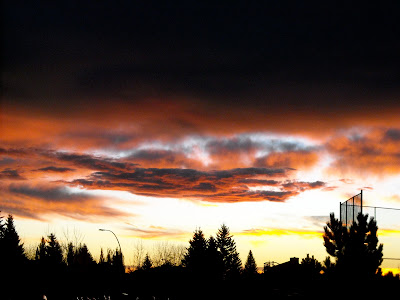 I'd been thinking about a bike ride, but it wasn't looking like that nice of a day. If it was a regular training day I'd have gone. But I'm still supposed to be taking it easy. Recovering. And I'm a bike wuss at the best of times. My legs are feeling a bit heavy this morning, and I remembered going a bit hard on the bike last time. So I decided to go for a nice run up 37th St. Did some stretching and loosening exercises, more than I normally do. Walked to the lights at Anderson, then ran easy 15 minutes.

All my running since IMC has been fairly easy, but I've been thinking about form and trying to run easily and efficiently. It's resulted in feeling lighter on my feet, and feeling faster. Today I wanted to push a little bit. Just a little. So at 15 minutes I leaned forward, and started driving my knees forward, and working my arms harder. My heels started coming up higher. My pace picked up, and although I don't think my cadence change, my stride sure got longer. It felt like I was flying!

I remember the last times running felt like that. It was back in high school during gym class. We'd gather in a group to listen to the teacher do the blahblahblah that nobody listened to. Then he's say Go! and we'd run out the door and around the track before getting on with whatever activity we were doing. Me and my buddy Barry were always at the head of the pack. I'd love to know how fast we were running then. It was only 5 or 600 m so it was fast.

This didn't last so long. I'd go a minute, then ease off for 4 minutes. Did that 4 times. Each time the fast run felt great! The next 15 minutes were at a steady pace, trying to run smoothly, imagining that my coach was watching with a video camera. Then I went off the bike path to run on the trails west of the path for the last 15 minutes and a bit, easing off at the end. Walked the 8 minutes home or so. More stretching after and some core. Feels good.

It's really weird with the quad. Running doesn't bother it. Feels good in fact. I can do deep squats, deep as in butt touching heels and back up again. I don't think I'd want to do a lot of them, but it works. Yet get on the bike, or do a fast walk, and that bit of quad starts complaining. It's number one on my massage therapist's hit list, and if that doesn't work, it's ART.

I've been thinking about a recent blog post by Josh Krabbe. He talks about training for Ironman, and being able to race it, as opposed to doing it as a stunt. (His word.) Normally I'd just leave a comment, but that's turned off. He and I think about it differently, and I think that difference comes from the difference in our ages and our physical condition. I don't know how old he is, but the IMC results give it as 18-24. I'm past 50. There is no way in the world I'm ever going to be able to race an Ironman, at least not what I think of as racing. To me, racing means you have a shot at winning. Distant, maybe, but a shot. By that standard there aren't more than a few dozen each of men and women who are racing an IM. Let's open it up a bit, and say a shot at winning your age group. If Josh agrees with that, then we're good to go.

He talks about many people training for IM within the year. I think he's underestimating the training involved. I strongly suspect that most people signing up have already done significant training, or have reason to believe they are in sufficiently good condition and may need to tune some skills. Even so, this is a very small pool of people. Yes, some people sign up and start training from an unfit base, and some of these people get through the race astonishingly quickly. And some of them blow up big time, even before the starting line.

But let's not forget the rules. There's the distance and the various cut off times in black and white. Can you do it? Or not?  I think it's entirely legitimate to use the "race" as an event to measure yourself. Some of us at the back of the pack might never be able to "race" even for the age group podium. We may lack the competitive fire in the belly. We may have physical issues limiting our performance. What's important to me (and you can claim self justification if you like) is that we go into the race honestly to measure ourselves against a standard. Can we do it? Or not?

It took me 3 years of steady training to be able to finish. I know for a fact that had I tried to do it after 2 years I would have failed. No question in my mind. Three years training, building to regular 15+ hours a week, and I got done comfortably before the cut off. That three years trimmed about 60 pounds off my frame, and took me from being a complete non-runner to someone who is now looking to break a 2 hr half marathon.

I didn't even consider racing it. I'm simply not in good enough condition. But my goal was to finish the race and not need a trip to the med tent. And to have fun. I paid my $ and had my day. Goals accomplished and I'm thrilled. Could I get in condition to race IM, race used in the terms of having a shot at winning my current age group? Lets see.

The winner in my age group at IMC went 9:28. Several pros went slower than that! Pardon me a moment while I take off my hat. Tenth is 10:32. Wow.

Mid pack (144th of 288) is 12:53. Now, I consider myself a sensible optimist. I could see myself setting a goal of going sub 13 and my coach not bitch slapping some sense into me. Not that I want to do another IM any time soon, mind you. That gets me to mid-pack. Is that racing? I suspect not. Is that a stunt? I don't know. Demonstrably, I can't do it now. What would a few more years of training do? I don't know and suspect going sub-13 would still take everything I have.

And that's the important thing. We're competing against ourselves here. Competing against our limits, mental or physical. Trying to go a bit faster against a remorseless clock. Trying to cope with the weather and everything else that happens during a long day. To the extent we put ourselves on the line we succeed. Everybody that crosses the finish line in under 17 hours, even if it's a last second sprint and puke and fall down and go directly to the med tent, is a winner in the race against themselves and the conditions of the day.