He shoes, he Cores! But the bike bribes the goal judge

I started this morning feeling pretty perky. Then, as I was backing out of the driveway to take Linda to work I discovered one of the tires had gone flat. Handling metal stuff at well below zero isn't my chosen way to start the day. My neighbour a couple of doors down was out for a cigarette and came over to help. He suggested a nearby auto shop he uses, and the experience turned out just fine.

A little later I laced on the shoes, and ended up have a great 30 minute core workout. Even the side plank. Last week I weenied out in about 5 seconds, but today went 45 seconds each side, 3 times. And it wasn't 45 seconds by the skin of my teeth either, each time it was a couple seconds over because I was sick of looking at the stopwatch. I like using my ipod as the watch during core, because it lies flat, and has big numbers. The fact that the thousands of a second sometimes seem to take forever is beside the point. The rest of the core went pretty good too, well, except the pushups. Started in plank, on my toes for the first one, and my arms collapsed part way down, so I did them from my knees. My shoulders are hurting a bit.

Very shortly after I hopped on my bike. Warmed up, did some cadence and one leg drills, then started on the main set feeling waaaayyyyyy better than last time. First part was ok. I was most of the way through the second set when my brain went AWOL. I sort of woke up, wondering how long I'd been doing this particular bit, wondering what was next, no clue what gear I was in, or what rpm I was supposed to be working at. My legs were getting tired. Looking at the plan didn't help. I skipped to the next set, starting in time trial minus a gear, then tt, then tt + a gear. I was supposed to hold 90 rpm. I was part way through the tt gear when I noticed I was pedaling like crap, doing the plunge thing at a much lower rpm than the plan. After spending a while trying to fix that, and noticing all sorts of funny twitches in my legs, I decided it was maybe better to call it a day than to try to force something that wasn't working. Did some cool down, and found I was getting cold and chilled from all the sweat. It's better than my last bike workouts, but still not back to normal. 1.25 hrs.

In other news, the sun is out! I took some shots before it melted the beautiful hoarfrost. This is from my back door. 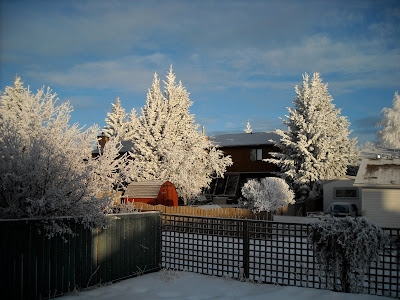 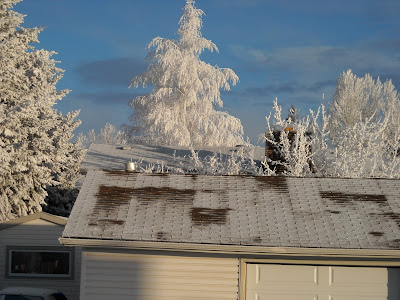 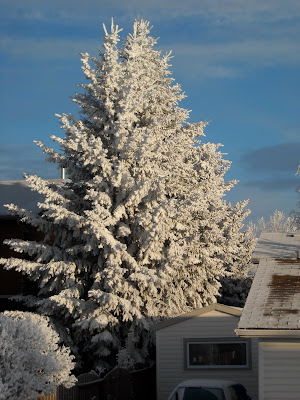 For dinner we've cracked the last bottle of Viognier. It's been 7 years in the bottle, and it's like drinking liquid gold. It is so good. This photo doesn't really do the colour justice. I'd like to get a shot of it in the sunlight, but I'm not about to go put it on the driveway. 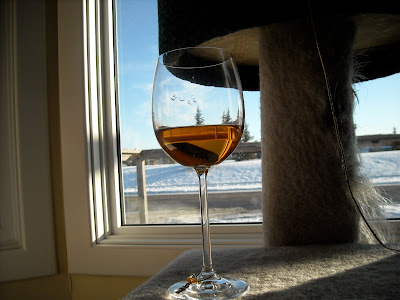