The book. Several of you noticed, and asked. See our blogger book club blog for details.

If you were going to swim, run, and do yoga, what order would you do them in? Given my druthers I'd probably do swim run yoga, or maybe run swim yoga. What did I actually do? Yoga, run, then swim. It has to do with when the yoga class is, when the pool is open, and how I'm feeling.

The story carries on from yesterday. My initial thinking was to run first thing in the morning. Pre-dawn, -14 C (7F) and slippery sidewalks. I had another good sleep, and after waking up to feed the demanding cat, I realized I could sleep more. Normally I can't. So I did, and slept past the time I'd have had to leave the house in order to return in time to leave for yoga. I figure my legs needed the rest.

That meant I had a relaxed morning to be at yoga for 9am. As always, Helen tried to kill us. She has this delusion that downward dog is a relaxing pose, and she's doing us a favour by letting us stay in it for a long time during the Sun Salute. There was a thread the needle pose that was really good for my shoulders.

After we got back I dressed for the run. It's much warmer and daylight now. The idea was to run 60 minutes, speeding up every 10 minutes. Which is another way of saying gradual build, which I still suck at, even at the best of times. My legs still suck at running today. Not as bad as Wed, but still. My easy warm up pace had my heart rate up to my normal easy run rate. The easy run pace, normally 130 to 133 bpm, was nearly 140. At least I could run at the easy run pace, but nothing much faster. Attempting that put my heart rate way up, and I could start to feel my legs getting tired. I called it at 30 minutes. Walked 10 minutes home. If they had felt like this during the normal course of things I might have pushed through. But with the last couple days feeling fatigued, I thought it better to back off.

From there I headed to the pool, and found the lobby full of little people. Children. Yuck! My first thought was that the pool couldn't possibly have enough bricks to provide sequential swim lessons for all these kids. That meant the life guards would have to reuse bricks, which would slow the whole production down. Well, since you asked, my way of teaching kids to swim is to tie a brick to each leg, and throw them in the dive tank. If they make it to the other side they get the medal for knowing how to swim. More advanced courses or older kids use more or bigger bricks. I digress.

When I found out they were going in, I went back home, and hung out for a while, then went back just as they were leaving. The pool was almost empty. I shared a lane with a nice lady for most of the swim. We raced at one point, my freestyle against her using fins and a kickboard. I could pass her on the turns, but she pulled ahead on the straightaway. 4x500m for me today. Freestyle, pull, paddles, and fins. Fun, way fun, ok fun, and tres fun, respectively. Fins were the quickest of course at 8:30, pull next at just under 9 minutes, freestyle just over 9 minutes, and paddles were nearly 10 minutes. I'm still figuring out paddles. All of this was done at a fairly consistent effort, not all out, not dogging it either. I was in the water just over an hour, and felt strong throughout. Then into the dive tank for 15 minutes of mobility, working on leg muscles. Hopefully my legs are just tired because they are building and strengthening and all that good stuff after the big runs last week. (Hush Amber, big runs by my standards. You're in a way different league.)

Even though tomorrow is a rest day, I'll probably hop on the bike and do some more easy spin. Blog buddies Cath and Jase are planning to drop in while they are in Calgary. The cookies are baked. Here is a before and after shot for you. Not quite what I had hoped for, so the experimentation will have to continue. 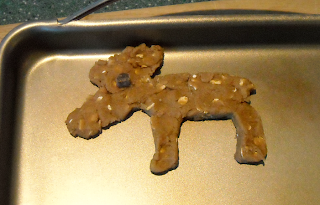 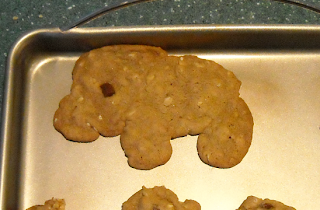