Good run in the ice fog

We've had a lot of ice fog in Calgary, which is very unusual. It's built up enough that it nearly blocks all of the chain link fence for the ball diamond across the road. Here's some photos for your amusement. 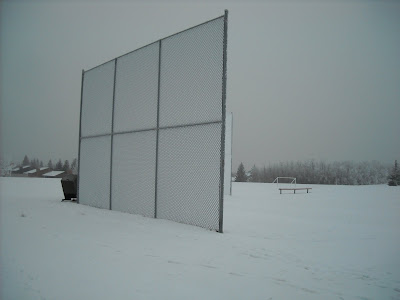 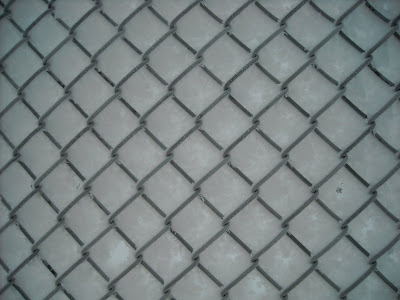 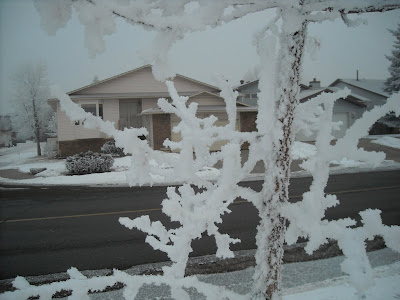 Last my faithful readers knew, my run and bike sucked. Sat I did not get on the bike. I ranted instead. Plus we had a perfectly wonderful visit from Cath, Jase, and their buddy Colin who is in the process of emigrating to Canada.

Sunday is normally get up early and go to spin class day. I hope Chris doesn't think I have something against him, because the days I'm missing happen to be his days. Sunday I slept in. I have a whole new appreciation for sleep now that I'm working out so much.

However, I did hop on the bike a bit for Sunday, but only half an hour. By the end of the warm up, my legs felt like they had been on the bike for a tough 2.5 hour workout. I went out for a run after, but that was only a half hour, struggling to maintain a half decent pace, and failing. It felt like my legs were sacks of dough at the end. Let's not even talk about core, shall we?

I'm not sure why the bike and run were so bad after last Monday. I don't feel particularly tired. I'm getting good sleep. My swims have been ok at the very worst, and the other two were pretty good. In fact, when I looked at my 500 m free time it was 9:10, and was having no difficulty with that pace. I should have kept going another 500 m and called that my time trial. Yet I wasn't trying to swim particularly hard. But the warm up effort for the bike and the run feels like I've been pushing hard. There is no strength or stamina, but nothing hurts, there's no sore muscles. Just really really tired. That's why my weekly totals are down.

Now today, Monday, started with an excellent swim. Lots of different intervals starting on a minute per 50 pace. My left shoulder was a bit stiff starting, but a nice warmup took care of that. No worries about lane till I was done the intervals, then a bunch of floaties moved in during the cool down. I felt very shark like cruising along, pulling nice and easy with the buoy, passing all of them. 1 hour.

It's still foggy here, and fairly cold and humid for Calgary. Dressed carefully and headed out for a 45 minute run. Warmed up nice and easy for 5 minutes and pushed a bit harder for the rest. My legs felt fine, for the first time in almost a week! Yay! I ran a steady low to mid zone 3 pace, feeling strong, knowing I could run faster at any moment, but kept it easy. Played with stride and posture a bit, and enjoyed being outside. Just about everything is covered with frost, and it really is quite pretty. Pity the sun isn't shining, as that would really light up all the diamond highlights from the frost.

Some of you that follow Steve in a Speedo might have noticed he is running a contest for the Gnarliest Injury photo. Don't bother entering. I sent in "those" photos. No Susi, I'm not posting them here again. Those that want to see what I'm talking about here, to see what they're going to have to top to win, can go back through my archive, to September 2008, and look for the blog with "graphic followup" in the title. Don't if you're the least squeamish.

Here's what Susi had to say about them.
"i didn't throw up...just held in an internal scream that would shatter the windows of every building downtown and impress the great alfred hitchcock. this was done while hastily trying to hit the wee 'X' in the top right corner of my computer. why do they have to make the 'X' so damn small in situations of emergency?!

i should add it's really hard to hit the wee 'X' in the top right corner when your eyes are closed. "
Here's what Steve said, "Holy Hannah!! "

Don't say I didn't warn you.