OK, this book scared the crap out of me

And it should frighten you too. Not just a big scare on one topic, but big scares on many topics. 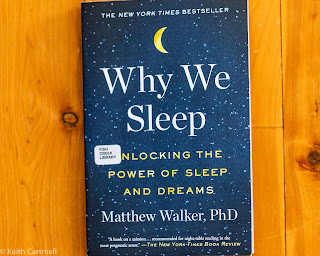 How much do you sleep? You're probably wrong unless you use one of those sleep apps to track it, and even then I'm not sure how accurate or useful they are. But just like drunks underestimate how impaired they are, sleep deprived people under estimate how sleep deprived they are, and how badly  it has impacted them. No, you are almost certainly not one of those people that doesn't need to sleep much.

One example, just to start. We all know, or should know, that driving while under the influence of alcohol is a criminally stupid idea. Studies have shown that people awake for 19 hours are as cognitively impaired as those who were at .08% blood alcohol volume, ie, legally impaired.

In some ways, driving when really short on sleep is worse than being alcoholically impaired. Why? Because when driving drunk, you react slowly. You are late in braking, late in evasive maneuvers, slow in understanding the situation in front of you, but at least your eyes are open.

When you are short of sleep, you will have micro sleeps of a few seconds at a time, when you do not react at all. You can't do anything about this. Your eyes are closed. How bad is that? At 50 KM/Hr, in 2 seconds you will travel 28 m. If an average car is 4.5 m long (15 feet), then you are travelling 6 car lengths in 2 seconds. Assume all is well as your tired brain starts a micro sleep. Lots can happen in 2 seconds. Someone changes lanes, or signals a left turn, or hits their brakes, or the road curves, or you tug the steering wheel slightly, or a hundred other things. You wake up and are transfixed with horror at the changes. Your brain reacts and thinks more slowly when tired, and especially when just waking up. You have to decide what to do, and then send the signals to your hands and feet, and you're likely to over-compensate. The whole thing becomes a physics demonstration that is likely to end badly for all involved. It does, many times every day. It's much worse at highway speeds, which explains the Deerfoot Trail some days.

In many ways we are at the mercy of the drivers around us. We depend on them to signal their intentions, follow the rules of the road, and react rationally to common roadway events. People that can't do this are a menace to us all.

But people short on sleep are a menace to themselves in many ways. The book goes into this in readable, but exquisite detail. Going short of sleep every once in a while is bad enough, but consistently doing so is measurably, demonstrably bad for your health. Most people in North America are running short on sleep, to the detriment of driving, working, and learning behaviours, as well has having a dramatic impact on your overall short and long term health.

Where to start? Sleep is crucial to learning. Study after study have demonstrated that a lack of REM sleep impairs memory and reduces learning. I know this from my own experiences. So what do we do to kids? We make them go to school early in the day. This cuts off REM sleep, which tends to happen more in the later part of a night's sleep. If school started later in the morning the kids would be more awake.

I'm amazed anyone becomes a doctor, what with the residency work requirements. It turns out the doctor who invented this regimen was a cocaine addict. At the end of a 24 hour work shift you are essentially functioning as if you've just had 2 stiff drinks. Is that really how you want your doctor to be working? It goes down hill quickly, then the poor sod has to drive home.

People who are sleep deprived are more likely to get the flu. Even more frightening, if you get the flu shot when tired (the study compared one group restricted to4 hours a night for 6 nights, to another that got 7 hours a night) you are half as likely to generate an immunization response. Half! There you are, all proud of yourself for getting the shot, and you are still likely to get the flu and pass it on to other people. The same is true for other vaccines.

Recent deplorable political developments, (Trump, Kenney) seem to prey on people's emotions, rather than present facts. One of the impacts of being short of sleep is that the part of your brain that regulates emotions shuts down. People short of sleep tend to over-react emotionally, and show violent mood swings. They 'just snap.' With good sleep, our prefrontal cortex is in charge, inhibiting emotional responses. Maybe we should be requiring people to get several good night's sleep before being allowed to vote.

Now think about cops. They work all kinds of weird hours, have the stress of dealing with all sorts of shit most of us can barely imagine let alone cope with, and they try not to think about how any random interaction with the public could go bad. They carry lethal weapons and are trained to use them. They are the last people we want thinking emotionally, or over-reacting to a situation. Yet the more sleep impaired they are, the more likely it is to happen.

The mental health people have long been aware that everyone with a mental health problem, including depression, anxiety, PTSD, schizophrenia, and bipolar disorder, have abnormal sleep patterns. The theory was that the disorder caused the sleep problem. Studies have shown that depriving people of sleep can induce behaviours very like those disorders, so they are coming to realize it's a two way street.

Just as tinnitus tells the brain there is sound where in fact there is none, a lack of sleep can drive a person into what should be a temporary problem, but then it feeds on itself, producing a negative spiral that can end up in drug addiction, homelessness, and other issues.

Sleep missed is like water down the drain. We can't 'make it up.' Get crappy sleep after a learning experience, and better sleep later doesn't revive that learning. It's gone.

Sleeping pills are the worst! They do not give you normal sleep. They sedate you, which is something else entirely. Then you get into a series of drugged states fighting in your brain. You take drugs to try to make you sleep, but then have to get up and function the next morning so you drink lots of coffee, which keeps you awake the next night, and so on. Meanwhile, you're never quite awake, and never quite asleep. To say this isn't good for you is an understatement.

My own experience with shift work illustrated the problems. I had some scares driving, and probably more than I remember. I had no appetite. I wasn't forming memories. My sleep sucked, when I could sleep at all. After only 5 or so years of shift work, I was a wreck. Linda was worried about getting that call from the police. It took me 6 months after getting off shift work to mostly settle into a regular pattern of feeling tired at night, and hungry at something approaching meal times during the day. Even now, nearly 30 years later, I still have trouble sleeping more than 6 hours at once, and often it isn't restful sleep. I make a point of taking afternoon naps when I can.

As you can tell, I got the book out of the library, but would probably buy it to refer to it again. It's interesting, informative, scary, and excellent reading. So put a hold on it or buy it, and in the meantime get more sleep!

How do you get more sleep? I knew most of these, but here's his list: 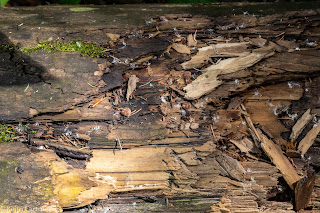