Merry Christmas to one and all!

I wasn't thinking about blogging today, but we have a brief interlude between our two bits of excitement today. Three if you count opening presents, and four if you count great Sumatran dark (DARK!) coffee.

The new Max Yellow Bus Rapid Transit route between our neighbourhood and downtown fired up a couple days ago. We wanted to ride to see where some of the stops were, and how long it takes to get downtown. Not that getting downtown to work is a thing, but we do have appointments there sometimes, and stuff along the way.

Here is Linda, giddy with excitement at the approaching bus. 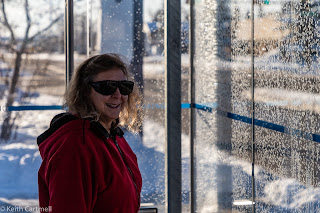 It was pretty quick, and there were half a dozen other riders, which was a bit of a surprise. Then again, there was essentially no traffic. I'm guessing that in regular traffic it would be about the same transit time as the LRT and the old 56 route or maybe a bit quicker, though I've a bit more of a walk at the end. The big advantage is not having to think about which LRT station to get off at to avoid seeing the bus zooming off in triumph.

The excitement later is dinner with friends and catching up on their family drama.

Speaking of drama, the AMA (Ask Me Anything) is now open. Limited time offer. Keep those cards and letters coming. I may well make up questions and attribute them as I see fit.

Deadwood of the Day
There was a black and white version of this published some time along the way. I think the tree is smiling at me. 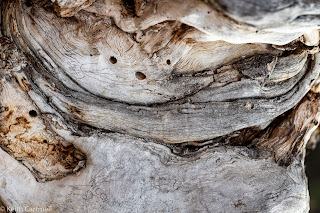