Oh Yukon, you stole my heart

Wow! I'm a word guy, and I'm having trouble here. As you might have gathered from previous blogs and other social media, I had a terrific experience in Yukon this last week. I'm still unpacking it, and Curtis is helping. I think he missed me.

In a someday sort of way, I've always wanted to see more of Canada's north. Before this, the furthest north I've been is High Level, AB (Vegas of the north) on a work trip. Lets just say there isn't much to see there.

When Neil offered a week long photo trip to Yukon I jumped on it. There was a proposed itinerary, but I knew from experience that it would probably change depending on weather and more particularly the aurora forecast. If the itinerary had been "get off the plane, do photo stuff with a side of eat and sleep, then get on the plane", I'd have been good to go.

I've seen the aurora a few times as faint green lights. Once in Clinton BC and another time someplace in Saskatchewan I've seen them so bright you could almost read by them, though why you'd want to look down instead of up is beyond me. A chance to photo them where they live was not to be turned down. Yes, I have photos and hopefully some time lapse. Stay tuned. I want to do them on the desktop.

What I didn't expect was Tombstone Territorial Park. This is where I'm having trouble with words. At times I was completely overcome with emotion and nearly in tears. It was that beautiful, and resonated that strongly with me. The light, the shapes of the landscapes, the colours, the silence. I didn't want to get back in the van. It isn't pretty like a flower, or scenic like Nova Scotia, or majestic like lots of British Columbia, or anything that most people would consider gorgeous. I've got lots of photos that I'll be sharing over the next little while, but keep in mind the difficulty is not finding something great in the camera view finder. The difficulty is framing it, when there is something equally great right beside it, and more beside that, and look over there, now turn around and OMG.

It isn't just Tombstone. We were driven from Whitehorse to Dawson City, and stopped lots of times along the way. Again, there were some landscapes that can only be described as stunning. I had a trial pano on the laptop, but it was 7.5 units wide for every unit tall, and I was shooting portrait. It was unworkable on the laptop, but I'll have another go on the desktop. I'll probably have to break it in two, unless someone out there wants a print, say 2 feet high and 15 feet wide.

From my perspective, I packed my stuff, got dropped off at the airport, was whisked to Whitehorse, the waiting driver took us to Sundog Retreat, food appeared, we were taken various places to photograph, more food, whisked back to Calgary where I was picked up again. All was seamless, and all was amazing.

Life isn't so simple. There is a LOT of detail behind this, so lets unpack a little. Neil Zeller arranged it all based on his frequent trips to the area, knowing who to contact. He knows what photographers want, and where to go to get it, subject to weather. He puts a lot of thought and planning into his workshops and these trips, and provides tremendous value. I've learned so much from him, and continue to do so.

Air North is part of the trip, and not just transportation. (Warm cookies!!) I know other airlines wouldn't let us tape material to the windows of the plane so our cameras wouldn't pick up light reflections from inside.

Sundog Retreat had a driver to take us to their fabulous retreat. This is the place to go if you want to get away from it all, and I do mean all, except the comforts of home. The cabins are clean, comfortable, well equipped, and almost all of them have a great view for the aurora. There are even luxury viewing cabins so you can see the aurora and stay warm. Linda is a comforts of home kind of girl, and she would be happy there.

The Yukon Wildlife Preserve is a great place to visit, and Lindsay gave us a special treat. (And you wondered how I got those Lynx photos!) Next time, there might be an even more special treat, but that's being worked on, so mum's the word. Just down the road is Bean North, a lovely little coffee shop. I brought a bag home and it's tasty indeed.

I want to go back to Dawson, and stay at the Aurora Inn again. The rooms were perfect for us, the food was wonderful, and the staff beyond helpful. A personal thing here. You know I'm tall. The shower is mounted well above head level. You have no idea how nice that is, when in some places I've stayed it's at chest height.

As an aside, all the food everywhere was wonderful. I didn't have a bad meal the entire time.

Klondike Exploration was awesome for us. Their drivers Alicia (Whitehorse to Dawson), Sandra (around Dawson and Bonanza Creek), and Tommy (Tombstone) were above and beyond in every way. They told us about stuff, pointed to places, had suggestions, and most importantly stopped when we asked them to. (Usually phrased as "STOP THE VAN!!!") We had so much fun, and they seemed to be enjoying themselves too. We strived to be not the typical tour group. (What happens on the road, stays on the road!)

My fellow roadies Katie, Judy, and Dalia helped make the trip fun. We got to know each other in a way you can only do when on the road. Several people told us that lots of people go to Yukon, and get it into their blood. Some never leave. Some go back to arrange their affairs, then settle into the Yukon life. I'm not sure I'm one of those. I know for a fact Linda would not live in a home without running water, but lots of people do and like it. (Did you know Dawson has a writer in residence? Unfortunately I'm not qualified to apply yet.)

Linda had to face the cat mini-horde alone while I was gone. It all seems to have worked out, though I'm not sure Celina even noticed I was gone, and doesn't seem to care that I've returned.

I am sure I'm going back. The question is when and for how long.

Here's just a couple of photos. I need to do some shuffling to get them on the main computer. 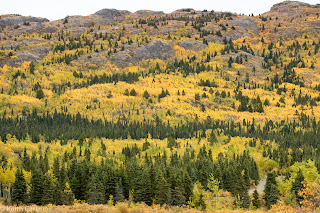 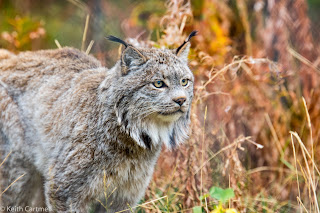