One of the difficulties in macro photography is understanding what you're looking at. Sometimes that's part of the charm.

This, for example. Most of you would have no idea what this is at 4.8x. 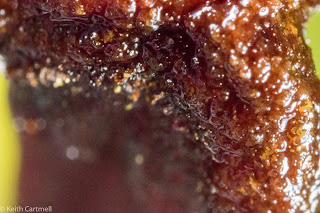 You're going to be a little better off at 3.2x. 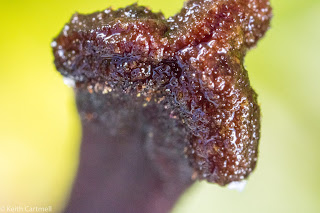 Still baffled? It's the central stamen thingie one of the black lilies out front, read about them here.

This is another case where if I didn't tell you what you were looking at, all you'd know is that you wouldn't want to fall in. It's at about 4x magnification, if that helps any. 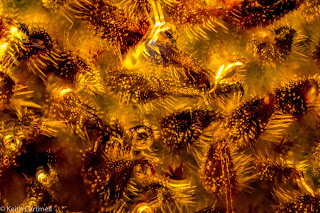 That happens to be my first attempt at focus stacking. The idea is since the depth of field is so shallow, you capture the image in slices, from the parts closest to the camera to furthest away. Then assemble the slices in Photoshop and you have a great image. At least that's the theory. Keep in mind that when you move the camera between slices you risk losing everything, since you only want to move it forward, about a mm at most. No other movement at all from the camera or subject, or else you start again.

This was mainly to test the process, to see if I could open Photoshop, and get something out without losing my mind. Mission accomplished there, even it didn't turn out quite like I'd hoped.

I suppose if I were a completist or something I'd show you all the layers, but no. All you get is the top one. If you remember the first image from last macro Monday, you've got a good idea what you're looking at. I'll have to try this again. Maybe something less complicated. 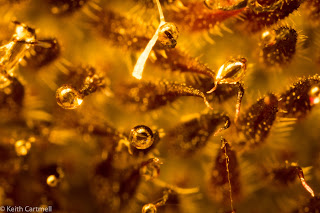