Fun, with a side of pitter-patter

How long has it been since you've seen someone you went to high school with? Until yesterday that answer was about 35 years for me. Gale is coming into town to visit a cousin and do a bunch of outdoor stuff here. Pity about the smoke. The first thing she did after the rental car was to meet up with me at OEB for breakfast. Tres yummy!

It was fun getting caught up on where we've been, and I took her for a bit of sightseeing around Calgary. Lots of changes, and some of those places I haven't been in a while.

As my diligent readers know, I'm off to Yukon tonight for a photo trip. I've already begun to start organizing the packing. First, though, was the business tax thing. Grrr. My taxes are simple, but it still stresses me out.

Then was the external hard drive. I've got just under 300 GB in camera chips for the trip, which ought to be good for about 11,000 photos. I'm there 7 days. Hmmmm. 1,600 photos a day. Hmmmmm. I will want to edit at least some of them, and I can't really do that while they're on the chip. The laptop has room for about 2,000 photos as they come from the camera chip, and I don't want to get into the game of taking some from a chip and not others.

That leads to an external drive. I have two, one is in active use now. I used to rotate them back and forth from the office as part of a back up strategy. Now that both drives live here that's not such a good idea anymore. That one drive has just sat for a while so I fired it up. Or tried too. Good thing I looked. I couldn't even erase or partition the drive with the tools on hand. There was a bit of heart pitter-patter as I was trouble-shooting.

In the end, the easy solution is a new drive. I'm a little nervous about the other one like it, but it should be ok till I get home. Then the time will come to figure out my needs going forward, and set up another system. I'm thinking a RAID drive might be good, but I'll see how the research turns out.

The moral of the story is not if your hard drive will fail, it's when. A bit of preparation and planning can save you a lot of stress.

The roses are still blooming! 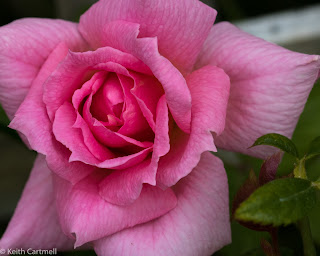 And Curtis is still snoozing. I'd like to think he's desolate about my going away, but probably not. More likely he's thinking deep cat thoughts, and I probably don't want to know. 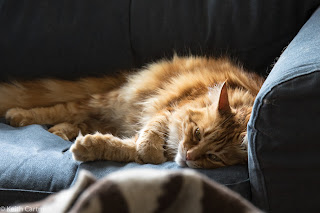