We have a civic election coming up in a few weeks. The candidates are out banging on doors and "literature" is being distributed. Just now I'm holding a glossy brochure for the incumbent in our ward.

Before you get any other message, absorb this. Go vote! There are many ways to do so. No matter how busy you are, there is something that will fit into your schedule. Just go do it!

I was asked how I decide who to vote for. As you might suspect, I have a process. First, I look at the incumbent. The question I ask is, are they doing a stellar job, or do they meet the diaper rule? I think Twain said it, that politicians and diapers should be changed often, and for the same reason. I'm a big fan of the diaper rule.

The incumbent is usually not doing a stellar job, though there have been exceptions. Next I eliminate all the white men and see what I have left. Yes, this is discriminatory and racist, but there are two reasons. One, these people have been running things since forever with results that can best be described as mixed. It's time for other people to have a chance. Second, and best of all from my perspective, it usually cuts the herd down to an easily considered size.

Time for a little digression about the neighbourhood I live in. I am sad to say my neighbours are deeply conservative, in both the small c and capital C senses. Federally, Prime Minister Harper represented this riding, mainly because it's one of the safest conservative seats in the country. Before him, it was Preston Manning, for much the same reason. Before that, and I'm reaching here, it was Bobbie Sparrow, who I'm pretty sure came from old money and was regarded as a safe vote, or at least that's the impression I got the one time I met her.

Provincially, Dave Rodney has been our MLA since forever. A complete non-entity, he tries to give a good appearance and do what he's told. Even in the diminished circumstances of the party, he hasn't been tapped for a leadership role of any kind, which tells it's own tale. Even in the NDP tidal wave during the last provincial election, he got re-elected. Sigh. Diaper rule, big time.

So here, with typically strong incumbents, (and in the current civic election our incumbent is the second most senior council member, having served since 2000) we don't get much in the way of people running against them. Pity, but I can't blame them. It's a safe bet to lose the election, and almost certainly lose your deposit.

Usually the hopefuls are other men, with a few women, and almost all of them are of the white persuasion. This area was not what you'd call ethnically diverse, though the new neighbourhoods south of Fish Creek have changed that somewhat. About time.

After considering the incumbent, my process is to look carefully at the the candidates that are not white men, if any. Not being part of the old boys club, or "one of us" as Humphrey Appleby put it, is a plus in my books.  It doesn't matter if they were born here or not. I'm a big fan of immigrants. I've worked with lots of them, and many have a hustle that has to be seen to be believed. Related higher education, or experience in other government, or in the local community association, or in some form of business is desirable, but not essential. With any luck the process stops here.

If I must, I consider what's left. I sigh deeply, and try to pick the least dangerous one. Any candidate trying to push my buttons on law and order is an instant turn off. A similar result happens to those who harp upon lowering taxes preferably to zero or further if possible, and at the senior levels of government actively try to game the system to lower taxes for them and their buddies. I believe that taxes are the price of a civilized society, and that the free market will not solve all problems better than government.

A quick example. Take the fire department. In no world does it make sense for a private firm to provide the services done by the current fire department. They would skimp on equipment and training, and I could just see someone checking the address before responding to an emergency call to make sure they'd paid their service premiums. I wouldn't put it beyond some predatory capitalists to set fires to create business. Oh no, not directly of course. They would incentivize the the process, and outsource it. There are numerous other examples.

Yes, it makes sense to keep an eye on government spending and try to make sure it lines up with the priorities that make for a better community. Keep in mind that it's bedrock economics that government spending should be somewhat counter-cyclical. That means in good times government should lower spending to pay down any accumulated debt, and in bad times increase spending via deficit financing if necessary to help stimulate the economy. The City cannot run a deficit, though of course it uses debt to finance infrastructure. Just about the only thing more expensive than building new infrastructure, is coping with the failures of infrastructure through lack of maintenance, or not building it in the first place.

There are any number of other boondoggles spouted by politicians to get your vote. I've mentioned a couple of them, lowering taxes and law and order. Another is cutting "the fat", usually taken to mean cutting union positions. The fact that union people usually happen to provide front line services doesn't mean anything to them, since them and their buddies don't work those jobs. They talk of looking for efficiencies, and are willing to hire expensive consultants (who just happen to be their buddy) to find them. They might be a one issue candidate, or closely related, be a complete loon in general. They prey on the fear of the outsider, people that are different than those in that electoral area. Often that means immigrants, or people of a different religion, or the LBGTQ community, but they'll demonize anyone to get a vote. Maybe it's appeals to the good old days, or bringing back good jobs.

Ask yourself if a candidate is creating division between people, or trying to build communities? Are they trying to prey on your fears? Do they gloss over specifics and get upset when you ask them questions? Look how they talk to minorities, women, immigrants, the homeless, or anyone they perceive to be of lesser status. Individually they are probably charming charismatic people, but look past the gloss. Look at who supports them, and think hard about their dog-whistling statements. How do they treat the other people running for that office? Are they treated as respected competitors to be vigorously debated, or as opponents to be destroyed?

We need look no further than the recent American presidential election. Many people are looking on Donald Trump with horror. I'm appalled that he got elected, and don't want to see anyone even remotely like him elected here. Only a fraction of American voters lost their minds enough to vote for him, but the damage was done by the majority that did not vote. I'd like to believe that if almost all voters had voted, he'd have lost in a landslide. Then again, Hilary's emails, and misogyny in general.

I believe that the more people vote, the more sensible the results are going to be. To many politicians now use wedge tactics that divide voters, and try to push out the moderate middle, and seek to inflame a minority that's just big enough to give them power. We have to resist such tactics, so get out there and vote!

And now to sooth you down after such a rabble-rousing blog (you have voted, right?) here's a butterfly and a sunset scene. 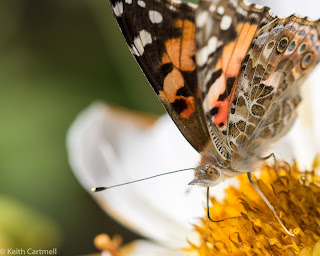 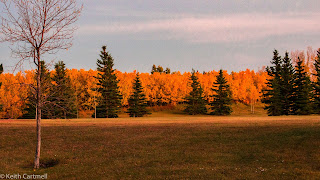