Lets not talk about this week after saying the words shitty sleep. I got through it, though.

Today was fun. It's ride your bike to work day, and it's civilized weather outside. Really nice, actually. I met up with BRBE and we took a pretty direct route downtown, riding mostly nice and easy.

The first for me is actually riding on the 5th St cycle track. I was rider 99 this morning, at about 6:45. Michelle, of course, was 100. Lots of other people were on their bikes. As planned I saw my boss, and my buddy Sophia. I picked up a bunch of swag but haven't sorted it out yet. Entered some contests. 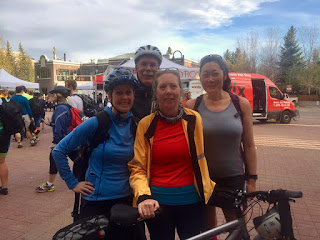 Technically, I've broken a nearly 40 year old streak today. The last time I ate McDonalds food was in 1980, before coming to Calgary. The coffee trailer at the bike thingie was McDonalds. I didn't care, I had one. It actually wasn't bad.

Yes, I was into work for an hour or so, just to get some fresh eyeballs on a complicated spreadsheet, and just as well too. Nothing major, but I'm glad I wasn't trying to do it in a rush at the end of the day yesterday. Let's not talk about that either.

I came home pretty much the same way we went. Round trip is 40K almost exactly, in 2:25, with some stops along the way. I'd sort of thought of taking the scenic route home down the Bow path and across Fish Creek, but I'm glad I didn't. I was pretty tired getting home, and I'd have probably pooped out along the way.

The reservoir near the dam was almost completely calm, and some interesting clouds. Of course I stopped. 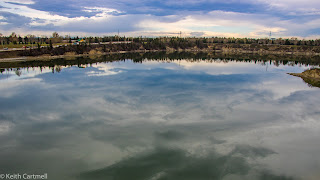 Email ThisBlogThis!Share to TwitterShare to FacebookShare to Pinterest
Labels: Reflection