For a guy who's every weekend is 4 days, they sure disappear in a hurry. I missed the Saturday blog and didn't even notice till this morning. Something about up, lots of Celina photos (scroll down), coffee on the patio, staining part of the fence and gate, lunch, washing windows in the house and lodge, and working on a People gallery in my photo blog (stay tuned), do some photos, BBQ chicken for supper, sipping wine on the patio and enjoying a perfect evening, do more photos, and suddenly it was bedtime. Zoom.

Friday was a zoom too. Swim, breakfast at Galaxy Diner, buy the extension tubes, dodge traffic/construction and a bazillion kids in town for the children's something or other, hit 3 shops at Crossroads Market, hit two shops at Calgary Market (where the oranges were IMMENSE! I'm talking big enough that I double checked to make sure they weren't grapefruit), some pet stuff, play with the extension tubes, edit photos, blah blah blah. Zoom!

Today? Meet up with Katie at Repsol to hear about her adventures. I did 1 K 18:55, trying to swim cautiously. My back and shoulders have been giving me hell lately, to the point deep breathing is painful. I'm thinking that the flip turns were part of the issue so I tried a different style. That was a bit floppy since I don't quite have the core strength.

Then a 10 K run with BRBE, listening to the distant sounds of the Calgary Marathon announcers as we ran through 4 count'em 4 cemeteries. Union, Chinese, St Mary's, and Burnsland. It would have been 5 but the Jewish one was locked. Given the vandalism they've had, who can blame them?

Which leads me on a bit of a side rant. We ran past thousands of graves today. We read some of the names, and on the tougher uphill bits when we were walking, could read the dates. I don't have the first idea what religion they were, though some variation of Christianity is a safe bet for many of them. I didn't have the least desire to deface or destroy any of the headstones. I don't understand how anyone can be so threatened by a headstone that they have to destroy or vandalize it, even as a proxy for attacking a faith.

We had a lovely run. The cemeteries are beautiful, quiet, peaceful, and well maintained. Some of the headstones could be classed as art. But it's sort of an odd thing, to see all these headstones representing people, and most of us have no idea who they are. Presumably their families still know, but after a while people pass out of living memory, and all we know is what's written in history books about them. There's a place for famous or infamous people, but the vast majority of us will be part of the great unknown herd. Even if they have a prominent headstone, posterity still won't know who they are.

I'd rather be known to the people around me for what I'm doing here and now, doing what I enjoy doing. Posterity can think what it likes of me. Enough of the serious topics.

Celina! This is a weird photo. I had one of the extension tubes on the 100 mm lens. Celina was up in the kitchen window, where she knows perfectly well she doesn't belong, meowing her heart out. I was trying to take a photo, and was wondering why it wasn't working, getting close and closer. Duh. Another lesson. If the extension tubes are on the camera, you're doing macro work. End of story. 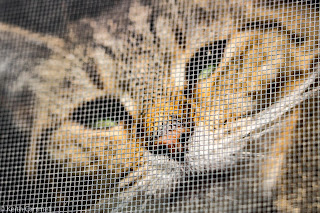 Saturday morning she was lying in the sun, writhing around. I was lucky enough to get the camera. 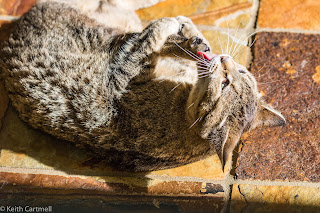 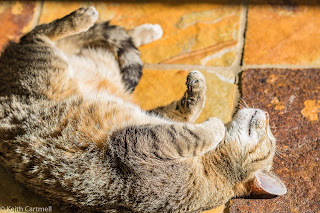 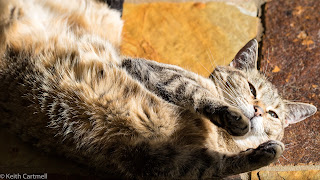 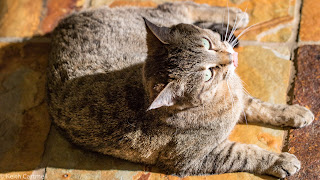 I've been capturing an Allium out front, from the splitting of the bud, to final bloom. The original idea was to publish the photos as they were taken, but I think instead I'll gather them all up and do one blog with them. Maybe this will become part of my keywording. Last fall and winter was the 2buds. This might be the summer of the Allium. (There will be no Day of the Triffids, unless one lands here.) Who knows what the fall will bring?