I shot Bambi in Fish Creek!

With the camera. Sheesh guys, what were you thinking? 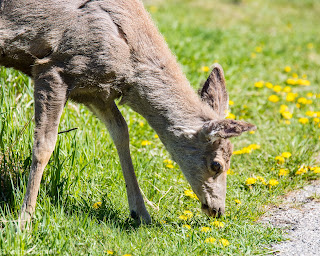 I was out for a lovely ride on Estela down in Fish Creek park. She's really too much bike for the bike paths, but I wanted to get her off the trainer and out in the fresh air. She's a happy bike now. Well, except for the sticky chain that needs to be cleaned. We won't get into the text conversation about that.

Just near bridge one I startled Bambi grazing about 10 feet off the path. By the time I got the camera out of the bag and turned on the distance had grown a bit, but that's why they make zoom lenses.

The ride took me only as far as bridge 4, and some time along the top of the ridge. The park is green everywhere, and the river is running high and fast. Here's a few more photos for you to get your green fix. Yes, Terry, I waved in the general direction of your house during the ride. 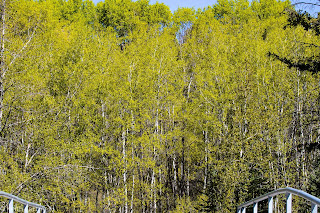 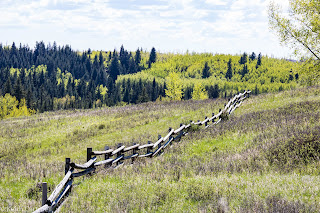 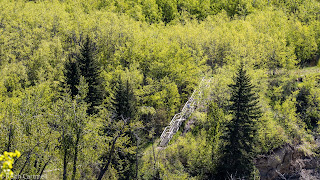 That last one might be a nice place for runners to do stairs. Not like the insane stairs at the curling club, or Winter Club, or North Glenmore park.

The ride was only 15 K or so, over about an hour and a half. Not a record pace, shall we say? Then again, I wasn't trying for it. This was a nice ride with lots of stops for photos. I was invited on a 90 K ride on Sunday, and I turned it down. I'd be dropped SO FAST! Just not ready for that. Maybe next year.