A survivor, and first summer run

Once upon a time a nice young couple stretched their finances to the breaking point to buy a house. It was a close thing, just barely skating within the banks requirements about mortgage payments vs household income.

The next year they planted a hedge rather than doing a fence. The hedge was by mail order, and arrived early. There they were, flailing away at the ground in a blinding snowstorm, trying to dig a trench in rock hard soil. The inch or so of topsoil was easy. The bit of clay under that was tough. The pit run under that was brutal. The trench got smaller and smaller as they worked across the lot. The neighbours pointed and laughed.

The hedge didn't do so well, and a few years later they dug it up and gave it to a neighbour. It did, and is doing just fine. Traitorous little bastards. Installing the first fence was an adventure for the fencing crew. Later that fence was mostly rotting away and I built a lattice fence out of cedar 1x2. It was quite nice. Linda planted a garden in the corner and put in two climatis vines. They did really well there, spreading out and taking over that part of the fence.

Later on that fence started falling apart, and we wanted to put in a nice patio in the back. Linda dug out the roots and we cut the two plants off the lattice as best we could, and put them on some lattice beside the house. We were mildly astonished they survived.

Now we see them sending out new leaves and shoots already this year, so I think they're on the verge of a come back. Maybe they'll find this lattice just as congenial as the last one, though they've got a climbing rose for competition. I always remembered the Greek fable about Baucis and Philemon. I wonder if these two plants talk to each other. They've been together a long time.

Here's one of them. 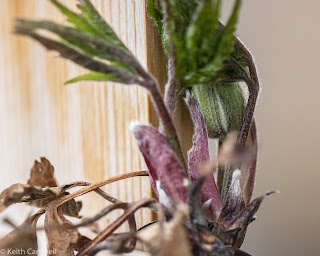 That's one thing I admire in plants. Their tenacity. They just keep growing as best they can. In plants we like, that's lovely. We try to encourage them. For the ones we don't, like the damned bee balm, and the anise hyssop, and the (many expletives deleted) vetch, it's less endearing.

Today is summer. Maybe it was summer, but I think it likely there will be more summer to happen. Just not tomorrow, looking at the forecast. BRBE and I ran along the bluff on part of the 70.3 run course, and up to 22X. We walked up the hill (described by another buddy as 'big bastard hill') on the way back. The plan was to run 12 or 13 K, but I called it at 11. The heat was starting to get to me and my hams were complaining. I'm pretty sure I could have made the 13, but I'm trying not to hurt myself. One of my rules for improving and coming back from injury is to stop before you have to stop. There's times I've wished for some plant tenacity.

Our poor lilies are still under attack by lily beetles. We've been crushing them upon discovery. I went and got some tea tree oil, as supposedly they don't like the scent. I sprinkled some on the ground around the plants, and of course it's all over my fingers now. Next time I'll wear gloves.