This was a tough blog title to work. Often I'll have something happen, or someone will say something, and I'll know right then it's a blog title. There was a comment today about a great big windshield that I could have done something with, but the rock snot had to be done. Just had to. We had tons of sunshine coming into the house today, and the cats were writhing on the floor. How could I not take a photo? Or two. Or two dozen... 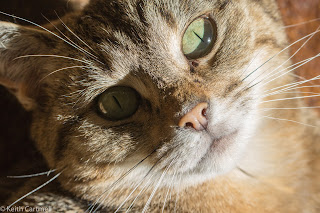 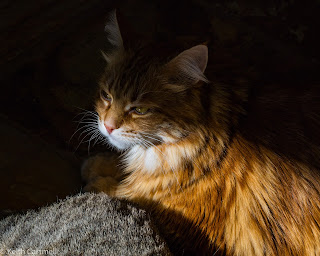 That last photo of Curtis and Celina did not turn anything like I expected. When I saw that line of shadow above his eyes on screen it totally changed how I was going to edit the shot. Yes, I could have brightened it up and showed the wall and floor without blowing out the white patch of fur. But no way! I love how his ears and eyes emerge from the shadow, and the sunlight picks out the highlights on his fur. Maybe you can't see that in the web version, but I sure see it in my version.

The light was interesting this morning so I had a go at some of my series one abstracts. None of them did quite what I thought they were going to do. Even so, I like the shapes here. 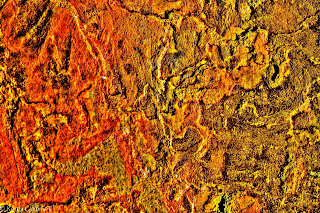 In comparison, here's one of the series two. 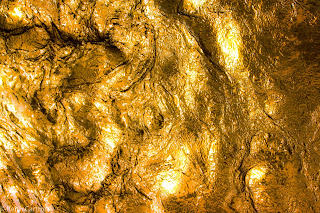 Lastly, the rock snot. I know you're all burning with curiosity. I'd never heard of it before. 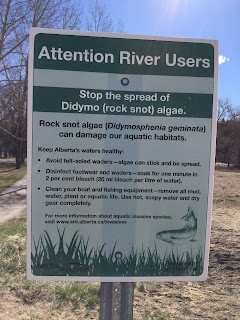 This was seen during our run in Fish Creek. The weather was nice and both of us (or more importantly, our legs) felt like running. We explored the north part of the 70.3 run course, from 22X up to somewhere about the turnaround point. Lots of people out running today. I ended up 12.2 K, 1.5 hrs, 7:23 pace.

This was a happy run! It's surprising how one day you don't want to run and the next day you do. My "run" earlier in the week was a 2 K train wreak. I stopped before I was going to hurt myself. Today, 12 K nice and easy. Michelle blames her shoes and switched them up. I'm not sure what it was with me. My half marathon is June 17, so 7 weeks out, and I'm feeling apprehensive. I'd hoped to get a good training cycle done this year and maybe flirt with breaking 2 hours. No way that's going to happen. I'm going to be happy to finish and earn my cinnamon bun. The problem is, I'd told myself there weren't going to be any more races where I was going to be happy to finish.

I'm happily picking through the April photos looking for the Image Of The Month. Stay tuned.