Lots of catching up to do, in lots of different areas. Normally I like to try to be on top of things, or even a little ahead. It seems the last little while I've been just on the verge of falling behind, do a Red Queen sort of thing. So here we go. This might not be exactly the most coherent post.

Thursday after work I was supposed to give blood. It was snowing a lot. Just toward the end of the day I was really getting my teeth into work, and wouldn't have minded staying a while. But no, I trudged out into the snow and gave away some of my nearly perfect blood. Then back to the car waiting for Linda to get out of her yoga class. Watching drivers behave like idiots downtown, wondering what the drive home would be like. It turned out to be not bad, taking very little longer than normal, but a lot more stressful than normal. Roads were shite.

Friday morning I was up early, back working on the xl from home. Once breakfast settled I was on the bike for a good ride. Two hours. Good warmup, some endurance, then some really high effort spins for a short period. Once my heart rate got back down to a reasonable level I'd be off again. I like the sound the trainer makes. Then back onto the spreadsheet. This office chair is ok for a little while, but it isn't good for long term stuff. In fact, the Open Office software I use is a bit more painful than XL. Lots more clicks to do the same thing.

Friday evening I was off to an art show. The artist I was interested in seeing was Neil Z. Love his photos. Here's a nearly full circle montage of the room at the Village Brewery. I was thinking of getting some cards to send to people, but then realized I had no idea how many people we were going to send cards to this year. Need to figure that out. Nice show.

I managed to get into Costco just before closing, even with having to get around one guy and his cart that was being a complete dickhead. They moved the cheese. Again. At least I knew where to find everything else. Nobody got trampled. Their machines hate my personal debit card, but are ok with my company one. So I need to shuffle some money around. Sigh.

Saturday I was in the pool, but I'm not sure I'd say that what I was doing was swimming. I felt curiously out of it, barely going through the motions. I was more interested in the gong show happening in the next lane. At first I thought she was water running, but no, it was some slow motion variant of breast stroke. In sort of the same space as them was a guy who thought his mission today was to aerate the pool water. With them was another person that could mostly swim, but didn't want to join me and the two other guys in our lane. He'd have just been in the way, because that's what was happening in their lane. I think every lap was a new agreement on the direction of circle motion, or splitting the lane. I only swam 45 minutes, and it was a bit of a struggle. I never felt in the groove.

From there I was off to the Calgary market. Such an amazing place. Coffee. A date square nearly the size of my head with a layer of dates in the middle that was enormous. It didn't make it to the car.

Saturday was to be the inaugural Fish Creek Bison run. In preparation we were tidying the house so our guests wouldn't be attacked by feral dust bunnies. Our cats are falling down on the job, showing no interest in culling the herd.

Cats have an interesting relationship with the vacuum cleaner. Sebastian wasn't afraid of it, and liked being chased by it, he knew it was all fun. Nefertitti didn't care for it, but moved from place to place in a dignified way to avoid it. Amelia was terrified of it. Curtis almost refuses to notice it, then tries to glare it to death if it gets too close. Celina is cautiously interested in it. She follows along, playing with the hose. While I was on the computer exchanging emails with several of the runners who bailed, I mean, wisely chose to not run outside given the weather of the morning and their personal preferences. While I was doing that, Celina was checking out the vacuum cleaner. I wish I'd had the video running. 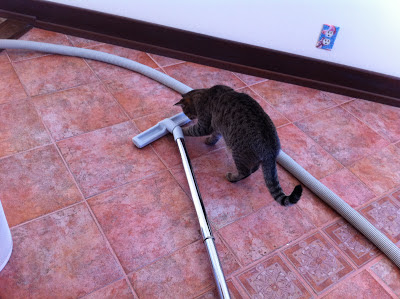 Sophia, Kris, and Evie showed up. Here's what it looked like as we headed out for the run. I'll probably play with some of these in Snapseed. 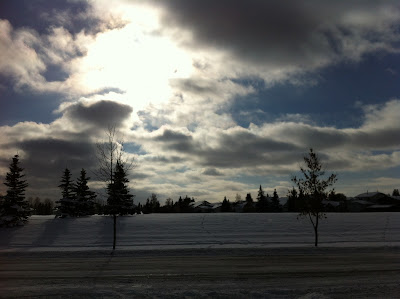 We drove down into the park so we could see more of it, parking just about where the 2 K marker is.

We ran to the hill of death, but didn't try running up it. That didn't look like much fun at all. Sophia wants to come back and try in the summer. 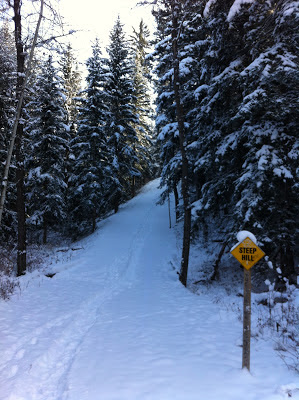 From there we ran along, chatting, stopping every now and then to get photos. The park is beautiful all the time, in different ways, but today was stunning. Sunshine, no wind, not too cold, nice company, not  trying to run too fast, or too slow. One of the nicest runs I've ever had. 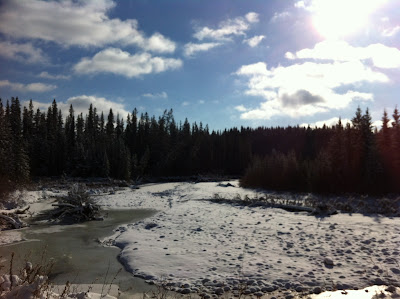 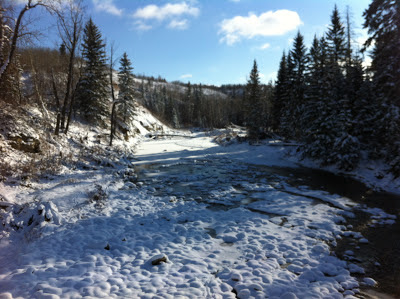 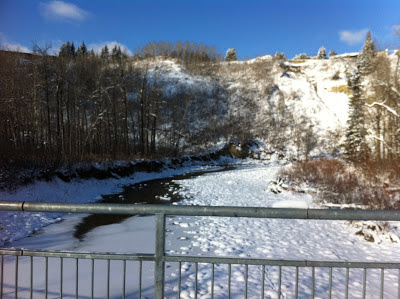 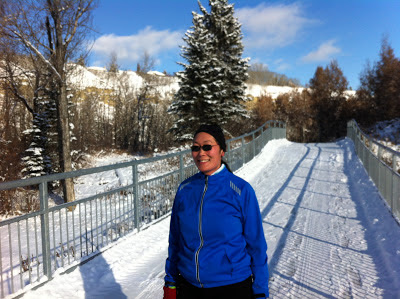 Here we are just finishing. It's hard to get a photo of yourself when you can't see the screen of the phone at all. This was a bit of a guess, and it took a couple of tries. 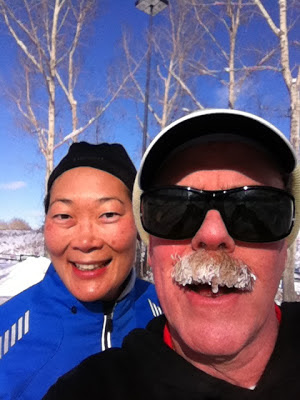 We were really pleased at our pace. The first spike is stopping at the hill of death. The other spikes are stopping briefly for photos, and at 6 we walked a very little bit. At the very end she sped up, knowing we were almost done. I had to work a bit to stay with her. 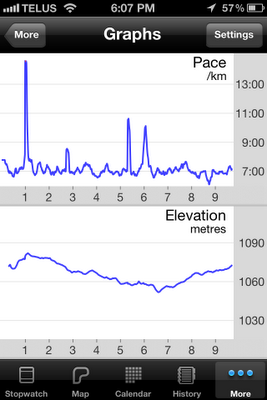 We ended up running nice and easy just under 10 K in an hour and 10 minutes or so, then walking a bit to cool down, then stretching some more when we got back to the house. Bison burgers were BBQ'd. Beans done with sausage and duck were the side dish. Buns with goodies in them for dessert. Wine. Coffee. Chatting. A wonderful afternoon. Evie is a delightful child. I didn't even have to break out my supply of duct tape.

I'm struggling with Cloud Atlas a bit. When I was browsing through it in the store, I was totally hooked, so I'm not sure what's happened. The new Jasper Fforde is much more interesting at the moment. And the new Lois McMaster Bujold novel arrived. Linda is tearing through it now, and I'll be on it next.