I found a stride!

Once upon a time, I could run. Then I didn't for a very long time. Then I decided to try moving faster than a walk, for longer than it took to catch a train or bus, or beat the lights crossing a street. That was just over 1300 blog posts ago.

Since then there have been times it was a struggle, times I seriously thought I was on the verge of heat stroke, times I wondered if I'd ever get beyond the T Rex caught in a tarpit pace. Every now and then, for a little while, running feels natural, fast, effortless. Very shortly after reality abruptly intrudes. Or I wake up because the alarm clock is doing it's thing.

Today was nice, sunny and just above freezing. I didn't really have any plan in place. I figured I'd start, and run what felt right, but probably not go too hard. The first K wasn't a struggle exactly. My feet felt light, but not really sure they wanted to run. Just before the 1 K mark it came together. I found a stride, and settled in at what used to be a lung searing race pace, only this was comfortably aerobic. Not chat chat chat, but not gasping either. I know for many of you just over a 6 minute per K pace (Just under a 10 minute mile) will seem slow, but to me it seems fast, especially for a training run.

This is hard for me to describe, but I kept having to relax my shoulders, and every time I did, my pace would pick up and my run would feel better. My feet and legs felt light, with a quick turnover, and it was like my body was floating along. There were a few times when I'd dial back a bit, or thought I had, and yet I don't see that on the graph. I was having a great time running, all the way up to just before the 7 K mark. Then it caught up to me and it seemed like I was breathing really hard for not going very fast.

I got a bit of a rest at the lights, then ran easy back to the house. At first the 7 minute per K pace seemed harder than the just over 6, then I settled in, although it didn't feel as good as before. By the end of the 2 K I think I could have put together a few more fast K's, but decided not to, and walked back to the house. Stretched. My legs feel pretty good, though my knees are a bit tired, and don't want to bend much.

I'm not sure if this is from an increase in cardio so I can run faster and longer, or if my stride is more efficient so I'm going faster on the same effort. Maybe a bit of both. Either way I'm happy. 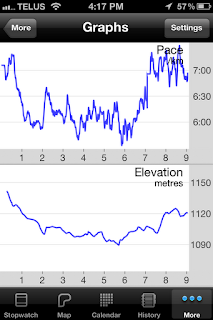