I found myself here the other day, and thought I'd grab a photo. 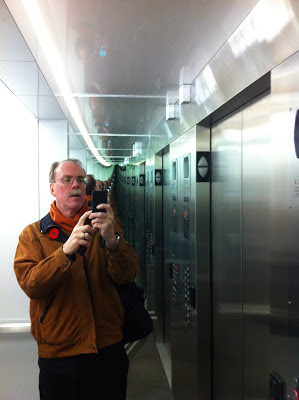 Busy lately. Massage Tuesday. I thought my legs were the sore part and my shoulders weren't bothering me. Till she started digging in and found lots of owieness. Lots. Very owie. Once home, after fighting our way through brutal traffic, I went out for a nice brisk but relaxing walk.

Then I settled in following the US elections on twitter and a few other sites. I'm glad it's over. I watched the coverage of the Obama party for a short time, and they were clearly having a good time. Then I watched the Romney channel for a little while. The difference was amazing and I'm not talking mood. In probably an hour of the Romney video feed of the reception, I only saw white people. Well dressed white people from geezers down to children up past their bedtime. No doubt their parents told them they should be there for the historic occasion. No Asian people, no black or brown people. Just white folks.

I found out later, this was strictly invite only, with the secret service there to shoot anyone that looked like they might be thinking of considering trying to join the party, complete with helicopters fluttering overhead, no doubt armed with the full extremes of military weaponry. They expected him to be president elect by the end of the evening, after all. They were all pretty sad looking by the time I tuned in, and it didn't get any better as I was watching.

That told me all I needed to know. Who he'd be running his government for. Who he thinks is important. In a few years, as America becomes more racially diverse, and therefore less white, historians might look back on tonight as the last significant attempt by old angry white men to roll back the world to when they were in charge of everyone and everything.

Republicans have to take a look at themselves. Some will be saying they failed because their candidate wasn't conservative enough. Those people are breathing air that has something different than what the rest of us are getting. Some of the senate candidates that were not elected were as extremely conservative as it's possible to get. Most people didn't vote for them. Like it or not, the racially divisive, wealth pandering, vote suppressive, misogynic campaign platform is not going to work, and the sooner they stop trying to make it work, the sooner they can start working on winning votes, instead of trying to deny them to the other party. By then they'll be well on their way to joining the 20th century again. Or they can let the Tea Party nutters take over and try the more conservative route, and lose even more votes.

Wed was a nice 45 minute swim in the morning, much the typical workout. Working on trying to be smooth and relaxed. Yoga in the evening was good, working the shoulders a fair bit, which all felt good.

Looking forward to the long weekend. Thinking about a 3fer on Monday. Hope it doesn't snow too much between now and then.