The running herds of dawn

It seems like it's been weeks since we've seen the sun. People living in Vancouver and other less fortunate places are used it, but Calgary gets a lot of sun. Do not fool yourself into thinking we get a lot of warmth. That would be a serious, potentially Darwinian mistake.

When we don't get sunshine Calgarians get cranky. There's been a lot of that going around.

The dawn was beautiful this morning. It gets me closer to appreciating how primitive people could be come sun worshipers, and celebrating when they notice the days getting longer. I was up early and had to get a photo. 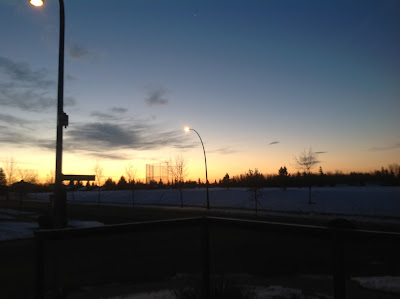 This is from yesterday, just as I was firing up the BBQ. It isn't a good photo of a chinook coming in, but it will do. 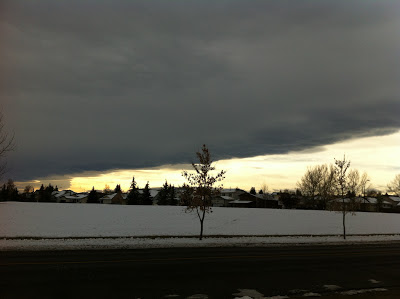 We had friends over Saturday, and you can tell the conversation bored the cats. 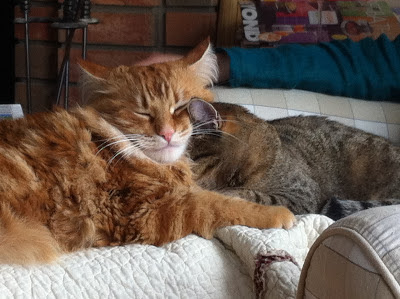 I waited till the sun was fully up before heading out for my run, but the crowds were there waiting for me. I have never, ever seen so many people running on this path, outside of race days. There were a few times I had to slow down to wait for on coming traffic before passing. Most people were being pretty good. Everybody except one sour puss were smiling and happy. The one big group I passed were a very happy and chatty bunch.

Which leads me to a happy making point. I am normally the passee not the passer during my runs. I think this is the most people I've ever passed on a run, yet I wasn't trying especially to run fast. It was so nice out my plan was to just run what my legs felt like doing. The first 5 K felt easy, then it got a bit tougher. I was struggling a bit between 5 and 7 K, then got it back together for the rest of the run.

Most of the dogs were pretty good, but one pair had particularly stupid humans. It's fine to stop on the path, when nobody is coming, but have a look first. These guys just stopped a few yards in front of me dogs and all decided to chat. I warned them I was there, and maybe that was a bad idea. They panicked and it was cute to see, but unproductive about clearing any obvious track.

One geezer failed his pedestrian license. I'm chugging along. He and his buddy were walking along. All was as it should be. I move over to the left to pass, and he clues in that I'm coming. While trying to look over his right shoulder, he edges over to his left, into my path. His mobility isn't good, so he's twisting further and further, actually beginning to back into my path. I squeaked by him as he was turning in place, standing in the middle of the wrong side of the path. Good thing I wasn't on a bike or that there wasn't oncoming traffic.

Still, it's nice to see so many people out and about on a fine morning. I'll bet everybody cancelled their Saturday walk, and took advantage of the sun as soon as they saw the nice weather report wasn't some cruel hoax.

Walked briskly and ran very easy to where I started, and walked about a K back to the house. Stretched after. There is a thing I like to do sometimes, and I did it this afternoon. I also did it here, here, here, and here. 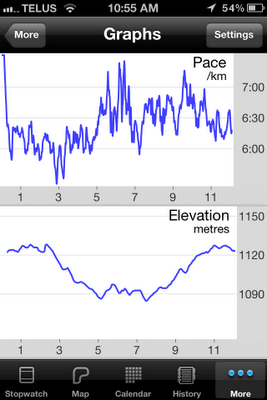 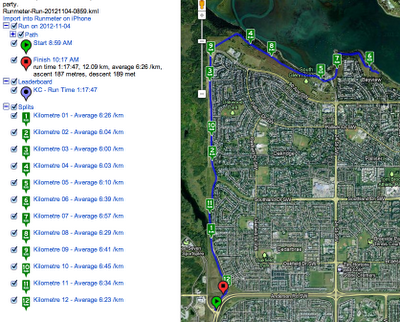