A few things have come together over this week that have left me feeling that I was way out on the short end of the stick. One was having reached a training peak and needing to back off a bit. Another was several meals of duck and sausage in beans. Another was realizing I was up to 3, sometimes 4 big cups of coffee a day.

The last few days have not been fun. I had not connected all those things until this morning. It just happened that I was cutting back on coffee the same time as I cut back on training. The beans and meat were one of the meals for several days in a row. A rich meal. One that left me feeling somewhat heavy internally. If you really need more of a hint, read this one of SUAR's recent blogs.

I've been a cranky, headachy, sleepy mess for the last couple of days. A huge xl at work requiring detailed comparisons of almost matching data (does the differing ID numbers fit a pattern, or are they really different assets?) didn't help much.

Thursday the main lighting was out at Talisman, so there were restrictions on facility usage. It made for a crowded pool, but I somehow managed to get a half lane to myself. Swam 30 minutes, working on form, noticing that I was finding it very hard to catch my breath after what should be semi-hard efforts, but felt very hard. I liked the dimmer lighting.

Thursday was a very early night. I thought briefly of spinning. Very briefly. The thinking not the spinning, then I went to bed.

Friday morning I didn't even consider swimming. I felt horrible. After doing a bit of coffee research, I got a small cup, half decaf half regular, and felt considerably better soon after. My rule is no more than one cup a day now. Let's see how that goes.

The geezers attacked on the way home. Once was coming out of the classy Brittania shops, where the Sunterra on Elbow is. I'd turned south onto Elbow. A car going south had just passed me, with a signal going to turn left onto 50th Ave. He (it was a he) was starting to move to the left, then changed his mind. Without looking, without changing his signal, he steered hard right across 4 lanes of traffic to end up turning right onto 50th. I saw him coming and got slowed down in time. The guy in the SUV beside me didn't notice at first and must have just about wet his pants. There was a horn.

The parking lot at Kingsland. A geezer (gender indeterminate this time) came out of a parking spot as I was leaving the mall. Once I realized they hadn't a clue I was there, and only the vague realization there was a building there (they nearly hit a support pillar) I backed up into the doorway again. Another couple did the same thing as they slowly drove past. I noted where they were going and went out another way. Scored a rack of lamb, huge. Guess what you're having for dinner on Sunday, Kelly.

A double left turn from Heritage to southbound 14th St. Many people want to get all the way over to the right to get into Glenmore Landing, or go west on 90th. It's a bit of a game sometimes, since the far left turn lane often does not have as much traffic in it. I'm in the middle lane, do my left, and promptly move over to the right. So far so good. A geezer, I think a he but won't swear to it, had been in the left lane, and I think he wanted into my lane. He was weaving all over the place, starting into the lane, then swerving back, even though there was nobody in that lane. At one point I thought he was going over the median. I kept a careful eye on him, and a swerve took him or her all the way from the left lane right into the exit for the mall. I saw him coming in time to speed up and make room. The guy behind me was less pleased. There was another horn. Another day in Calgary traffic.

Stuff like this makes me want to see everyone put into driving simulators to test their skills. I'm beginning to seriously think about how much this would cost, and if I could get the government interested. I suspect it would cost lots to start with, but the savings in gained human productivity and associated taxes, lessened health care demands from collision fallout, lessened damage to roadway infrastructure (do you have ANY idea how expensive it is?) would pay for it pretty quick. I think. Plus there is the intangible of having an objective method of testing drivers. Hopefully it would get the idiots off the road.

Calgary is thinking of spending a billion dollars it doesn't have to put some new bridges over the Bow at Crowhild, to say nothing of razing parts of several neighborhoods. But if we could weed out 10% of the drivers, maybe we could make do with existing infrastructure. Hmmm.

Friday evening I was feeling pretty good, so I tried a spin. One hour, easy spin. It took my legs a long time to get even partially woken up. Anything much over 100 rpm felt really hard so I didn't push it.

Now that I'm home, and my workout (such as it is) is done, here's my reward. Dust and all. Bottled April 2009, and this is the last one. Wonderful. A good start to the weekend. 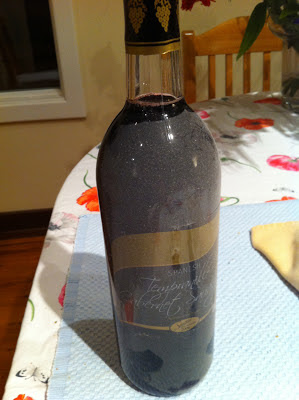