Today is a rest day, for my body at least. I don't have to do anything more strenuous than putter about the house and go out for dinner with some buddies. I was up early to browse blogs and chat with some buddies by MSM. I've had lots of coffee, read the papers, watched the snow and I'm feeling thoughtful. It had been raining off and on last night, and just as I was going over to the 7-11 to get papers it started to snow. A few minutes later it was snowing really hard with those huge flakes. A couple hours later and there is several cm on the ground. It looks like this out our back door. 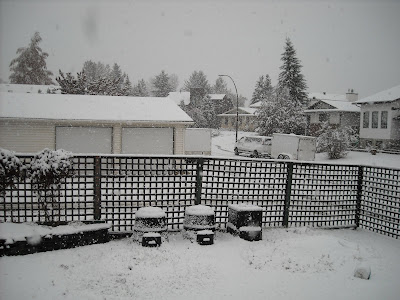 Calgary has some amazing sunrises and sunsets. Here's a recent sunrise. I like to watch them when I can. The quality of light is so amazing, and it will never again happen just quite that way again. 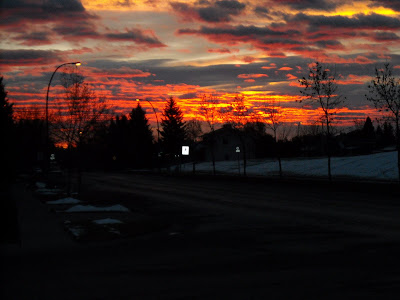 Some of you know that we don't watch television. I believe that too much TV turns your brain into tapicoa pudding. However, there are some TV shows that we like and we buy or rent DVD's. That way we can watch them without commercials. Lately we've watched the first season of True Blood, and are currently working our way through The Sarah Conner Chronicles. Other TV shows in our DVD library include, Stargate, Dead Like Me, Coupling, Foyle's War, Yes Minister and Yes Prime Minister (which I still think is one of the funniest programs ever aired) Class Act, Firefly, Planet Earth, and all of the Miss Marple's with Joan Hickson. I'd like to get Mythbusters because those are fun, and some of the shows about big or interesting stuff that Discovery Channel puts on.

I've been thinking about how what goes into our minds, or goes on in our minds, affects our bodies. Many of you have spoken of how mental attitude has influenced how well you did in a triathlon or other race, or during training. At one point while I was watching Kona a couple weeks ago, the camera was on Mirinda for a while as she ran past a male pro, and passed a female pro to get into second place. She passed them like she was just starting her race on top of a huge jolt of caffine. I was watching her stride and was thinking she should get that video and market it as a learn to run thing. She has amazing running form.

During my run on Friday I was thinking of that. How it looked like she was supported by wires with her legs moving under her. I could feel myself straighten up, my hips shifting forward a bit, my lean changing, and my running becoming easier. I'm still new to running, really, and can't help but compare it to the swimming. I like to think I have a very smooth swim stroke. I certainly swim faster than almost all the recreational swimmers in the pool, and I leave behind a lot less splash and froth. Yet when I was chatting to a life guard one day, we noted that one particular swimmer was probably burning twice as many calories per length than I do. The same is probably true for my run, only I'm the one burning more calories, and not just because I'm big. I'm probably an inefficient runner. Better than I was, and I'm still making progress, but still inefficient.

The only way to improve is to do it more while doing it better. It does no good to practice poor form. This gets back to the mental imagery. Visualizing good form is hard, and keeping it in mind is even harder. Just like we exercise our bodies to get stronger, I'm also trying to exercise my mind. Part of that is not dumping in too much crap from TV, and especially TV commercials. Part of this is trying to stay focussed during workouts: thinking about spinning smoothly, or running with a quick turnover, or maintaining good form in the pool.

In some ways keeping our minds on the task at hand, in the present moment is the hardest thing we can do. There are so many effing distractions! Family. Jobs. Friends. Workout goals, desires, fears. Characters from books or movies that come to visit. Pain. Girbils. Being bored, or tired, or frazzled. We are constantly bombarded with images, words, noise, vibrations, and smells. Even trying to filter them out takes a mental effort.

Remember the scene from The 5th Element, where Lelu walks out onto the ledge and sees the city? There are lots of days I feel like that, totally overwhelmed. It's almost a relief to get into a workout, where I can mostly control what's coming at me, and I only need to think of myself and my workout goals. I think there's something very honest and pure about physical effort. It's just you and the pool, or the bike, or the run distance. Getting into the groove can be so difficult, but so rewarding when it happens. Having your mind in tune with your body is a magical experience. It seems so easy then. You're running along, and it's like you're floating. Sort of like lucid dreaming, in some ways. You're trying to maintain a delicate balance, staying focused and aware yet not actually thinking about the specific mechanics of the motions. That hasn't happened to me for more than a few moments at a time, but I think that Mirinda was totally in that zone while I was watching. Probably in that zone for most of the run, actually. She did the 13th fastest time for the marathon at Kona. That doesn't happen by accident.

But it isn't just a mind game. There's the physical part too. Building the skills to do it right, and the endurance to keep doing it right for hours on end. It looks so easy. Teaching your body how to deal with heat, humidity, wind and all the other factors that come at us during training and racing. It comes down to mental and physical toughness together. One alone is useless.

A couple years ago I was way overweight, and more than that, I was a softie. Triathlon, and my triathlon buddies, both in person and blog, have helped teach me to be much tougher and more disciplined about getting out and getting it done. It carries over into other parts of my life. I get started and get through it. A buddy of mine recently said they couldn't imagine doing an Ironman. That's the problem, he couldn't imagine it. He can imagine lots of other stuff and put that into action, so it isn't a failure. Ironman isn't a goal for him.

Somehow, it became a goal for many of the people that read this blog. Somehow, they imagined themselves doing an Ironman, then went and did the work to cross that finish line. Being involved in triathlon has taught me that imagining a goal is the first step to realizing it. As one of my favourite female characters says "First you see it. Then you be it." Anybody recognize the quote? Hint, the author is an award winning science fiction writer.

What's good about TV is that it can show us the best of people. Granted, the signal to noise ratio is miniscule, so small I generally don't bother. But it is there. The shows we watch generally have a positive outlook, with strong characters going about their business. It's all a story, but the characters generally get on with dealing with their world.

The internet is new and remarkable in that we can see an unvarnished look at humanity at both it's best and worst. It becomes easier for the winners to find each other, and gives us the tools to stay in touch. Hanging out with other winners is so much fun, and helps you over the tough times because they've been there too. It bugs me when someone tells me I'm doing great, when they have no idea what I'm going through. I was struggling through one tri and got a real lift when a guy who was 10 K ahead of me on the run slowed down for a sec and said, "hey, keep going, the finish line is sooner than you're thinking it is right now. You're doing fine, keep going." That meant the world to me at that moment.