I don't think any of you guessed what that means here. Some of you, and you know who you are, are probably getting all excited thinking it's something at least semi-shocking, something grown-ups do but don't talk about. Pfft! It stands for Dust Bunny Suppression Duty. I like to give the dust bunnies a sporting chance, to let them get a bit bigger, before chasing them with the horrible vacu-sucker. Plus, I like the sound they make when you catch a really big one. Linda thinks my waiting for them to get big, and dust bunny season to open, is just another word for being lazy. I was surprised this dust bunny spawning ground didn't have any,

but there were a couple medium sized ones under the bed. 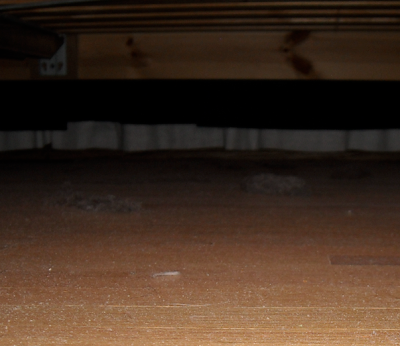 Thursday I had a big core workout with my coach. She wanted to see just how badly I did core stuff. I am grateful she didn't stand there covering her eyes. I guess that's what being a pro is all about; she's probably seen much worse. I hope. She fixed a few things, and we've tweaked some of the routines. I simply can't do the oblique crunch thing because I can't sit up far enough. So we changed it to starting from sitting up instead of lying down. I got shown a bunch of stuff, all very cool. She showed me one of the pics they have in the gym, some young guy with a six or eight pack at least, and said that's what I'll look like. Yeah, in my dreams. No, not even then, if I'm dreaming, it's not about *my* abs.

Then I got lazy. It was cold out, about 10 C and I just couldn't summon the energy to ride outside. I was already cold, and it was going to be a very cold ride. So I hit the trainer for about 45 minutes, finding a gear where I can pedal 85-90 rpm at 125 bpm heart rate. Did some one leg drill, and can do it much longer than I could in the spring, WITHOUT that annoying 'clunk' at the top of the stroke!! Yay me!

Today was a swim, a sort of decreasing pyramid, 500 m, 400, 300, 200, 100, with increasing effort and decreasing rest times. Oddly enough, this does not particularly add up to faster times per 100m. Or at least I don't think so. I lost count a couple of times, so I maybe did some extra. What with warm up and cool down, this was about 45 minutes. Then the dive tank for 20 minutes for core and deep water running. I left when the formal class started. They had lane ropes strung up, and people in neat lines. That was much too much organization for me.

A little bit later I did about 20 minutes of easy spin on the bike to warm up my legs. I haven't been running much lately, and want to make sure I start easy. From there I ran around the block, about 3.1 K in 19:30, nice and easy and relaxed. Tried to concentrate on my posture, and think about running with light feet with a good turnover. No heart rate monitor. I wanted to go by how my legs felt, not an arbitrary number. It was a great day for a run, sunny and a bit cool. Just after my run it started clouding over, and the forecast is calling for snow tonight.

I got tagged by Julie, who had been tagged by Leana. Julie won a prize for answering the questions. I'm not sure what I get. If anything. Some of these may need to be annotated. That will be afterword. It's up to you to match up the annotation with the question. I'm much too lazy to number them as footnotes.

Not really sure why I carry it around, since hardly anyone calls me. What I have, what there is of it, is actually sort of a dirty blonde, when it's not drenched with sweat or pool water. Peanut butter and honey sandwich. You don't really want to know about my dreams, trust me. Most of them are at least R rated, and Linda says they are extremely strange. I'd be afraid to discuss them with a dream interpreter because I'm not likely to make it out of their office, which is why I'm interested in dream interpretation. Going by volume, it's probably water, then Orange Juice, but that's two words. Red wine, especially old world. I don't dare put a time goal on it. Double mint chocolate chip cookies with nuts. To Linda's despair, I take my cookie QA duties very seriously, needing to sample the batter before it goes in the oven, and after of course. I am very squeamish about damage to my eyes. I could never put in contacts, and just reading about the LASIK surgery had me whimpering and cringing. Everybody says I need to get out more. That would be a top of the line Orbea tri-bike. I suppose I could settle for a P4, they're kind of nice too. It's not actually a TV, since it's not hooked to a cable box. All we do on it is watch DVD's. Sometimes we watch TV shows in DVD, which is the only civilized way of doing it, to avoid the commercials. The latest shows we like are True Blood, and the Sarah Conner Chronicles. I'm a knowing lots of people a bit kind of person, rather than a few good friends. I am astonished that some people have known their friends since kindergarten. If you were smelling what Linda is making for supper tonight, you'd be hungry too. We're having G&G over, since it's G's birthday a few days ago; they're a couple we've known just about the longest. There are a zillion things I'm not wearing, and I'm not gonna list them here. It was a tough choice between MEC, Apple Store, Indigo, and Lazy Loaf and Kettle. The real favourite store doesn't exist anymore, but a friend used to own a bookstore called Blue Castle Books. It was mostly romance stuff, but there was a devilish section that might have been called 'books the owner knows she will sell to certain named people'. She could go through a book catalogue, and know she could sell x many copies of some particular book, and could name those people, and rely on the first of us who bought to tell the others via gloating. A very particular orange and black plaid. Nobody reading this will know what I mean by saying the 'one true seneschal plaid'. If you do know, look me up and say hi. If I have to, I'll take a photo. But you'll have to ask really nice. You don't want to know what made me laugh. I have a very strange sense of humour. It's a toss up between eating in front of the computer or in my favourite reading chair. I almost always eat breakfast in front of the computer, reading blogs. I've learned to be careful timing my bites, having lost one keyboard, and having to clean the monitor a couple of times. Granola, with walnuts, pecans, almonds, hazelnuts, banana, cranraisins, and maybe chocolate chips, if you must know. Bernard Callebeaut!!! Sometimes with yogurt instead of milk.