A moose and a Lama 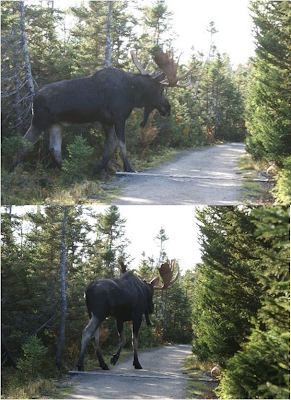 This photo will have at least one of my blog fans all excited. If she wants an actual copy of the photos, and some info about them, send me an email. The address is in my profile. This is just a screen shot.

Linda and I spent part of this afternoon at the Saddledome (which isn't shaped like a saddle, or a dome, and I thought was looking decidedly dusty and dingy on the outside) listening to the Dalai Lama. He's in town for something or other. The lineups were really long, supposedly because of security checks, but they were laughable.

Without having any idea what to expect, we had a really good time. Some Olympic swimmer and Sandra Oh were the MC's. O Canada was sung by Asani in English, French, and Cree. It was beautiful, unlike anything I've ever heard before. Here's a version on youtube, it's worth checking out.

There was a really entertaining dance and shadow show put on by some kids. There was a choir. A native elder offered a prayer and an invocation for peace. A traditional Tibetan group played and sang. All that was good, at the very least. Then The Man showed up. The U of C gave him an honourary doctorate of Law. Once that nonsense was over we sat and listened.

I was struck by the sense of presence about him. He's 74 or 75 now, and was offered help on and off the stage. They might think he's frail, but I think he's strong. He has a masterful face, very kind and gentle, but there is no weakness. He had a man sitting beside him, essentially acting like a translator aid. I had thought he was much more fluent in English than he appeared to be here. He has a nice voice, and speaks well.

The crowd got a chuckle when he spoke of the things that he's not. He's not a healer, for instance, and he spoke of a gall bladder operation proving that. He mentioned he healed quickly after than, and attributed it to his peaceful mind. He spoke of compassion, and how there isn't really any "they" anymore. We're all "we". Hurting them hurts ourselves. We need to find new ways to resolve our differences. I'm not really sure how long he spoke for. There were several questions, a couple silly, but most sensible. This gave him an opportunity to speak more about opening ourselves and working actively on our compassion, and holding peace within ourselves. That being peaceful does not mean being weak.

All in all we very much enjoyed being there and listening to him. I'm not religious in the slightest. Even though he is the religious leader of Tibet, he doesn't come across as religious. He made a specific point about secular humanism. I think he'd be a great guy to have over for tea and cookies and conversation.

Yoga this evening was good. 1.25 hours. Lots of nice stretches, some core work, and a bit longer for my fave pose at the end of class.