Normally blog posts flow pretty quickly. The big 5 part extravaganza didn't actually take all that long to write. (But how long to edit out the expletives and slanderous examples, I hear the peanut gallery asking. Never mind.)

But this morning I've been thinking for two whole cups of coffee and nothing has come to mind. So I thought I'd share some progress on my other writing project, the Dwen's World stories. For those of you new to this (My long time readers might want to skip to the next para, unless you want to be reminded.) I started writing some of the hallucinations I had while working shift work. The plant is an interesting place, and I found science fiction and techno-thriller ways of making it even more interesting and dangerous. The first story, The Bone in the Digester, started off unable to decide if it was a love story, a techno-thriller, or a murder mystery. This grew over the decades, from computer to computer, text format to text format, once nearly getting lost in technological obsolescence, into several related stories spread over several decades. I like the intellectual struggle of seeing the story and characters in my head, and trying to translate that into the word by word experience that readers have. My characters are a fun crowd, usually willing to tell me about their lives, or try out various parts to see what goes with what. I can see them, hear their voices, and know how they'll react to most situations. I was once having lunch with a buddy and saw one of my characters coming out of the patio. That was a bit surreal and I nearly said hello.

There's a piece of software called Aeon Timeline that helps track people and events on a timeline, right down to the second if necessary, even using invented date systems if you want. This helps keep things in the right order, so that characters don't talk about something that hasn't happened yet. Sometimes birthdays are important. Being able to drive, or rent a car, or have kids in high school, or the amount of work experience you have are all related to how old a person is. The software lets you track birth and death dates, and calculates the ages of all the people involved in an event. 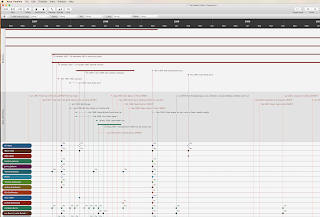 You can see events across the top, in two groups. People are at the lower left, and the intersecting timelines are across the bottom. You can rearrange them as much as you want. I've got them grouped into background events, and a story arc. If you had several stories in several geographic areas that come together, you could group them separately for ease of working, or together to make sure everything lines up right. You can expand or contract the time scale, and things shift around on screen.

If you squint or embiggen, you'll see that I've got some events with a tentative date, like "Reception at Davenports, WHEN?" This is a case where I know the sequence of events, but not exactly when they take place, or how much time is between them. The timeline lets me move things around, and then smooth the text as required. I'm trying to work it so that each event on the timeline is a chunk of text, or affects the text.

It's the simple things, like knowing it's a summer day, and therefore your characters are not wearing parka and snow pants, or they are because it's February and they're going snowshoeing. Or not having them remind each other of events that took place a couple days ago. Or as I mentioned, having your characters talk about something that hasn't happened yet, or someone that isn't born yet. Or cell phones. When I started writing all this, they didn't exist. Starting about 2010 I need to have my characters becoming aware of cell phones. If I don't get it finalized soon, I'll have to start dealing with autonomous cars. Getting these things wrong indicate sloppy writing and take the reader out of the flow of the moment.

So I've been trying to nail down event dates and fixing the text. It gets complicated. There is one old chunk of text, the first hockey game. There are many events surrounding this, and I was trying to do too much at once, and some of it didn't work. So I tweaked the story line so that various things happened in their own chunk of text, and now I'm left with the dangling remnants, wondering if I even need the hockey any more, and when exactly Zoe gets pregnant. Which would then drive me back to those chunks of text for further revision.

There are things that happened to one character during the time span I'm looking at now, that are not part of that story. They come out quite a bit later in a different story. But I still have to write the character now, so when the reader sees the story coming out later, they go, now I get it, and not, WTF how is that possible?

It's lots of fun, with the timeline on the big computer screen, and the laptop on the desk near it, to say nothing of a mug of coffee or mint tea. Sometimes I'm looking at the laptop and trying to move the cursor by using the trackpad. Plus, where the laptop sits is where Curtis likes to sit when he's 'assisting' me. The difficulties us writers face.

You still get a Deadwood of the Day 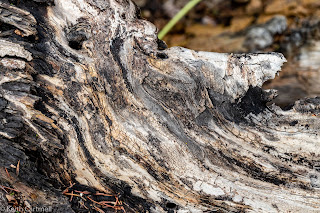 In the serendipity department, here's another photo with the same file number, the lovely and triumphant Michelle! 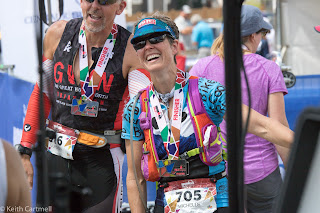