I'm still getting used to this retirement thing. Last week was busy AF with all kinds of stuff. This week is quiet. Today was originally supposed to be another kid camp photo shoot, but they didn't get enough interest. There's the last wine kit of the season to be bottled, so I was scrubbing bottles yesterday. I'm still thinking about a photo with the wine kit boxes and bottles, and have played with several photo ideas in my head, but there's nothing that has worked well enough to try to capture.
The quiet is giving me a chance to work on the current read, but for whatever reason I'm finding it hard to just sit and read about photography. Almost every shot of these various women and I'm thinking what I'd do differently, or why they did it that way, or how the setting enhances the person. Which is good for the current project, I suppose. I hope I'm not paralyzed with indecision when the time comes.
In the end, I got up and went for a walk in Fish Creek, near bridge 10. There's some spots I haven't been into yet, so I was seeing new territory. The light sucked though, being kind of a dull murky cloudy. Lots of people out and about, and I chatted with two older women who weren't quite lost, but had got turned around and were looking for the shortest way back to the parking lot. That's easy to happen if you don't keep track. I live for getting lost in the park, thinking about what's on any particular path that branches off the one I'm on, and how long it's been since I explored it.
I quite liked this shot, and have been wondering if it qualifies as a micro-landscape. It might be a fun puzzle. 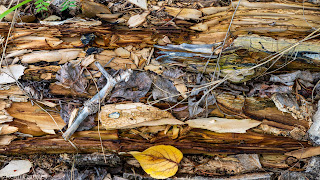 The other shots are more ordinary, there I was, kind of shots. This shot was weird. As I looked at it, I could see all kinds of faces, and yet I don't see them in the photo. Maybe you do. 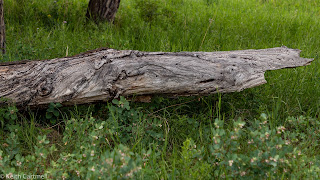 Lily season is well and truly underway! The unblogged folder is filling up with them. Look for a lily in the Of the Day feature.
The sidewalk construction is mostly done. All that remains is for them to come along and put some sod down. There is a plan to do lots of street paving in the neighbourhood, and just lately they are digging up near the bus stops. It makes getting in and out a bit hairy.
Of the Day
Driftwood 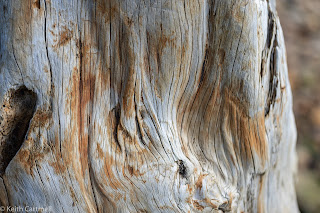 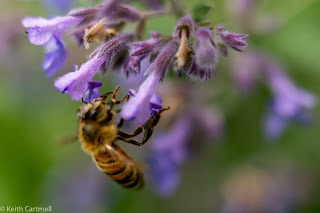 Flower
When I took the shot I was thinking it would turn out to be an abstract of blue and purple, and not really knowing what the subject was. But alas, we can all see it's flowers. 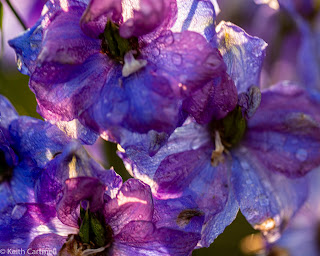 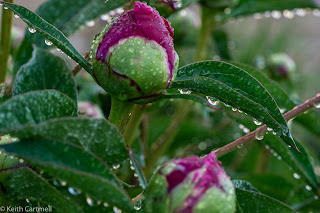 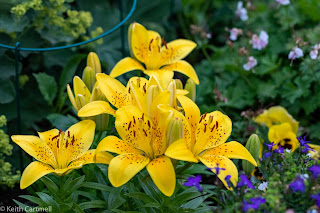 Front garden from July 20. Look at the lilies! 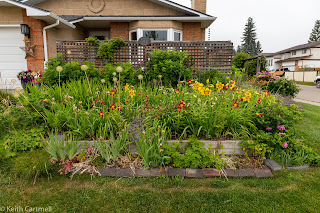 Retro
From September 2016, one of the first photos with the 70-200. Almost 5 years later, I still love the photo. It's my photo editing computer's desktop, so I look at it every day. Lightroom tells me I've taken 46544 photos with that lens, more than with any other lens, and about a third of all the photos I've taken. Much of that is because of sports events and community shoots. That's the go to lens for that. 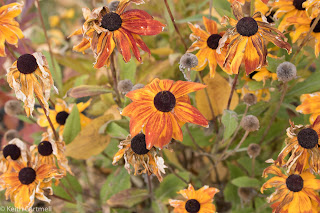