This blog title came to me a couple days ago. This happens sometimes. I'll be in a conversation, or I'll be working on my novels, or my imagination will get just a bit further off the wall than usual, and I'll have a sudden thought. (This usually terrifies Linda but I can't imagine why.) Then I'll think, or say, 'that would make a great blog title'.

And so it does. I have not the slightest idea where this is going. You might want to fasten your seatbelt. In a further warning, this blog has been gestating in draft mode for a while, almost a year if I believe what Blogger is telling me. It's also saying it was published a certain date, but I'm not believing that. If in fact it, or something substantially like it has been published, point out the date to me, and you can drop by to pick out a bottle of wine from the cellar. Onwards.

One of the things that makes humans interesting is that we're interested in different things. I once watched a video of engineers bending a Boeing 777 wing upwards till it broke at 154% of design load. I was riveted by this as the wing slowly bent up, more and more. I could just imagine the look on the faces of the engineering team when the boss comes back and says your calculations were wrong. You said it would break at 150%, figure out where your mistake was.

Lots of people would yawn and go look for a cat video. Even if they are nervous fliers. I'm just glad there are people like those engineers, figuring out how to make structures strong enough to do the job plus a safety factor, but without making it unnecessarily expensive by overbuilding it more than that.

Not everybody is interested in that, and fine. But the ones that are, figured out how to make materials and build engines to routinely carry people halfway round the world in an airplane. Before COVID it was commonplace for people to fly somewhere for some reason, perhaps important, or perhaps not. Our world is mostly better for that; less better in the sense that viruses can travel on the same airplanes.

One of the things that makes me despair about people are those that are smart enough to figure something out, and won't. They ask someone to explain, again and again. They ask someone to do that query, figure out the spreadsheet formula, how to get somewhere, how something works, what settings to use, what does that word mean, and on and on. They don't even try. They're lazy.

Then there are the ones that don't admit that other people are smarter and actually do know better. Anti-vaxxers are the most obvious example lately. In spite of millions of deaths world-wide, a significant percent of the population say they wouldn't get a vaccine against COVID, and give spurious 'reasons'. And they wonder why America has turned into a failed state, and as I write today, the COVID numbers are trending upwards again in Calgary.

Enough of humans. Cats, now. You knew I'd get to cats. I love watching cats. They are a peculiar combination of smart and lazy. They are smart enough to be just domesticated enough to live with us, the recreational cat vomiting olympics aside. They see the advantage of those opposable thumbs to manipulate food containers, but have figured out it's better to control the human that has those thumbs, than to grow them themselves. After all, cats think, we're perfect as is.

Used to be there were barn cats and house cats. Maybe in some places there still are. Barn cats lived by their wits and the occasional dish of milk. They often died young, in miscalculations involving farm machinery or larger mammals. House cats lived longer, generally. House cats now, at least some of them, get better care than some humans. One of the vets in the practice we go to specializes in cat dentistry. Pity that most of the expense of such a procedure is the sedation. It's tough enough to get a cat to open it's mouth to look at the teeth, let alone work on them.

Most cats are convinced they want to go outside periodically. They say it's to hunt food to contribute to the household economy. I think it's to hunt for better humans because they're so disappointed with the ones they have now. "Stupidest humans ever," is something we hear a lot.

But the thing that seems to interest them the most are things that make interesting noises. Like crunchy food. Some of you might remember Sebastian, the big orange cat that lived here from the house opening till Jan 1998. He was absolutely nuts about crackers. I couldn't eat a cracker anywhere in the house at any time of the day without him coming along to politely, but very firmly, help himself. Eventually he trained me to give him a cracker by breaking off a little pieces and letting him nibble one at a time. A whole cracker.
Curtis is fascinated by my morning granola, and often hops up on my desk to help me finish. Maybe it's the milk, but he's interested in other crunchy things. Like the rattle of this keyboard. I only hear it when I've got the hearing aids in. He would come along and investigate, sometimes trying to lie on my hands, while on the keyboard. Sometimes he would just watch the changing screen, and occasionally look at my hands, while offering editorial comments. I miss him doing that.
It's not like we don't feed them. Curtis was prone to a grungy paw infection that we think was caused by a food allergy, since it went away when we fed him a high quality hypoallergenic food. He actually preferred it to the wet food, which was weird. Celina happily chows down on a crunchy food, but doesn't turn her nose up at wet food, or at least most of it. We often think that cats pretend to like or dislike various things at various times, just to mess with the human minds.
Of the Day
Driftwood 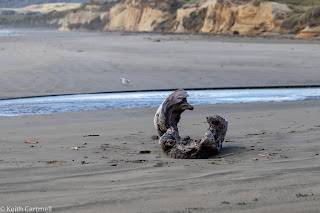 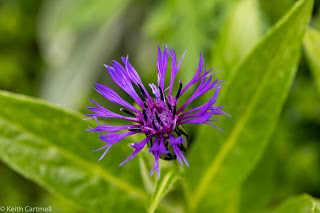 Peony
A matched set, the white and red just getting started. 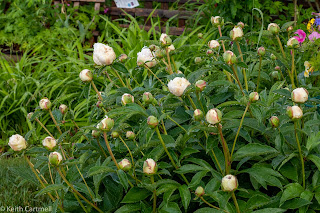 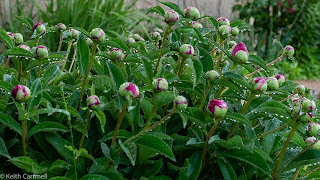 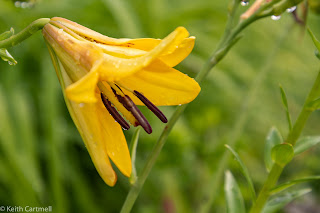 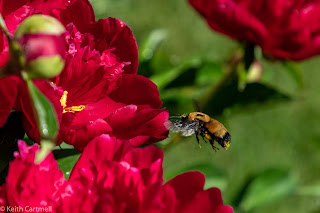 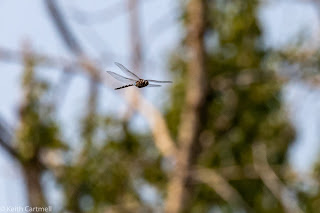 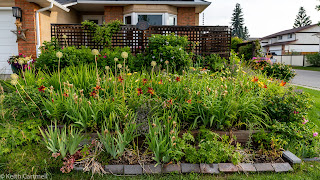 Retro
From late 2016. I remember struggling to put this panorama together, and playing with the editing to capture the mood. I probably would not work with this one now, given there is so much murky blue in the middle. It was shot from what was then the new pedestrian bridge over Anderson Road. I was thinking it was going to be a good place for highway light trails, and maybe dramatic landscapes or sunsets. Except not. There are problems shooting from a bridge unless you're right on top of a support structure. They move, and that screws up the light trails. The view from the two ends are nothing special and there's nothing in the middle of the span.
Now, of course, this shot is impossible. Right beside the person in the lower left, is an exit ramp, and a little further on is a major highway. The hotel is still there, along with some newer buildings. Much less photogenically, there are a bunch of big shiny metal electrical transmission towers. 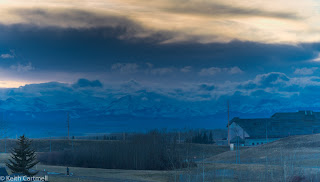