My readers really liked my political rant. That hit the all time top 10 very quickly! The recent rant on the ALS bucket videos, not so much. That's what's fun about doing the blog; I can never guess how popular something is going to be.

Today I was wandering around tying to deal with stuff on the way to writing this blog. With cats underfoot every step of the way. Then I get this look when I actually do sit down. Later on he was happier about it. 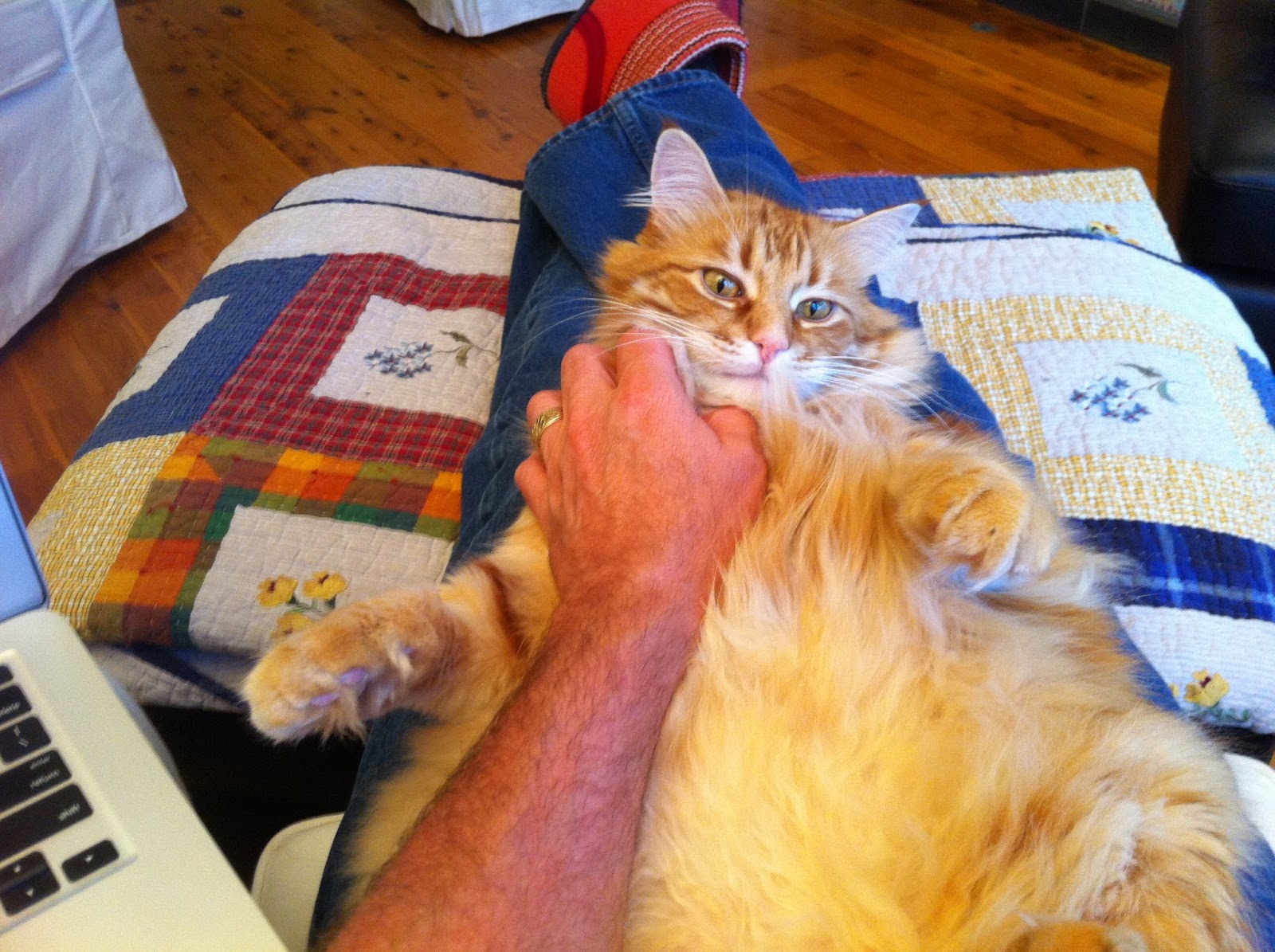 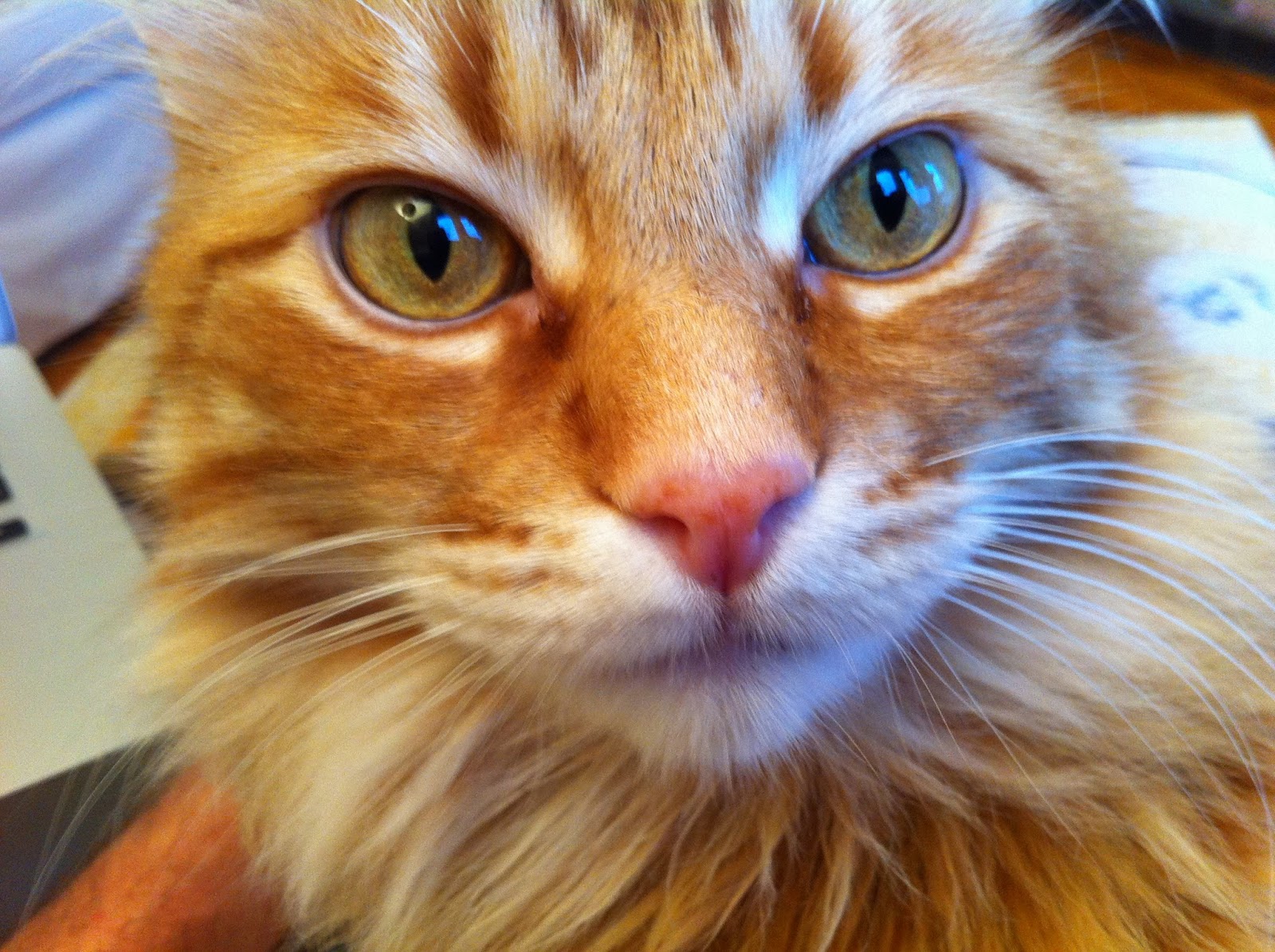 The pool was lovely this morning. Nice half hour swim with a variety of stuff, very nice.

This is where it gets highly technical, describing what I was thinking about during my swim. If you aren't a swimmer, you might want to go on to the next blog.

Most people get their arm out in front of their head ok, then it goes all wrong. They don't enter the water cleanly. Then they push down on the water, trying to roll their bodies, most often trying to breathe or get their head out of the water. Then they grab a handful of water and bubbles and try to throw it backwards while leading with their elbow. No wonder they aren't swimming quickly, and that's without talking about anything else.

Just so you know where I'm coming from, my test today was 50 m, 43 seconds, 40 strokes, counting each arm. Assume 3 seconds each push off (start and flip turn) where my arms aren't moving, so 20 strokes per arm in 37 seconds is 1.85 seconds per stroke. Let's just say half the time is recovery, with my arm either leaving the water or out of it. Down to .925 seconds. I'm guessing that two thirds of that is the actual power stroke, pushing against the water and where my arm is moving slowest, so that's .616 seconds. That leaves .308 of a second for my hand and arm to enter the water and get vertical.

Blinking your eyes takes about a tenth to a third of a second. My times might be a bit off, but the time from my hand entering the water to the time the power phase is done in a small number of eye blinks. That's the piece I was working on today.

Clearly this happens much too quickly to consciously control. This is where practice and the water feel comes in. The idea is to get your hand and forearm as vertical in the water as soon as possible, as far forward of your shoulder as possible. That gives you the longest possible time to have your hand and arm anchored so you can move your body past it, with your elbow high throughout.

I was working on feeling the water as my hand slid in, then trying to angle it down while catching water, just as if there was a beach ball or barrel under my forearm. Not pushing the water down, but inserting my hand into the water like a knife into a cake. Just like the wind over an airplane wing produces lift at right angles to the wind direction, I'm trying to produce forward motion. Remember when you were a kid, waving your hands out the car window? Angling your hand up or down just a little moved your whole arm pretty quickly. (Yes, I realize kids that grew up when almost every car is air conditioned have no idea what I'm talking about.) And it isn't even my whole hand at first; it starts with bending the fingers ever so slightly to initiate the catch, as the very first step to getting vertical.

But I'm getting ahead of myself. There is the small fraction of time from where the hand enters the water and extends forward to the full reach of your arm. Some people say you should glide like this a little bit, since this is when your waterline is longest. However long you glide will depend on exactly how fast you are going, and how efficiently you can pull. As you extend your hand forward is where you bend your fingers to start the catch. All this should be very clean, with as few bubbles as possible. Generally I look straight down, but today I was trying to peek forward to see what the bubble situation was. Bubbles are bad, generally speaking.

This is all very subtle, and comes from feeling the water over the very tips of your fingers. How far the fingers are apart, where the thumb is throughout, exactly how cupped the hand is will be slightly different for everybody, depending on their exact body mechanics and speed. I was playing with some of these variables and seeing how it felt.

This feel of the water over your hands and past your body is all important, and it goes away fast if you don't swim. It goes away faster than your fitness. Almost as fast as a boy's first time. Most people think they have lost fitness when they can't swim as fast, but it's more likely the water feel is gone, leading to a poorer stroke. I've had my 1000 m time change by as much as a minute within a week, just because the feel is there one day, and not the other. Fitness doesn't change that fast.

My experience has been that if I swim twice a week I just barely maintain the water feel. Three times a week and I'll improve. Four times a week, but not every week in a month is perfect for me to improve my swimming, and yet not beat up my shoulders.

I rarely think about trying to swim fast. Even when I'm doing intervals I'm not thinking about going fast. I'm thinking about technique, trying to be clean in the water, trying for a good stroke, and trying to nail my flip turn. A clean technique means you can swim faster, and probably with less effort.

Many coaches give their athletes a ton of drills. I don't agree with that, with a couple of exceptions. If you want to get better at getting your forearm vertical in the water soon, swim with your hands in a snug but not clenched fist. It will feel like you're flailing, but that's ok. There are some other drills that are good for teaching specific aspects of a stroke, but unless someone is watching it's much too easy to cheat the drill, and that's a waste of time.

The secret is swimming lots while thinking about your stroke. I look at my time every 50 m, and if I'm more than second slower than I expect, I start paying attention to my stroke to see what I'm messing up. How much is lots? Depends on your goals. You should be swimming your goal race distance at least once a week, even if you're doing Ironman. Not your first week, of course, you have to build to it. If my goal race was a half iron next summer, especially if I was doing the swim leg of a relay (hint, hint) I'd be looking at swimming at least 2 K every swim, minimum of 3 times a week.

If you're learning to swim you will find it enormously tiring at first. It's odd, but a sloppy slow swimmer is getting a better work out than clean fast swimmer. Swim what you can, rest if you must, and try again. I swam lots in my early 20's, to the point a 20 minute 1000m didn't even get my heart rate into the aerobic zone. Then I stopped for many years. I thought it would be easy to get there again. Not. It was brutal at times, and took years. The first time I did it again I nearly puked. The next time a couple of days later I was 20 seconds faster and felt great.

You have two goals as you learn to swim:

One is to extend how far you can swim at a steady pace. Part of this is finding out where your cardio and muscle endurance is. But once you can hit about 8 minutes straight, you should be good for quite a bit longer. It might take a long time to get to that eight minutes, but very soon after that you'll be doing twice and three times that. Keep track of whatever pace this is.

Two is to swim faster by swimming clean for a much shorter distance. Probably 25 m at first, then later 50. Aim for several to 10 seconds faster than your regular pace. Get your breath mostly back, then do it again. Build to doing 10 reps, then start shortening the rest, or swimming faster. You will notice that your regular pace is faster too, without really trying.

Since many of my readers are women, I looked for a male swimmer model. Just because. Get a drool kleenex and check out this amazing video. I mean, the stroke is amazing. (Try not to drool too much!) Look at the data they give in the lower right corner. Look how few bubbles he produces. Look how steady his head is during the body roll. Look at the bent elbow so far forward of the body. Look how frigging fast he is going! His easy pace is faster than I can swim all out. Then again, I don't want to think about how much practice it took to get this good.

This video is an age group woman swimming in an endless pool, with a coach giving lots of good comments. I specifically like what she says about head position. Here's one of a superb female swimmer who has a really high stroke rate, but as the commentary points out, still has the classic elements of a great stroke. If you've got shorter arms, have the cardio, and can maintain the turnover, this might work for you.