This is the only animal that made the 28 words. What you're going to get is where my brain goes as I think about the words you've given me. Who knows where this could end up?

The Calgary zoo used to have one, not sure if it still does. They are difficult and dangerous creatures, prone to marking their territory with their pee and poop. I never paid them much attention, being much more interested in the tigers and other cats, the bears, the raptors, the elephants, and moose. Calgary zoo has never had any sharks, as far as I know, and that's probably a good thing.

There was the zoo hippo, floating in the water, not saying or doing much. Who wouldn't walk past them to get to the elephants? Elephants are much more interesting. Except as I was preparing for this I happened to see a thing on Facebook. 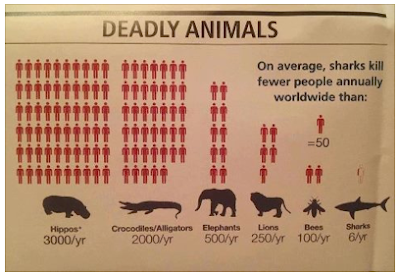 I didn't believe it at first. Hippos? Crocs and lions I can believe. They are clearly dangerous predators. Teeth in powerful jaws. As Calvin says about tigers, 5 out of the 6 ends are pointy. Elephants, besides being interesting, have those great tusks and that enormously strong trunk. But it turns out that hippos are very territorial, reacting badly to humans, and presumably other creatures encroaching on their space. They don't like people between them and the water, and being between a mama and her baby is likely to be fatal.

Turns out they aren't floating, but just resting on the bottom of the body of water. They love being in the water and have webbed toes, but can't really swim. Here's a video of a mom and baby cavorting in the water, complete with farting. They are strong enough to upset boats and savage the people that used to be dry.

I hadn't thought they had sharp teeth, but they do. I guess they have to deal with tough vegetation, and like eating meat. There is a case where they bit the head and shoulders off a full grown man. I'm not even sure a lion or tiger could do that in one go.

The really surprising thing is how fast they can move, up to 30 mph depending on the source you consult, and I guess, depending on how mad it is at you. Outrunning it in a straight line does not seem like an optimal strategy, as Spock would say. I can't find any info on how well they corner, but I'd be surprised if it was good.

There is certainly no way I could outrun one, but then, there isn't much I can outrun. Which sometimes is good. Very good. There hasn't been much running in my life lately. Not so much biking either.

Swimming has been going pretty good, though. I left work about lunch time today and headed for the pool. I had a lane to myself again. Swam 50 minutes. 1 K 18:50 or so, another K of dolphin kick and pull, then 4x50 on 60. That fell apart. After a bit of rest and some stretching a 42 second 50m! That's fast for me. Cool down. For some reason the afternoon swims seem to go much better for me. Further, faster, nicer. Not sure why. Maybe it's because I'm up, my blood sugar is better.

Could I outswim a hippo? Turns out not even close. No human can. They've been observed swimming 8 Kph. Maybe that's just running along the water bottom. (Head for deep water, and hope for no crocs.) No wonder hippopotamus is Greek for "River Horse". Those ancient Greeks were more on the ball than you knew.

This should be a warm weekend for us, above zero. Today was well above freezing, maybe 4 or 5 degrees, so the 17 Ave pubs opened the patios. There were people out there, drinking beer in the sunshine. Apricating. (Which isn't one of the 28 words, if you were interested, but it is a real word, and one of my favorite activities when I get the chance.) No sunscreen needed yet. Hippos can secret their own sunscreen. There are days I wish I could secret my own sunscreen. They seems a handy trait for a triathlete.

I just watched a video where a hippo wanders along and starts browsing on a dead water buffalo. There is a full sized cat, a lioness I think, just sitting there, waiting it's turn.