I love and hate this word. Everything in this world, and presumably the entire universe moves to it's own rhythm. One of the ways I know when I'm doing things right is that they feel in tune, everything flows. Sometimes I've known within seconds of starting a workout that it was going to be good, and a few times I've known before starting. Every now and then things start out clunky, then I get into the groove.

Sometimes you can see a team playing together this way, and it's amazing to see. The players just know where the other people are and what they're going to do. The puck, or ball, or whatever seems to be on a string under complete control. Even work can happen this way, with the query and data all being in tune.

I hate it because it's a bitch to spell. This is one of those words that flat out has to be memorized, and there's a reason you don't see me winning any spelling bees. I clearly remember in grade three reading our english book, seeing the "island" and somehow knowing it was pronounced "eyeland. A few minutes later one of my classmates, reading out loud, pronounced it is-land. This is one of the reasons English is complicated.

Oddly enough, I clearly remember that grade three reader. It was yellow. There was an Arthur C Clark story set on the moon lamenting the state of Earth. One about the first underwater round the world trip in the first nuclear submarine, the Nautilus. There was a story about a kid somehow going back in time with a car to rout the enemies besieging a city during (I think) the Ottoman Empire. Does anyone else who went to early grade school in Ontario in the early to mid 60's remember it?

One of the troubles in trying to stay fit is getting in the groove with everything else. There's lots of times I'm at work and want to go for a run or a bike ride, and have none of the stuff necessary. I sometimes find that I don't have enough jam to go for a workout before eating, yet know that if I eat, I'm not going at all. Sigh. If it were easy then everybody would do it and it wouldn't be fun anymore.

It's nice when the rhythm of your life brings you to new experiences that can build on what you've done, or you start something new somehow knowing that it's going to fit down the road.

Not to get all new age on you guys, but there are lots of times I think that we are part of a greater whole. That we are all connected at some level, even if we don't understand it very well. Anyone talking about telepathy or other 6th sense stuff is under a lot of onus to prove that's the only way something will work. But there's something that we "feel" about other people as soon as we meet, some we feel a rapport with, and others rub us the wrong way. One of the worst things a woman can say about a guy is that he's a creep, or that he makes her feel creepy. Yeah, sometimes it's totally clear why, but other times I don't get it at all.

What I do get are these photos. This is unretouched. No Snapseed, no nothing. It was an amazing sunset.

Linda brought home bison and Yum buns today. So I HAD to haul out the BBQ, and do up the bison burgers that Linda had made with her special ingredients, including a splash of the Tempranillo wine that I'm still working on. I'd sliced up some smoked Gouda for on top. It didn't quite melt but was nice and soft. Plus other Yum Bakery treats for desert.

Today's run is an example of being just out of rhythm. It was ok, but my feet felt a bit heavy and slow. I wasn't trying to run fast, ending up doing 5 K in 33 minutes. Maybe that shouldn't be a surprise considering how little I've run lately. I went in the morning while it was still just below zero so I wouldn't get wet feet from water and slush. The new tights from Sport Chek were just a bit warm in the sun, so I think they'll be great for colder days. At the end I was tired, and things were beginning to fall apart, so I think I picked just the right distance.

I've been playing with the Runmeter graphs, and there's lots of stuff one can do with them. Very cool for a data geek like me. I'd really like to know if my run speed varies as much as the graph says it does. Really must run with someone who's using a garmin, and compare the outputs. Maybe on Feb 9, SUAR fans? My buddy Dano is in, how about the other usual suspects? 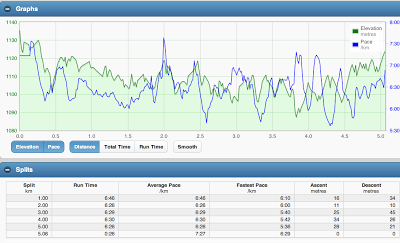