I do not propose to bore you with a long lecture in statistics. Unless of course, you are deeply interested in the proportion of negatives which are correctly identified in a binary test and the closely related concepts of type I and type II errors. But if you ARE interested, you already know. And if if you AREN'T interested, you've probably already fallen asleep in a stats class, and I don't like my readers falling asleep.

However, one of their illustrations compares the results from a colonoscopy to the fecal occult test, which happens to be one of my experiences from the last little while. Neither was what you'd call fun, unless you're even more perverted than the people doing Ironman.

My first experience hearing about a colonoscopy was a buddy who had Crohn's disease. She was telling me about her various ordeals, and the point of the story was that once she realized half the hospital staff had seen her butt, she had lost all sense of personal modesty. It had never occurred to me that someone would mount a camera on a flexible tube, and push it where the sun don't shine. I was still very young in some ways.

There was a thread on various blogs about locker room behavior. People shocked or uncomfortable by other people walking around in the nude, conversing, showering without drawing the curtain (there are curtains??) and other such behavior. I get a kick out of some of the people changing at the pool by trying to wrap a towel around themselves as they change. I don't get it. It's just skin.

One advantage of the internet is that you can find pictures or descriptions of almost anything that might interest you. This might be partly why we are more open about various diseases. It used to be that cancer was too terrible a word to use in open conversation, except to whisper that someone died of cancer. My buddy was very open about having Crohn's, and what the impact on her life was. It blighted a few conversations, but she didn't care.

Then I was put on the list for it, purely because of my age. Otherwise, there were no indications at all. It took a couple or three years for me to bubble to the top of the waiting list. In the meantime, as I recently found out, some people from the Helios Clinic jumped the queue. That's dirty pool. If our system triages people based on urgency, it's not right to let people jump the line for other reasons, like the ability to pay.

I am very interested in Kurzweil's thoughts about the singularity, and our brains merging with what we now call computers. At the same time we are making astonishing advances in medical technology. We are on the cusp of being able to grow a liver or kidney on demand for a specific person by taking a scraping of skin cells. Imagine that, being able to regrow organs and have them transplanted to replace a failing one. We would live much longer than we do now, perhaps as long as you could keep your brain interested in what's going on. I don't read about anyone talking about replacing brains, just merging our consciousness with machines. I'm old enough that it's going to be a near run thing, to get the technology on line while I'm still young enough to be able to take advantage. You kids reading this, stay healthy, your life is going to be amazing.

In my ongoing road to planet fitness, tonight was a run. It started off a bit clunky. A while ago I'd bought a pair of winter tights, and they turned out to have a seam that irritated a sensitive portion of anatomy. I tried wearing the Under Armour tights under them, and it turned out to be pretty snug. Very snug. I could hardly move my legs. I think those tights have shrunk. So if you're about 5'6" to about 6 feet, no bigger in the legs and butt than I am, and are interested in a pair of winter tights (washed, obviously!) let me know.

Only 5 K, aiming for about a 7 minute pace, and it ended up being a bit quicker. It took almost 2 K to get going, and the last bit was a slog. There is a ton of ice to cross roads and some driveways. It's that flat slippery stuff, with some water on top. Oddly enough, I don't mind running on it, and very rarely slip. Walking is a bit of a different story, but it was ok tonight. Here's the RunMeter graph. I'm not so thrilled with how they do the map now, a square is much better than this wide rectangle. I simply don't believe the elevation numbers. There is no way there is a 25 m hill in the first quarter K. Maybe 2.5 m. 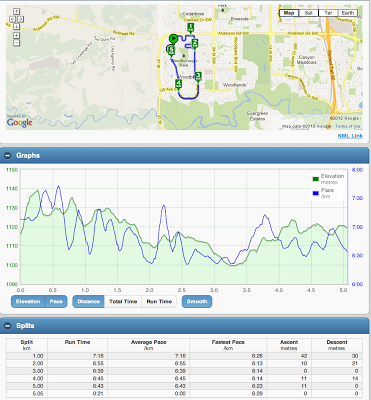