In case you hadn't noticed, today if February 15. In Calgary.
Does that and this normally go together?

Thought not. We had a bit of typical winter earlier on, but the last couple weeks have been warm, just around freezing. Today was almost hot, 10 C (50 F) so even though I'd swum in the morning, and had a big lunch, I had to get out for a run in shorts and SUAR shirt while it was so nice out.

One can discover the most interesting things when you look through a database in detail. Lately I've been working on cleaning up Asset Types and Asset Descriptions. Some things naturally go together. Some things could go together, and you can't decide until you look in more detail, or get more information. Other things don't go together at all. It is not possible, for example, for a Treater to be an asset type Air Receiver. It's just not.

I've been spending a lot of time looking at lists of things, sorted and filtered different ways, trying to find like things, while remembering other odd things I discover along the way. I make lots of notes. Sometimes I don't realize that there are entire separate groups. Just today, for example, I discovered that that the coolers on compressor drivers could be in 3 places, each with some naming drift. One is a group starting with Engine, another with Jacket, and a third with Water. Until I had seen each separately, there was really no way I could get them beside each other to actually compare the names. Gotta love SQL, once you know what to ask for.

This is why I get paid, to sort out issues in databases. If things were perfect, I wouldn't get hired, and I'd have to go find honest work I probably wouldn't enjoy near so much. But really, there are two parts, there is the database itself, and the people that work with the database. Both can be the problem.

The database is the innocent party in this. All it knows is what it's told. It might be badly built, making it easy to enter erroneous data. I have frequently astonished database owners and users with what is in their database. Often they are blissfully ignorant till it comes time to migrate the data, or actually make use of it. They don't believe it till they are shown. The good managers accept what they are shown, and want to make it better. The bad managers don't believe, and when they accept reality, their next step is to discipline the workers involved.

Sometimes the people involved are innocent as well, victimized by processes they had no hand in, and working under instructions to do only as they are told. So when they get a piece of paper with nonsense on it, that nonsense goes into the database. They might not even care much if the paperwork is messy, and will guess at what's on it. This goes along with a lack of knowledge about the assets in the database.  There is a huge difference between a Flare Tank, and a Flash Tank.

Until you work with both together, and figure out some good process, you'll recreate the same problems you had. Many companies carry on in their worlds, thinking they are doing ok. It's only when they start losing money, or look bad in benchmark comparisons to other companies that things have a potential to change.

People are the same. We've carried on with an old something, because it still worked. Then when you suddenly see how much brighter and clearer the new TV's are, and how coarse and dim the old one is, and how inexpensive the new ones are, it gets harder and harder to watch the old one. It doesn't matter it is, the same process happens. We wondered why a food processor wasn't working very well anymore after years of service, and found out by accident that the blade was as dull as used dishwater.

Anybody watching the pool this morning would have had an interesting view in the 50 m pool. In the far several lanes was a swim club. Coach yelling, kids going zoom. Then me and another guy, going swoosh, more or less. Then beside me in the next lane was a guy doing a very slow version of front crawl. There was so many bubbles it was hard to see what he was actually doing. I don't want to be a creep about it, but I love watching fast swimmers to try to figure what they are doing. There are days being really short sighted sucks.

In the water 45 minutes. Much the regular stuff.

Ran this evening, hoping again for a nice easy run, but my legs took me on one of the fastest training runs I've ever had. My feet felt light and fast. Plus running in shorts! How nice is that at this time of year? I got into the groove early, did some strides going up hill, tried to take it easy going downhill, and just in the last little bit my legs started getting sloppy. Long stretch session after, with some core, including plank. This wine tastes really good. All in all a great start to the long weekend. 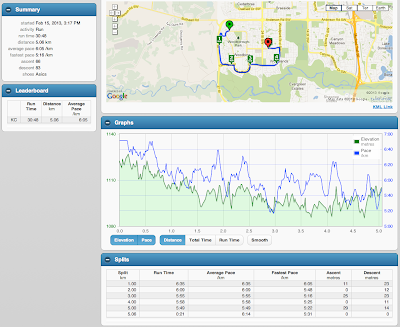