My left wrist, and 11 again

Finally, a good night's sleep! After a slow start I headed downstairs. I wasn't too sure what would happen. I'm liking this about not having a plan. Because I was feeling a little creaky I started with some stretches and some core. Including the dreaded plank. 1:15, I was astonished!

Then onto my bike. I had lots of water and some snacks this time. After an easy warmup and some spin ups, I started in with 15 minutes at endurance pace to see what my legs would think. So far so good, so I upped it to about 75% of FTP, and settled in. Nothing on the computer, no tunes. Just me and my feet. Every 15 minutes I stood, gradually making the standing sessions longer, and then as soon as I sat down and got back into my gear, I spun it up, making each session faster. The second last one I topped out at 140 rpm and 300 watts. Then I'd get back in the groove again. Snacking. Drinking. Thinking about form. Daydreaming about riding out 22X on a beautiful day.

It turned out to be a super ride. I was on the bike 2.5 hours, and of that, 1.5 hrs was at 75%, nice and steady. Breathing easy, for most of it I could breath through my nostrils and get just enough air. Heart rate was pretty stable, very slowly rising from mid 120's to low 130's. Sweaty. Cooled down and stretched after. Happy! The only thing that hurt was my left wrist. I had to keep shaking it out. But this is typical for my long rides. I think since I broke my right elbow, I've been putting more weight on my left side.

My buddy with the broken wrist is now interested in speed laces, for obvious reasons. I've no idea the brand. I buy them whenever I get a new pair of shoes. They look like this: 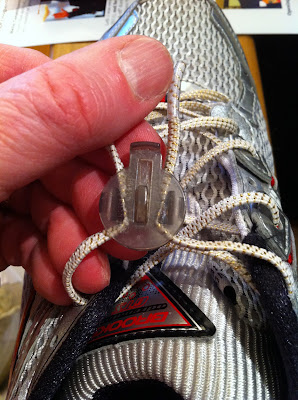 It looks like you hold the lace ends and tug the circular holder to snug up the laces, but that's not it at all. What you do is thread the laces through the eye holes however you like and slide the end of the laces into the holder and out the other side. Then you slide in the locking wedge. The trick is to have the laces so the shoe is loose on your foot, but just snug enough so you don't run yourself out of them. It usually takes me several tries to get them adjusted right, but it's worth the trouble. As long as you own the shoes you never have to think about laces. Slide your feet in and you're done. The application to triathlon is obvious, but even if you only run, it's still good. It's easy to tie laces too tight and that's not good for your feet.

I got tagged by aka Alice of Hefferblog fame with the 11 things thing. You can see my previous blog on this topic here, if you should be so minded. But since this is my second time I'm going to do things a little differently. I'm assuming you've seen this elsewhere and know the deal. The only tagging I'm going to do this time is to say that if you think I should have tagged you last time and didn't because of my unfair and arbitrary method of choosing taggee's, you can consider yourself tagged, but you have to answer the question "why Keith should have tagged me" with 11 different reasons. I am confident I don't have to go looking for responses.